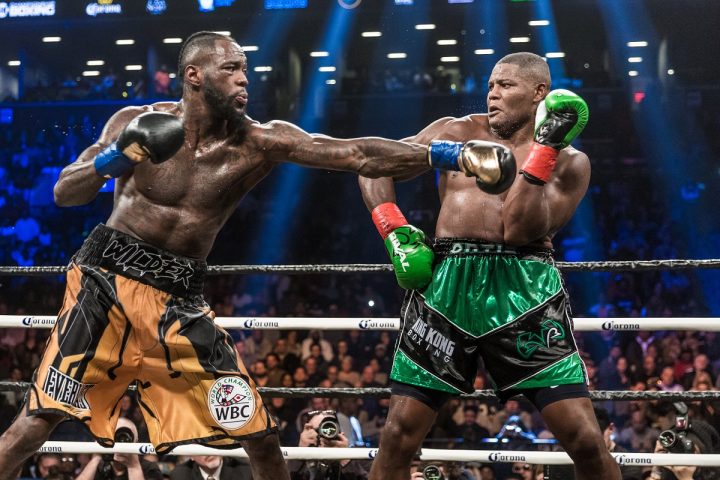 Parker marvels at Deontay’s one-punch power, and he sees him as having too much for Joshua to deal with when he two finally enter the ring.

Parker thinks Joshua is delaying the Wilder fight on purpose. What Parker means by that is it’s possible that Joshua is going to try and wait for the 32-year-old Wilder out until he’s lost some of his physical skills before he faces him. Joshua might not feel that he’s mentally capable of beating Wilder. It looks to many people in the boxing world that Joshua is simply afraid of Wilder, and doesn’t want to take the fight. Joshua’s recent weight loss and his new style of fighting shows that he’s not comfortable with how his recent fights against Parker, Carlos Takam and Wladimir Klitschko went.

In Joshua’s last fight against Parker, he adopted Wladimir’s fighting style entirely, and he spent the entire fight boxing, moving and tying Parker up. Every move Joshua made in that fight looked like a carbon copy of how Wladimir used to fight. Of course, Joshua didn’t possess nearly the same athleticism, mobility or the shot-blocking ability that Wladimir had in his prime. It’s impossible to copy a talent like Wladimir and have his entire game down pat 100 percent after just one fight.

Joshua disappointed millions of boxing fans last week when he decided not to face Wilder next. Instead of facing Wilder, Joshua will be defending against his World Boxing Association mandated mandatory challenger Alexander Povetkin next.

“Personally I think Deontay Wilder takes it. Even though he is wild by name and nature, he is loose, elusive and has power,” Parker said to RadioLIVE.

Wilder has the speed and power advantage over Joshua. Wilder also is a lot more limber by nature because he doesn’t lift weights like Joshua does. Joshua is too heavily muscled for him to be able to fight hard at a fast pace. We’ve seen Joshua gas out against Wladimir Klitschko, Carlos Takam and Dillian Whyte. The only reason Joshua didn’t gas out in his last fight against Parker is because the referee prevented inside fighting. Once inside fighting was taken away by the referee Parker never stood a chance of winning because of his lack of reach in comparison to the taller 6’6” Joshua.

Parker, 26, lost to Joshua by a 12 round unanimous decision last March in Cardiff, Wales. The fight was an unfair one in the eyes of some boxing fans due to the referee not allowing inside fighting. Not allowing inside fighting prevented the shorter 6’4” Parker from being able to land his shots at a distance that he needed the fight to be fought at for him to have a chance at winning.

Parker thinks it’s odd that Joshua wouldn’t take the fight with Wilder given the huge amount of interest in the fight from the boxing fans.

“After the fight with me he called [Deontay] Wilder out, but it seems to me he keeps changing his tone despite Wilder clearly wanting that fight,” Parker said to RadioLive. ”He [Wilder] wants to unify the division. I speak to him often and can really sense that passion he has to be undisputed champion.”

Joshua’s promoter Eddie Hearn is talking about wanting to put the unification fight against Wilder in early 2019 on April 13 at Wembley Stadium in London, England. In what has to be interpreted as a bad sign, Hearn is saying that Wilder’s purse for the fight against Joshua next year will be $15 million. That’s believed to be a flat fee that is just a little more than the original offer of $12.5 million from Hearn. In response to Hearn saying that his offer of $15M is still on the table for early next year, Wilder said that his asking price now for a fight against Joshua is 50-50. Wilder wants parity when it comes to the purses, and unless he gets it, Joshua isn’t going to be able to fight him.

“Joshua wants to unify too but I don’t think he thinks he is ready for Wilder,” Parker said.

Well, Joshua is about to turn 29-years-old. If he’s not ready for the Wilder fight soon, then I don’t know when he ever will. When a fighter is hitting 30, they’re supposed to be able to fight the best in their respective weight classes. George Foreman was only 25-years-old when he defeated heavyweight champion Joe Frazier years ago. Foreman wasn’t stalling on the Frazier fighting, waiting for him to get old enough for him to have a better chance of beating him. If Joshua is trying to age Wilder until he’s vulnerable, then it would be truly sad because that’s a cheap way to win. Wilder is 32-years-old now, and he’s not showing any signs of aging yet. Unless Joshua is going to wait eight more years until Wilder is 40-years-old before facing him, he’s wasting his time trying to wait him out. I suspect that Joshua isn’t going to age as well as Wilder because he’s not limber, light on his feet like him, and he’s carrying around all those useless bodybuilding muscles.

Even when Joshua was weighing 225 lbs. in the 2012 Olympics, he still looked over-muscled. For some reason, Joshua has too much muscle for his own good and that hurts his stamina when he’s forced to fight hard for a full minute. It only takes one hard minute of fighting for Joshua to get tired. We saw that in Joshua’s fight against Dillian Whyte in the 2015. Joshua gassed out in round 2 after Whyte pushed him hard for one minute of the round. Joshua weighed in the low 240s for that fight. After gassing out, Joshua stayed tired until the 6th round. The only reason Whyte wasn’t able to take advantage of Joshua’s fatigue is because he injured his left shoulder in round 2 and he couldn’t use the arm for throwing power punches after the injury.

“He has scary one-punch knockout power,” Parker said about Wilder. ”I’d take him to win, but boxing is a funny game and I could be proven wrong. He [Joshua] wants to take that fight at the right time for him,” Parker said.

If Wilder is able to land one good shot to the head of Joshua, he could stun him. Once Joshua is hurt, Wilder would quickly finish him off just like he did against Bermane Stiverne.