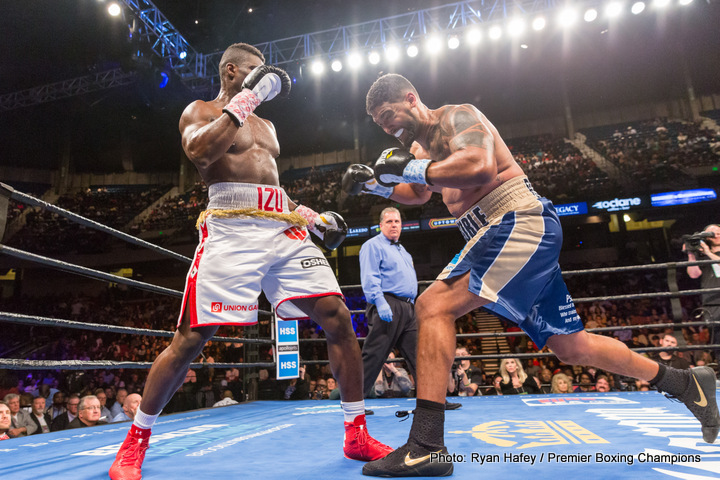 By Scott Gilfoid: Dominic Breazeale (19-1, 17 KOs) is hoping to put a wrench in the plans for a big money unification fight between WBC heavyweight champion Deontay ‘Bronze Bomber’ Wilder (40-0, 39 KOs) and IBF/WBA/WBO champion Anthony Joshua (21-0, 20 KOs). Breazeale, #2 WBC, figures to be Wilder’s next opponent now that Joshua has signed to defend against his World Boxing Association mandatory challenger Alexander Povetkin (34-1, 24 KOs) on September 22 at Wembley Stadium in London, England.

Wilder doesn’t need to defend against the 6’7” Breazeale, as his WBC mandatory isn’t due yet, but it’s imperative that he faces the best available contender in the WBC’s rankings. Breazeale is best possible opponent that Wilder can fight right now before the end of the year that compares to Joshua’s opponent Povetkin. Promoter Eddie Hearn has been saying recently that Joshua beating the 38-year-old Povetkin will do more to increase his popularity than it will be for Wilder to defeat Breazeale. I don’t think that’s the case.

As far as I can tell, Breazeale and Povetkin are rated the same by the boxing public. Neither of them are well known with casual boxing fans, and both are viewed as flawed guys by the knowledgeable fight fans of the sport. Breazeale has the better wins recently than Povetkin with his victories over Eric Molina and Izuagbe Ugonoh.

“I’ve paid close attention to Deontay’s last three fights, and I’ve seen a lot more weaknesses than I’ve seen strengths, particularly when he has someone hurt,” Breazeale said to Premier Boxing Champions. “When you smell blood, you’re supposed to go in for the kill, but his fundamental skills aren’t there and he falls apart,” Breazeale continued.

Breazeale doesn’t seem to seeing things clearly when it comes to judging Wilder’s performances against fighters that he hurts in his fights. The 6’7” Deontay has done an admirable job of knocking out his opponents when he has them hurt. When Wilder has someone hurt, he goes after them and stops them immediately. The only fighter that you can say that Wilder let hang around after hurting is Luis ‘King Kong’ Ortiz, who he knocked down in the 5th round last March but then he didn’t try and finish him. That was obviously a mistake on Deontay’s part to not try and finish the job. It almost came back to bite Wilder in the backside two rounds later when the talented 6’3” Ortiz hurt him with a left to the head in the 7th. Ortiz caught Wilder with a left in the midst of him loading up with a right and bomb after he trapped the Cuban fighter against the ropes. Wilder never saw the shot coming, and he was immediately hurt. Ortiz then hit Deontay with everything but the kitchens sink in trying to finish him, but he couldn’t do it. The rest is history. A badly hurt Wilder survived the 7th and 8th, and came back to wobble Ortiz in the 9th and knock him out in the 10th.

“I won my last fight to become the WBC’s mandatory. Deontay Wilder has the WBC title, and that’s the one that I want,” Breazeale said.

The 32-year-old Breazeale defeated former heavyweight world title challenger Eric Molina by an 8th round stoppage last November in a World Boxing Council title eliminator bout to become Wilder’s mandatory challenger. Breazeale has been waiting ever since for his title shot against Deontay. Breazeale waited patiently while Wilder’s management tried in vain to make the unification match against Joshua. It was a complete waste of time, as it appeared from the start that there was no true interest from Joshua’s promoter Eddie Hearn in making the fight. The biggest hint that Joshua and Hearn weren’t interested in making the fight against the dangerous Wilder is when they turned down a $50 million guarantee to fight him. For a fight that supposedly will make $50 million at the most, according to Hearn, it was insane that Joshua turned down a $50 million offer to face Wilder.

Now that Joshua is out of the picture for a Wilder fight, perhaps permanently, Breazeale has his chance to capture the number one belt in the heavyweight division. The fight needs to be negotiated so that these two titans can go at it to shake up the heavyweight division. The sight of two 6’7” U.S Olympians trading blows in center ring will be a real treat for boxing fans worldwide. The winner of the Wilder vs. Breazeale fight can then look to try and put a fight together with Joshua, although I think it’s very doubtful the unification fight will happen if Deontay is in the picture. Hearn made it clear on Monday that he’s not going to improve the $15 million flat fee offer for Wilder no matter what. That’s all he’s willing to offer him, and obviously that’s not going to fly. As such, Joshua and Wilder appear to be destined to go in separate directions permanently. That’s why it’s important for Wilder to face the best possible opponents that he can in order to increase his popularity enough for him to become a pay-per-view attraction in North America. Wilder will have a tough time, as it’s not easy to become a PPV star in the U.S, as it’s one of the toughest markets to break. In the UK, it’s pretty easy to become a PPV star. I mean, look at Dillian Whyte. He’s a heavyweight with average boxing ability and not much charisma, and yet he’s fighting on PPV. I hate to say it, but Whyte would never be a PPV in the U.S. He lacks the talent to get the attention from American fans. Even Joshua would likely not become a PPV star in the U.S. He doesn’t fight the right guys, and he’s utterly flawed as we saw in his recent fights against Joseph Parker, Carlos Takam and Wladimir Klitschko.

Deontay needs to beat Breazeale to keep alive the chance of a unification fight against Joshua down the road. The boxing world wants to see a unified world champion at heavyweight, so there’s always the chance that the pressure from the fans will force Hearn to give Wilder the 50-50 purse split that he’s demanding for him to face Joshua. Wilder and Joshua need to win their next fights to see if a possible fight between them can take place on April 13 next year at Wembley Stadium in London, UK. Wilder has the more dangerous opponent in Breazeale. These guys are both the same size, and both can punch. The 6’6” Joshua will have a huge four inch height and six inch reach advantage over the 6’2” Povetkin when the two of them meet on September 22 at Wembley Stadium. The 28-year-old Joshua also has the hometown advantage as well as the youth advantage over the 38-year-old Povetkin. With all that going for Joshua, it’s not surprising why he wanted to fight Povetkin rather than Deontay. There’s not much of a threat of Joshua losing to Povetkin. Wilder would be a major threat to Joshua and his title reign. He’s had it pretty easy fighting in the UK against flawed heavyweights since he turned pro in 2013.

Wilder has to take care of his WBC mandatory Breazeale first before he can worry about resuming the negotiations with Hearn and Joshua. Given Hearn’s tight-fisted stance in the Wilder vs. Joshua negotiations, it’s extremely doubtful the boxing world will see them facing each other on April 13 at Wembley Stadium. Hearn has already said that his Matchroom fighter Dillian Whyte is his Plan-B for Joshua to fight on April 13 if Wilder doesn’t agree to accept his $15 million flat fee offer. I think it’s pretty much academic at this point that Joshua will be facing Whyte next April rather than Wilder. It’ll be interesting to see how much money Whyte gets for fighting Joshua. I doubt that Whyte will get a $15 million flat fee offer from Hearn to face Joshua.