By Scott Gilfoid: Eddie Hearn once again is saying that he WON’T be improving the $15 million flat fee offer to WBC heavyweight champion Deontay Wilder (40-0, 39 KOs) to face Anthony Joshua (21-0, 20 KOs) next year on April 13 at Wembley Stadium in London, England. Hearn says that even though Wilder is getting a flat fee $15 million offer, he’ll wind up with 30 to 35 percent of the revenue for the fight. In other words, it’ll be a 70-30 or 65-35 in favor of Joshua.

Hearn says Wilder either takes the existing $15M offer or he’ll make Joshua vs. Dillian Whyte rematch for April 13 at Wembley Stadium. Hearn figures the Joshua-Whyte rematch will be huge if Whyte defeats former WBO heavyweight champion Joseph Parker (24-1, 18 KOs) on July 28 on Sky Box Office at the O2 Arena in London, England. What Hearn doesn’t know is the UK boxing public isn’t interested in seeing a rematch between Joshua and the 30-year-old Whyte (23-1, 17 KOs). They’re even less interested in seeing a rematch between Joshua and Parker, which may be what Hearn will be stuck with if Whyte gets beaten by Parker. Hearn is counting on Whyte defeating Parker so that he can make the Joshua-Whyte II fight after Wilder rejects his $15 million offer. The fight that Hearn seems to really want to make is Joshua vs. Whyte 2, but that `

“We’re going to send him a signed contract for Anthony Joshua,” Hearn said to IFL TV about his idea of sending Wilder a signed contract from Joshua for April 13 next year. ”We’re going to get this contract to Shelly Finkel all signed, and say, ‘There you go my son. All you’ve got to do is sign it.’ They’re going to say the deal only applied to the next fight. How does that deal only apply to the next fight when we’re having a bigger deal than you’re having?” Hearn said.

Instead of Hearn sending Wilder and his manager Shelly Finkel a signed contract for the April 13 fight, they should sweeten the deal by giving Deontay a percentage cut instead of a flat fee offer. Hearn is guessing that the Joshua vs. Wilder fight will only bring in between $40 million to $50 million rather than $100 million like some believe it will haul in. However, Hearn says that whatever money that it brings in over the $15 million for Wilder’s flat fee, it’ll go to Joshua after the expenses are taken out for the undercard and the cost of the show. In theory, Joshua could make a tremendous amount of money if the fight brings in more than Hearn’s rather conservative estimates.

Wilder isn’t going to take less for the Joshua fight. That’s the whole problem. Heck, Wilder isn’t accepting the $15 million flat fee that Hearn offered him for the September fight with Joshua. Wilder wants a 50-50 offer, and he doesn’t sound like he’s going to change his mind about it. As such, Joshua will be fighting the winner of the Whyte vs. Parker fight on April 13 instead of Deontay. Hearn says the seating for the Wembley Stadium will be increased by 10,000 from 90,000 to 100,000. But if Joshua does end up fighting the winner of the Parker vs. Whyte fight on the 13

th of April, there’s likely going to be a lot of empty seats a Wembly Stadium. I’m just saying. It might look like a ghost down inside Wembley. Boxing fans don’t want to see Hearn trot out Whyte for a retread fight for Joshua just because he doesn’t want to give Wilder his asking price. I mean, when you want the best, you’ve got to pay for the best. Wilder is the best in the heavyweight division. Whyte and Parker obviously aren’t the best, and the boxing public don’t want to see Joshua fighting those guys again. It’s too soon, and neither of them have done anything since they lost to Joshua. Whyte has wins over B and C level heavyweights like Ivica Bacurin, Dave Allen, Malcolm Tann, Robert Helenius, Lucas Browne and Ian Lewison.

”No,” Hearn said when asked if he’s going to improve the $15 million offer. ”You either take it or we watch probably the best heavyweight fight out there; certainly in the next couple of months, Dillian Whyte and Joseph Parker. If Dillian Whyte can knockout Joseph Parker, and Deontay Wilder doesn’t want the fight [against Joshua], we’ll just do Whyte-Joshua. Yeah,” Hearn said when asked if the winner of the Whyte vs. Parker fight is Joshua’s Plan-B opponent. ”But I want to make one thing clear; that’s not, ‘hopefully, Wilder doesn’t take the fight so we can take Whyte.’ We’re desperate for the Wilder fight. That’s what we want. But, by the way, he [Joshua] has an absolute machine to deal with in Povetkin first. Don’t worry about Wilder. That’s why we want to say, ‘sign it, done from our side.’ There’s no deadline. If you don’t sign it by the time the Povetkin fight is over, then we’ve got to make our move,” Hearn said.

There’s a belief that the plan along for Hearn was to match Joshua against Whyte on April 13 instead of Wilder. The first Joshua-Whyte fight wasn’t competitive. Why would Hearn want to force a rematch between Joshua and Whyte onto the UK public? It would be better for Hearn to do the fans a favor by giving them a good product in Joshua vs. Wilder instead of giving them tired old retread fights that they’ve already seen before. Hearn might as well sign Charles Martin for Joshua to fight.

As far as Hearn saying that he and Joshua are “desperate” for the Wilder, actions speak louder than words. If they’re interested in fighting Wilder, then they should give him a percentage deal so that the fight can get made. That would make the most sense, wouldn’t it? Offering Wilder $15 million in a fight that could see revenue well above $50 million, it doesn’t make sense unless you’re hoping to get him on the cheap. With the amount of interest from the boxing public in the UK for the Joshua-Wilder fight, it’s hard not to believe the fight pulls in $100 million. If Wilder agrees to the $15 million flat fee, Joshua is going to walk out of the fight with a huge amount of money in comparison.

”I want Deontay to see ink. I want him to smell it a little, because when you look down at the contract and see Anthony Joshua’s signature, all you’ve got to do is put yours in,” Hearn said of the signed contract from Joshua that he plans on sending to Wilder for the April 13 fight at Wembley Stadium. ”There’s 15 big ones and a chance to be undisputed heavyweight champion.”

”It depends on how the show does,” Hearn said when asked how much money Joshua will make from the Wilder fight if it happens. ”I think there’s between $40 and $50 million dollars in the fight in the UK. That’s not in terms of revenue. That’s in terms of the fight pot. You’ve got Sky pay-per-view. You’ve got the cost of the show. You’ve got the undercard. $40 million is a conservative number. So, probably 15 and 25 [million will be what Wilder and Joshua receive for the fight]. It could be 50 [million]. There’s a very good chance we make 50. So, 35 [million] and 15 [million is what Joshua and Wilder will be receiving]. It’s definitely over 30 percent for Wilder; probably closer to 35,” Hearn said.

I think it’s clear that Joshua will make big bank if Wilder chooses to agree to the $15 million flat fee. Hearn wants Wilder to sign it so badly that it seems that he’s losing touch with reality. It’s not going to happen. Everything that Wilder and manager Shelly Finkel have been saying in the last two weeks suggests that they will never agree to the deal that Hearn so badly wants him to accept. What Hearn should be doing is changing his tune and offering Wilder a split of the revenue. That’s the only way he’s going to accept a fight against Joshua. I hate to say it but Hearn is making a mistake by saying he’s not going to improve the $15 million offer. But it’s hard to know what’s going through his. Perhaps Hearn is pricing Wilder out so that he can keep matching Joshua against weaker heavyweights that he knows he can beat. Maybe Hearn wants to put Joshua in with Whyte three or four times? Frankly, I think it’s a waste of time for Joshua to face Whyte ever again, because the first fight was a boring mismatch after round 2. Whyte had no power and he was beaten up and stopped. 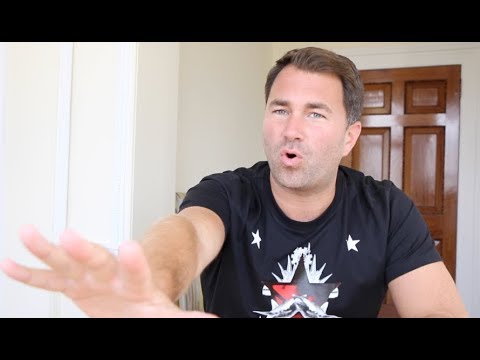 
« Jaime Munguia defends against Liam Smith on Sat. on HBO