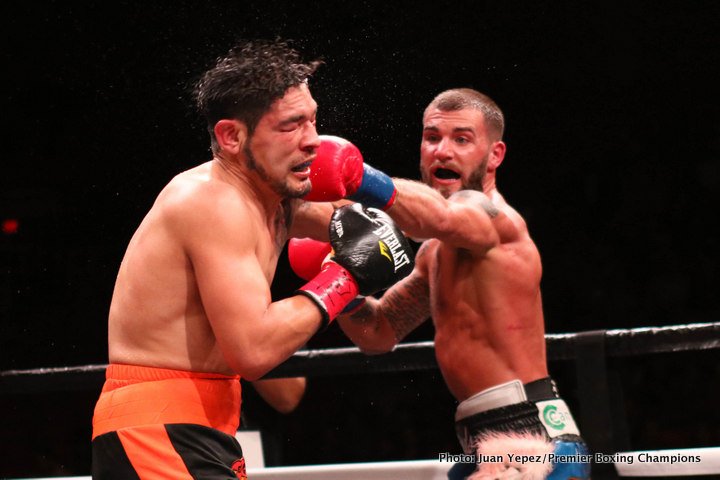 By Dan Ambrose: After four years as a pro, Caleb Plant (17-0, 10 KOs) is about to get a title shot against newly crowned IBF super middleweight champion Jose Uzcategui (27-2, 23 KOs). On Thursday, the International Boxing Federation ordered the 27-year-old Uzcategui to defend against #2 Plant in his first title defense. The IBF wants negotiations to begin.

It’s too bad the IBF didn’t order Uzcategui to face Plant for the vacant IBF title rather than installing him as the champion without having to fight for it.

Plant doesn’t have much experience against quality opposition. This is going to be a very tough fight for Plant, and he may not be ready. In Plant’s recent fight against the hard-hitting Rogelio Medina, he spent much of the fight on the run trying to avoid getting hit. It wasn’t much of a fight. It looked like Plant had no heart for mixing it up with Medina, which made it difficult to score the rounds. Medina was coming forward all night while Plant was giving rounds to try and keep from sustaining punishment.

Uzcategui was elevated to full IBF super middleweight champion this week after the previous IBF champion James ‘Chunky’ DeGale vacated his title on Wednesday. The IBF turned around and elevated interim IBF 168lb champion Uzcategui to the full IBF champion without making him fight for the belt. However, the IBF didn’t waste any time in ordering Uzcategui to defend against Plant. A purse bid will be ordered if Uzcategui’s promoters at Zanfer Promotions aren’t able to make a deal with Plant’s promoters at TGB Promotions.

DeGale recently recaptured the IBF title in beating Caleb Truax by a narrow 12 round decision. However, DeGale looked terrible in the fight, and it was believed by many that he would be beaten soundly once the IBF ordered him to defend against interim IBF champion Uzcategui. Rather than suffer what likely would have been a one-sided loss to Uzcategui, DeGale quickly vacated the IBF title as soon as the sanctioning body ordered him to defend against the Venezuelan fighter. DeGale says he wants to face other fighters.

Plant should have gotten a few more fights under his belt before he chose to challenge for the IBF title against Uzcategui. I don’t think Plant is near ready to meet up with a champion like Uzcateguie right now. Plant has been fighting on Premier Boxing champions against beatable opposition and now he’s getting a title shot without having to face a difficult opponent.