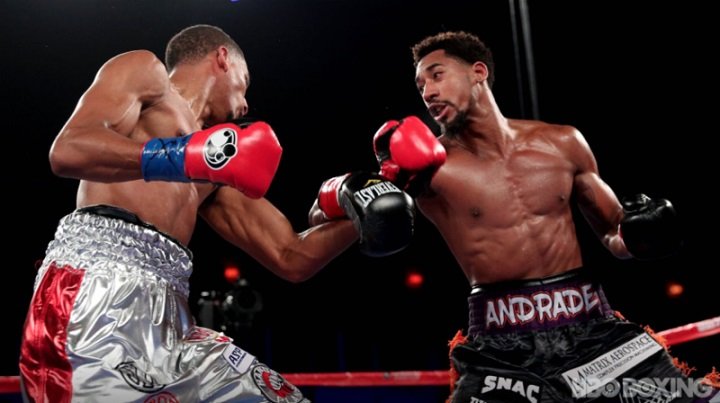 By Scott Gilfoid: The World Boxing Organization stated on Thursday that #2 WBO Demetrius Andrade will likely be the next mandatory challenger to WBO middleweight champion Billy Joe Saunders when the time comes.

This should be interesting to see whether Saunders vacates his WBO title to avoid the Andrade fight if the sanctioning body orders him to take the fight next. Saunders pulled out of his last fight against Martin Murray, so it’s likely that the WBO counted that as a fight. That means that Saunders is going to need to make a mandatory defense sooner than many boxing fans think. If Saunders doesn’t fancy the Andrade fight, you never know if he decides to vacate the belt to avoid a potential loss.

I don’t think Saunders will because that’s his only way of getting a potential fight against Saul Canelo Alvarez or Gennady Golovkin. Without the WBO middleweight title in his possession, he’s a non-factor in the division. There’s nothing about Saunders that would make Golovkin and Canelo want to fight him if he doesn’t still have the WBO title in his possession. He’s a runner.

The WBO didn’t state when they will get around to ordering Saunders (26-0, 12 KOs) to make his next mandatory defense of his title. Saunders is coming off of a 12 round unanimous decision over mandatory challenger David Lemieux last December. Saunders was supposed to make a voluntary defense against former four title world title challenger Martin Murray on June 23, but he suffered an injury and pulled out of the fight. As of now, Saunders doesn’t have a scheduled opponent. He has the option of taking a voluntary defense for his next fight, so he clearly won’t be facing Andrade anytime soon if ever.

Given that Saunders could be facing the winner of the September 15th fight between IBO/WBA/WBC middleweight champion Gennady ‘GGG’ Golovkin and Saul Canelo Alvarez, the likely responsibility to defend against Andrade could come down to one of those two fighters. Saunders isn’t going to beat talents like Canelo or GGG.

Former WBO 154 lb. champion Andrade would be a tough out for Saunders. 2008 U.S Olympian Andrade is a southpaw with good size, power and boxing skills. Andrade has the skills to beat Saunders. That’s not a short-armed, 5’9” Lemieux that the 5’11” Saunders would be dealing with in facing Andrade. This is a guy with the height, reach and power to give Saunders all kinds of problems. Andrade won’t be baffled by Saunders’ southpaw stance like some fighters because he’s a southpaw as well.


« George Groves vs. Callum Smith to take place in September