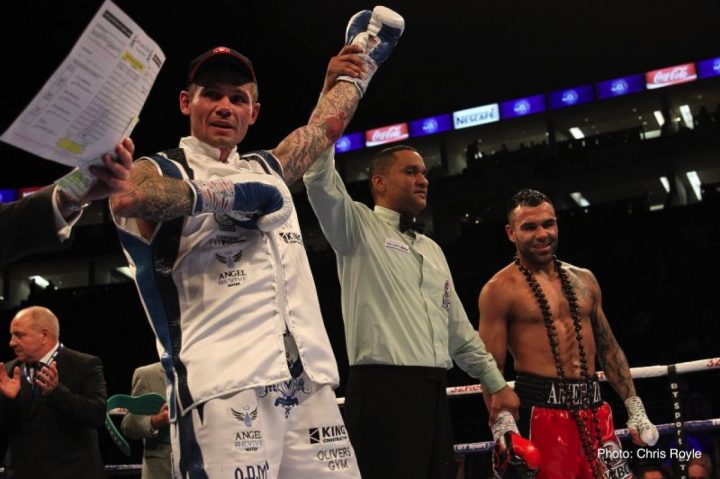 By Scott Gilfoid: After defeating WBC Silver middleweight champion Roberto Garcia (41-4, 24 KOs) by a 12 round unanimous decision last month on June 23, former four time world title challenger Martin Murray (37-4-1, 17 KOs) has been moved up to No.2 in the World Boxing Council’s new rankings at 160.

It’s scary to think that Murray could soon be rated No.1 by the WBC, because he’s looked incredibly pedestrian in his 10 fights. The way Murray fought against Roberto Garcia last month, I don’t see how he could be rated in the top 15 at all. He looked so bad in that fight.

Murray, 35, is now in the position to challenge WBC middleweight champion Gennady ‘GGG’ Golovkin in a rematch. Murray was knocked out by Golovkin in the 11th round three years ago in 2015. Murray has lost two more fights since then in losing to Arthur Abraham and George Groves. However, Murray has won his last four fights since then in defeating Roberto Garcia, Arman Torosyan, Gabriel Rosado and Nuhu Lawal. It’s doubtful that Golovkin is going to give Murray a title shot in a voluntary defense of his WBC belt. Besides Golovkin being ridiculed if he were to take the fight with the aging, light-hitting Murray, he would be taking a fight that would likely make him very little money because it wouldn’t be one that would be shown on HBO PPV. Murray isn’t a star in the U.S or even in his own country.

In my own rankings, I have Murray ranked No.25. I’m sorry I don’t rate Murray as a top 15 contender. Murray should have lost to Gabriel Rosado last year in their fight in Liverpool, England. Murray was given a 12 round majority decision, but the boxing world saw Rosado at the winner of that fight. Boxing News 24 scored it for Rosado by a 7 rounds to 5 score. Rosado looked like the far better fighter on the night.

It will be interesting to see if the WBC orders a secondary title eliminator involving Murray and one of the top contenders. Jermall Charlo is the current WBC mandatory to GGG. There seems to be a log jam of top fighters with the WBC waiting their turns.

Canelo not worried about Golovkin’s power »