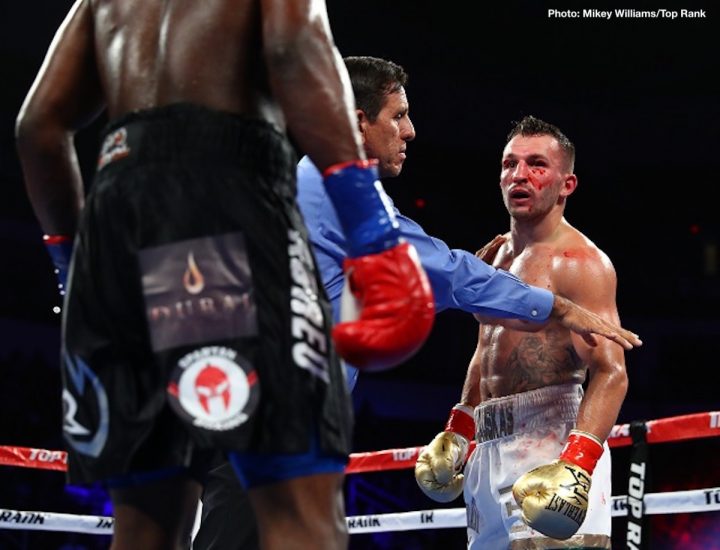 By Chris Williams: Unbeaten #2 WBO, #4 WBA and #5 WBC welterweight contender Egidijus Kavaliauskas (20-0, 16 KOs) labored to an unimpressive 10 round unanimous decision over and Juan Carlos Abreu (21-4, 19 KOs) on Saturday night on ESPN on the Top Rank Boxing promoted card at the Save Mart Arena in Fresno, California.

Kavaliauskas vs. Abreu was originally scheduled for the co-feature on the undercard of WBC light welterweight champion Jose Carlos Ramirez vs. Danny O’Connor. However, that fight imploded after one of O’Connor’s kidney’s reportedly shutdown due to dehydration when he was attempting to make weight last Friday. O’Connor ended up being hospitalized overnight.

Kavaliauskas was cut in the first round over his left eye from a clash of heads from the 31-year-old Abreu. Kavaliauskas was later cut again. Abreu proved to be a much tougher opponent than originally expected, as he had the better engine and looked by far the more athletic of the two. Abreu made the mistake of not being busy enough in the middle rounds. He let Kavaliauskas put a lot of rounds in the bank. So by the time that Abreu finally started putting more pressure on Kavaliauskas, he was too behind in the fight to win.

This was not an impressive performance from the Lithuanian Kavaliauskas. He looked slow, robotic, clumsy and very hittable. The performance showed that Kavaliauskas is not going to ever be any threat to the talented fighters like Keith Thurman, Errol Spence Jr., Danny Garcia, Shawn Porter and Terence Crawford. Top Rank is going to need to rethink what their end game is for Kavaliauskas because his performance tonight showed that he’s not talented enough to compete with the better fighters in the 147 lb. weight division. Abreu is a fighter that Kavaliauskas should have been able to defeat with ease, but unfortunately he lacked the talent to get the job done without the fight being close.

The victory for Kavaliauskas allows him to keep his NABF welterweight title, but he may need to be satisfied with this obscure title because he’s not going to win any of the major titles fighting the way he fought tonight.

Former heavyweight title challenger rated Andy Ruiz Jr (31-1, 20 KOs) defeated 38-year-old journeyman and former world title challenger Kevin “Kingpin” Johnson (32-10-1, 16 KOs) by a 10 round unanimous decision. The scores were 97-93, 97-93 and 99-91. Ruiz used his youth and hand speed advantage to control the fight and win a lopsided decision for the most part. The victory for Ruiz Jr. was his second consecutive win since losing to Joseph Parker by a 12 round majority decision in December 2016.