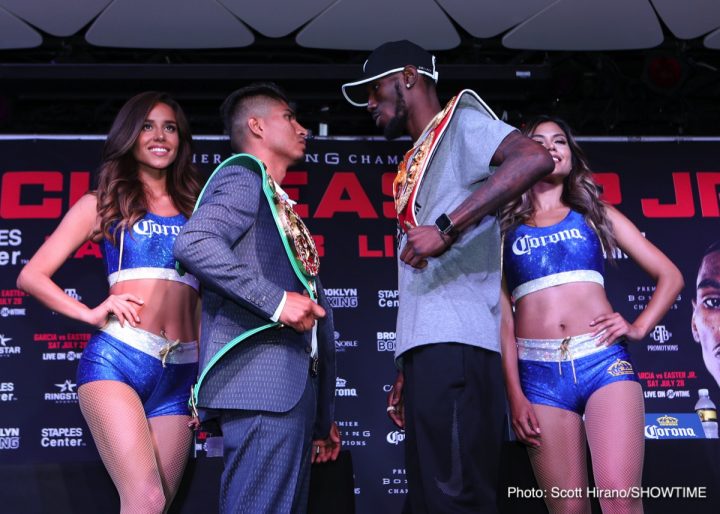 By Dan Ambrose: Robert Easter Jr. (21-0, 14 KOs) says it’s going to be easy for him to defeat the undefeated Mikey Garcia (38-0, 30 KOs) in their unification fight this Saturday night at the Staples Center in Los Angeles, California. Easter Jr. will have his IBF lightweight title on the line against WBC 135-pound champion Garcia in their fight on Showtime.

The 5’11” Easter Jr. believes that his huge height and reach advantage over the 5’6” will lead him to victory. Easter Jr. has always done well against shorter fighters that fight at a slow pace like Garcia does.

Easter Jr. can spoil Mikey’s plans for a fight against IBF welterweight champion Errol Spence Jr. if he an defeat him somehow on Saturday night. Mikey says he wants to fight Spence next. Whether he actually does is another question. Some boxing fans believe that Mikey is using Spence’s name to try and get the spotlight put on him so that people will pay attention to him. The lightweight division isn’t a popular one with the casual fans. They prefer watching fighters from the 147-pound weight classes and above instead of little fighters. The hardcore fans don’t mind following the smaller fighters, but not the casual fans. Mikey is going to need to move up to welterweight if he wants the bigger money, because there’s no one at lightweight besides Lomachenko for Garcia to fight. He’s not likely going to bother fighting the Top Rank promoted WBO lightweight champion Raymundo Beltran, and there’s no money in facing guys like Luke Campbell. Mikey needs to try his hand at welterweight if he wants to take his career to the next level.

”Me and Robert Easter Jr. are the only unbeaten champions in the division,” Mikey said. ”So in my eyes, the winner is the best fighter in the division.”

A lot of boxing fans would disagree with Mikey about the winner of his fight against Easter beating the best fighter in the lightweight division. Lomachenko is considered the best by most fans. The only way the winner of the Easter Jr. vs. Mikey fight can be viewed as the best in the division is by beating Lomachenko. Making that fight could prove to be difficult because Lomachenko is promoted by Garcia’s old promotional company Top Rank. It might very difficult for Mikey to negotiate the fight. It could prove impossible, especially if Lomachenko insists on getting the lion’s share of the money.

Garcia vs. Easter Jr. will be televised at 10:00 p.m. ET on Showtime Boxing. Garcia has captured world titles in four weight classes.

This is a fight that is difficult to make a prediction about because Mikey has never fought anyone with the height and reach of Easter Jr. during his career. Moreover, Garcia is coming off of a punishing 12 round fight against former IBF light welterweight champion Sergey Lipinets on March 10. Mikey took a bucketful of punishment from the heavy-handed Lipinets in that fight, and by the end of it, he looked very much like the loser rather than the winner of the fight. The unmarked Lipinets looked fresh in comparison to the bloody, bruised and badly swollen-faced Garcia. Lipinets, 5’7”, isn’t much taller than Garcia, but he ws able to give him problems with his punching power and pressure. It’s going to be different with the 5’11” Easter, who can punch and he’ll have a huge size advantage in the fight.

“I feel like this is going to be easy for me,” Easter said to espn.com. “I’m going to win this fight. I’m too tall and I’m too fast and I got power. When I apply those things, along with my game plan and being patient, I can’t be beat.”

Easter Jr. had better be thinking knockout against Garcia if he doesn’t want to wind up on the losing end of a controversial decision. Lipinets gave Garcia all kind of problems last March, and yet he found himself on the losing end of the wide scores of 116-111, 117-110 and 117-110. The scoring for the fight suggests that it may be very difficult if not impossible for Easter Jr. to beat the more popular Garcia by a decision.

Garcia is a top pound-for-pound fighter, but he hasn’t beaten anyone good enough since he returned from a 2 ½ year break from boxing for him to be considered a top five guy. Garcia’s wins in his last four fights have come against these fighters:

There’s nothing wrong with those fighters, but the fact remains that those are not the best talents in their respective division. At best, Lipinets is perhaps No.10 in the light welterweight division. Rojas is a journeyman. Broner is more of a fringe contender at 140 than a top five guys. Zlaticanin is bottom 15 at lightweight. Mikey hasn’t beaten the cream of the crop at lightweight and light welterweight. If he hadn, he’d likely already be the No.1 pound-for-pound fighter in boxing. But you can’t do that fighting Broner, Zlaticanin and Lipinets instead of Regis Prograis, Vasyl Lomachenko, Jorge Linares, Jose Ramirez and Joshua Taylor.

Mikey needs a victory over Easter Jr. to keep his career moving in the right path for the big money fights, which unfortunately for him have been elusive.

Former heavyweight world title challenger Luis “King Kong” Ortiz (28-1, 24 KOs) will be back in action looking to put his loss to WBC heavyweight champion Deontay ‘Bronze Bomber’ Wilder behind him in taking on 6’7” former world title challenger Razvan Cojanu (16-3, 9 KOs) in a 10 round affair. Ortiz, 38, needs a victory to get himself back in line for another world title fight. Ortiz was stopped in the 10th round by Wilder on March 3. Ortiz vs. Cojanu is the chief support for the Garcia vs. Easter Jr. fight. It’ll be interesting to see if the Cuban Ortiz can do a better job beating the 31-year-old Romanian Cojanu than former World Boxing Organization heavyweight champion Joseph Parker did in defeating him by a 12 round earlier this year on May 6. Cojanu gave Parker problems with his size and odd fighting style. Parker never did make an adjustment to the clowning that Cojanu did in the fight.

”A victory for m on Saturday night will put me back in line for the rematch with Deontay Wilder,” Ortiz said. ”I learned that I need to train even harder, fight harder, throw more and connect more. If I hadn’t fatigued (against Wilder), I’d still be punching him today. I threw the clock away at the gym. We’re going to be smarter going forward.”

Ortiz, 6’3”, gassed out after hurting Wilder in the 7th round. If Ortiz hadn’t emptied his tank trying to score a knockout, he probably would have stopped Wilder in the 8th round because he was there to be stopped. Wilder was still on shaky legs at the start of the 8th, but Ortiz was too exhausted to finish him off. It’s doubtful that Ortiz will get a rematch straightaway against Wilder if he beats the 6’7 ½” Cojanu on Saturday. There’s two contenders ahead of #4 WBC Ortiz in the World Boxing Council’s rankings in #1 WBC Dillian Whyte and #2 Dominic Breazeale. Wilder is expected to defend against Breazeale next, so that’ll remove him from the top five if he loses. Whyte figures to be the one that faces IBF/WBA/WBO champion Anthony Joshua if he wins his fight this weekend against Joseph Parker and if Wilder doesn’t agree to the $15 million flat fee offer for the Joshua fight.