Deontay Wilder to be ringside for Tyson Fury’s fight against Francesco Pianeta on Aug.18 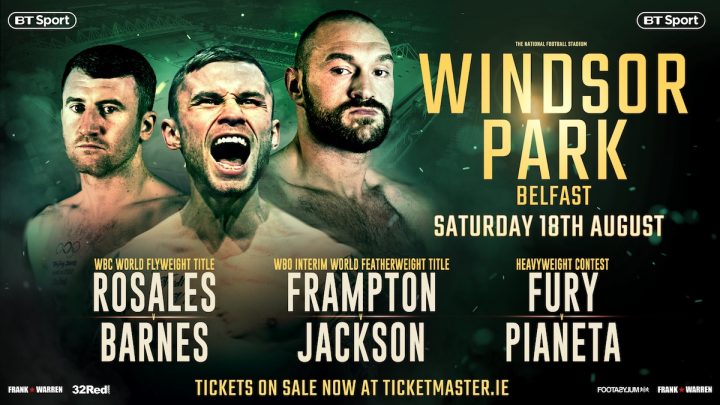 By Scott Gilfoid: Deontay Wilder will reportedly be at ringside for former heavyweight unified world champion Tyson Fury’s fight next month against Francesco Pianeta on August 18 at Windsor Park in Belfast, Northern Ireland. Wilder (40-0, 39 KOs) will be there live to help hype his fight against Fury (26-0, 19 KOs) for later this year in December.

On Monday, Fury, 29, revealed to the boxing world that he plans on challenging Wilder for his WBC title in December. Fury said the negotiations for that fight are close to being completed. Fury isn’t afraid of Wilder, and you have to respect that.

Wilder being at ringside for the Fury vs. Pianeta fight will likely take the spotlight away from the Carl Frampton vs. Luke Jackson super featherweight contest on the night on the same card at Windsor Park. Ever since Fury broke the news that he plans on fighting Wilder in his next fight, there’s been hardly a peep from boxing fans about Frampton’s fight against Jackson. Few fans are now taking notice of the Frampton-Jackson fight. If Wilder is able to enter the ring after Fury’s fight against Pianeta, Frampton and Jackson’s fight will likely be totally inconsequential.

The winner of the Fury vs. Wilder fight will have a good chance of facing IBF/WBA/WBO heavyweight champion Anthony Joshua on April 13 at Wembley Stadium in London, England. That’s, of course, if Joshua and his promoter Eddie Hearn of Matchroom Boxing are willing to give the winner of the Wilder-Fury fight an equal share of the money for the fight. Hearn won’t be able to satisfy the Fury vs. Wilder winner with the ridiculous $15 million flat fee offer that he’s currently offering Deontay for the Joshua fight on April 13. Hearn is going to need to get a clue and stop wasting his breath by flapping his gums endlessly about offering Wilder a $15 million flat fee, because obviously he’s never going to agree to that tiny offer in a million years. Hearn sounds like a broken record with the way he keeps going on about the $15 million flat fee offer. You would think that a sharp promoter would have realized straightaway that this offer wasn’t going to work in getting Wilder to sign, and they would have sweetened the offer until he did sign. That’s not happening with Hearn, and it’s troubling.

It’ll be interesting to see if Fury allows Wilder to enter the ring after the Pianeta fight. Anthony Joshua said recently that Wilder wouldn’t be allowed into the ring for his fight against Alexander Povetkin on September 22 unless he signed the contract first for a fight with him on April 13. Fury will likely allow Wilder into the ring, as he wants to help build their fight for December. Unlike Joshua, Fury obviously knows that for him to help build interest for a fight against Wilder, he’s going to need to let Deontay into the ring after the Pianeta fight. Joshua wants Wilder to sign the contract sent out by his promoter Eddie Hearn first before he allows him into the for the Povetkin fight. The problem is the contract that Wilder would need to sign is for a $15 million flat fee, and that’s not what he’s interested in. Hearn and Joshua aren’t offering Wilder a percentage deal, which is unheard of for a mega-fight. They want Wilder to agree to a flat fee. It’s all well and good if the Joshua-Wilder fight only brings in $30 million for April 13, but it’s expected to bring in loads more revenue than that. Some fans believe the fight can bring in as much as $100 million. So if Wilder agrees to a $15 million flat fee, Joshua would walk away with as much as $85 million. Joshua not allowing Wilder into the ring on September 22 will likely not work in his favor, as he’s not going to feel pressure to ink the $15 million flat fee contract for April 13. It’s a simple-minded approach to get Wilder to agree to sign for the fight. Wilder obviously won’t be bothered in the least at not being allowed to enter the ring for the Joshua-Povetkin fight on September 22, as it seems pretty obvious that Joshua doesn’t fancy the idea of facing Wilder on April 13. If he did, he would give him a percentage deal for April 13 rather than a flat fee. This all looks for show by Joshua and Hearn. Joshua might have missed his chance to fight Wilder, as Fury is grabbing that fight with both hands and showing a lot of courage in the process.

If Fury can beat Wilder to win the World Boxing Council heavyweight title, Joshua and Hearn would need to give Tyson a much bigger percentage cut for a Joshua-Fury fight than they would if Fury went into that fight as a simple challenger. Of course, you can expect Joshua and Hearn to offer Fury a tiny percentage of 75/25 anyway, but it likely won’t work. The argument that Hearn will have about Joshua having more titles than Fury likely will fall on deaf ears. Fury will stick to his guns of likely demanding a 50-50 deal for the Joshua fight.

Joshua and Hearn are said to have sent Wilder a signed contract for the April 13 fight, and all he needs to do is sign it. Hearn and Joshua say it’s the exact same deal that Wilder previously agreed to for September. However, Wilder is no longer agreeing to that same deal, as he now wants a 50 percent cut of the revenue. Unfortunately, Hearn and Joshua are saying they won’t increase the money offer to Wilder. In other words, Wilder either accepts the $15 million flat fee for the Joshua fight or no deal. Fury sees Joshua as being cowardly by not accepting the $50 million offer sent by Wilder’s team for him to come over to the U.S to face him. Fury sees Joshua as running scared of Wilder, and he hates the way it makes British fighters look. As such, Fury says he wants to show that he’s not scared of fighting Wilder, and he’s willing to face him in the U.S if need be. It’s unclear whether the Fury vs. Wilder fight will take place in the U.S, however. That would be a huge risk for Fury to come to the U.S to face Wilder in Las Vegas, New York or Alabama. Wilder fights well when he’s in Alabama. Fury might be asking for trouble if he challenges Wilder in his own hometown.

Fury is taking on the 6’5” two-time heavyweight world title challenger Pianeta (35-4-1, 21 Kos) to help him get ready for the 6’7” Wilder. It’s a good tune-up level opponent for Fury to sharpen up for the Wilder fight. Fury will need to look a lot better against the 33-year-old Pianeta than he did against his comeback opponent Sefer Seferi for him to be taken seriously as a threat to Wilder by the boxing public. Fury looked flat, slow and rusty in his 4th round knockout victory over the 5’9” Seferi last month on June 9 in Manchester, England. Seferi only threw punches in the 1st round. When Seferi was throwing shots, he was landing at will against Fury. It looked like Seferi exhausted himself after the 1st round and was unable to muster up the energy to keep his offense in gear from the 2nd round on. Seferi finally quit after round 4.