Regis Prograis vs. Terry Flanagan on October 27 in New Orleans 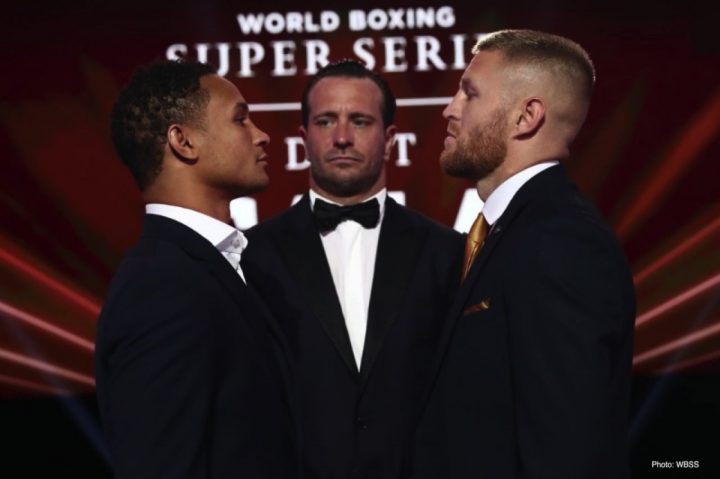 By Scott Gilfoid: Interim WBC light welterweight champion Regis Prograis (22-0, 19 KOs) and the recently beaten former WBO 135-pound champion Terry Flanagan (33-1, 13 KOs) are heading towards their quarterfinals date of October 27 in the World Boxing Super Series tournament at the Lakefront Arena in New Orleans, Louisiana. Prograis vs. Flanagan will be streamed on DAZN in the U.S.

If Flanagan can regain the form that he showed during his domination in the lightweight division, then perhaps he might have a chance of beating Prograis. Unfortunately for Flanagan, he’s no longer has a HUGE size advantage over his opposition now that he’s moved up to 140. You can argue that one of the reasons why Flanagan was so effective in the 135-pound division is because he was always much bigger than his opposition.

Being able to melt down to 135 allowed Flanagan to enjoy a tremendous size advantage over his smaller opposition in his fights. In other words, Flanagan would beat his smaller opponents on size alone rather than talent. The other reason why Flanagan was so effective at lightweight is because he never fought any of the talented fighters like Mikey Garcia, Vasyl Lomachenko, Jorge Linares, Luke Campbell, Yvan Mendy, Robert Easter Jr., Jose Pedraza, Javier Fortuna, Rances Barthelemy and Raymundo Beltran. Would Flanagan have beaten some of them? Yeah, he probably would have picked off two or three of those fighters, but I don’t think he would beat all of them. Mikey Garcia, Lomachenko, Campbell and Easter Jr. would have been huge headaches for Flanagan to deal with.

Without having proven himself fully at lightweight, Flanagan is moving up to 140 to face the best in the World Boxing Super Series tournament. Having already failed in his first fight at 140 against Maurice Hooker, Flanagan is heading into the WBSS tournament in bad shape. You never like to see a fighter going into a tournament like the WBSS tourney on the back of a loss.

The highly talented Prograis is the No.1 seed in the World Boxing Super Series 140lb tournament which includes fighters like Josh Taylor, Kiryl Relikh, Ivan Baranchyk, Eduard Troyanovsky, Anthony Yigit and Ryan Martin. Prograis is considered by the boxing world as the guy that will come out of the WBSS tournament with the Muhammad Ali Trophy in his possession. It’s unfortunate for Flanagan that he’s been hand-picked out by Prograis in the quarterfinals, as if Flanagan had an easier route, he might make it to the semifinals at least. As things are now, Flanagan is likely to be sent packing after his first fight in the WBSS 140-pound tournament when he meets up with the knockout artist Prograis.

This is the first round of the WBSS 140-pound tournament. The 29-year-old Flanagan will need to leave the save confines of the UK for the first time in his nine-year career to go out on the road to face Prograis in his old hometown of New Orleans. It’s asking a lot of the 5’9” Flanagan to battle Prograis on his home turf, as he’s always had the crowd on his side in his fights. On October 27, Flanagan won’t have the cheering and adoration of the crowd there at ringside to root him on the victory. The back slappers won’t be there for Flanagan to give him courage and the self-confidence to lead him to victory on the night. As such, if Flanagan doesn’t come back than he did in his loss to Maurice Hooker last month on June 9 in a failed attempt to win the vacant WBO light welterweight strap, then he’s going to be tasting defeat once again.

The 29-year-old southpaw Prograis is coming off of an 8th round stoppage victory over Jose Velasco earlier this month on July 14 in New Orleans. Prograis seemed to let the Velasco hang around by not going after him in a way that would have allowed him to finish the fight quickly. The biggest hint that one saw that Prograis was carrying the hopelessly over-matched Velasco is the fact that he was throwing mostly body shots instead of targeting his head. Prograis was throwing almost exclusively body shots in what looked like a body shot clinic. Prograis appeared to be practicing by throwing with maximum power to Velasco’s body to see how long it would take before the Argentinian wilted from the shots. To Velasco’s credit, he took the punishment to the body reasonably well for the first five rounds. However, by the 6th round, Velasco appeared to want to quit, but his corner opted not to stop the massacre. The fight was allowed to continue to the 8th before the bout was finally halted. Due to Prograis’ vicious body shots, Velasco’s punches lost much of the pop on them by the fourth round. Velasco’s shots had nothing on them by round 4, and Prograis didn’t seem to care that he was getting hit. All he cared about was hitting Velasco as hard as he could to the body to force him to quit, which ultimately is what happened in the 8th.

Flanagan will likely be little more than a minor distraction for Prograis on his path to winning the World Boxing Super Series tournament. The fight the fans want to see is Prograis vs. Josh Taylor. If the two fighters win their quarterfinals and semifinals matches, they’ll be meeting up in the WBSS finals. However, Taylor might not be around for the final, as he has a very tough match in the quarterfinals against unbeaten 25-year-old Ryan Martin (22-0, 12 KOs), who is bigger, taller, stronger and faster than him. Taylor has never faced anyone with the raw talent, youth and size that Martin possesses. The way that Taylor struggled to beat the past his prime 34-year-old Victor Postol by a 12 round unanimous decision last month on June 23 indicates that he may lost to Martin. Taylor barely beat Postol. I mean, the lopsided scores by the three judges that worked the fight gave the appearance that Taylor had completely thrashed Postol, but the reality is he won that fight by the narrowest of margins by two rounds at best. If Postol hadn’t been knocked down in the 10th, the fight would have been a draw on Boxing News 24’s scorecard. Taylor looked awful against an old, past his best Postol. The thing is, Taylor is now facing a guy that has even more raw skills than Postol in Ryan Martin. He does everything Postol does, but much better due to his added hand speed, power and youth. Martin has the talent to take the judges out of play when he meets up with Taylor in a fight that will likely take place in Taylor’s hometown of Glasgow, Scotland.

Deontay Wilder to be ringside for Tyson Fury’s fight against Francesco Pianeta on Aug.18 »