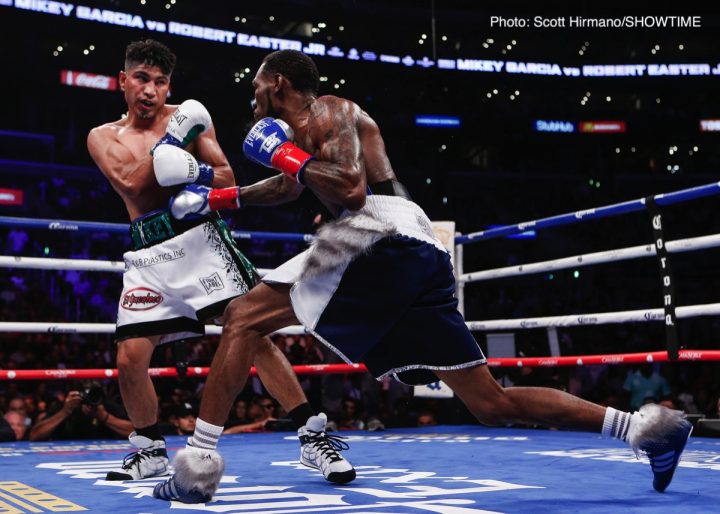 By Dan Ambrose: Danny Garcia says IBF/WBC lightweight world champion Mikey Garcia won’t be moving up to welterweight to challenge IBF champion Errol Spence Jr. Danny (34-1, 20 KOs) thinks that Mikey is just talking about the Spence fight in order to get attention on himself.

Danny sees what Mikey is doing as similar to how Floyd Mayweather Jr. used to talk about fights against different popular fighters without him ever facing them. Mikey is just name dropping Spence’s name to get some badly needed attention on his career, in other words.

“He ain’t going up to 147! He ain’t really going. He just wants to make some noise, like he pulling a Floyd Mayweather card,” Danny Garcia said to Fighthub.

Danny’s thoughts about Mikey are similar to what a lot of fans are saying. They see Mikey as having no intention of walking the plank o face Spence in 2018 or anyime in the future, because it would be such a mismatch. Mikey looked barely better than former IBF light welterweight champion Sergey Lipinets last March in beating him by a 12 round unanimous decision, and he looked equally as mediocre in defeating IBF lightweight champion Robert Easter Jr. last Saturday night by a 12 round unanimous decision at the Staples Center in Los Angeles, California.

The short 5’6” Mikey was eating Easter’s jabs for dinner all night long, and only looking to land an occasional big shot. The only reason Mikey won the fight is because he was facing a fighter with average power at lightweight. If this was Spence inside the ring, Mikey would have been in a world of hurt. If it had been Danny Garcia, Shawn Porter, Terence Crawford or Manny Pacquiao, Mikey would have been in bad shape as well.

Mikey is a good fighter, but he’s NOT a welterweight and he never will be. He has the slender physique of a featherweight, who has eaten his way to lightweight. Looking at the visible fat that has collected around Mikey’s midsection, it’s clear that he’s little more than an overweight featherweight fighting at lightweight. Mikey can eat his way to welterweight if he loads up with carbs, but he’s just going to be fat and end up totally over-matched by Spence.

“It’s a difference, for sure! Yeah, it’s a difference for sure,” Danny Garcia said about the difference going from 140 to 147. “I mean, he [Mikey] got the technique, we just don’t know how physically strong he would be at that weight. That’s all it is.”

Well, we already saw that Mikey lacks power at 140 when he was unable to hurt Adrien Broner and Lipinets in bouncing his best shots off their chins for 12 rounds in winning decisions against them. Mikey did drop Lipinets in round 7 with a left hook to the head, but he was unable to badly hurt him. Lipinets go back up and continued to take the fight to the weaker Mikey. Lipinets looked like the better fighter in the 7

th and in many of the other rounds. Lipinets is not a big puncher, but he was still the much better puncher than Mikey last March. It would be nice if Mikey would have stayed at light welterweight to take on the better fighters in the division like Regis Prograis, Josh Taylor, Jose Ramiez, Maurice Hooker, Alex Saucedo and Kiryl Relikh. The way that Mikey bailed out of the light welterweigh division in vacating his International Boxing Federation title, it gave the impression that he didn’t have the desire to continue to soak up punishment.

Mikey’s fight against Lipinets was a really punishing one for him. If you look at Mikey’s bloody and lumped up face after the fight against Lipinets, he looked similar to how Roman ‘Chocolaitito’ Gonzalez appeared after his fight against Carlos Cuadras in 2016. Chocolatitos face looked like nine miles of bad road. Mikey’s face looked the same, and that was against a light welterweight with average power in Lipinets. Just imagine what Prograis would do to Mikey if he got him inside the ring. If Mikey goes straight up to welterweight to fight Spence later this year like he’s been talking, he’ll likely be taken out quickly by him. The fight will only last as long as Mikey can run from Spence, because once he’s tracked down, he’ll be chopped up and finished off.

“Yeah, he will. I mean if you pound-for-pound. A lot of boxing fans probably won’t give him credit but I’ll give him credit,” Danny said when asked if Spence will be given credit if he beats Mikey. “It’s a weird match-up…I’d rather see Mikey and Crawford, which makes more sense. That makes more sense to me. Because Crawford’s a naturally smaller guy, 140, like me.”

I have to disagree with Danny about Spence receiving credit if he beats Mikey. I don’t think he will. The boxing public will label Spence a ‘weight bully’ if he destroys Mikey in November or December, and say that he only won because he was bigger, stronger and more experienced in the 147-pound weight class. The fans will wonder why Spence isn’t fighting WBO welterweight champion Terence Crawford, WBA belt holder Keith ‘One Time’ Thurman or the winner of the Danny Garcia vs. Shawn Porter. Beating the tiny 5’6” Mikey Garcia won’t even be a fair fight for Spence. Mikey never even showed that he’s the best fighter in his own weight class at lightweight and he definitely didn’t prove anything at light welterweight. The only thing Mikey showed at 140 is he can beat two badly flawed fighters [Broner and Lipinets] that he carefully picked out.

If Mikey wanted to prove something at 140, he wouldn’t have quickly vacated his IBF title after the sanctioning body ordered him to defend it against the heavy-handed mandatory challenger Ivan Baranchyk. Mikey would have taken that fight, and showed that he could beat Baranchyk. That would have been a very hard fight for Mikey. Even if he beat Baranchyk, he would have been badly lumped up. Prograis would likely be a step too far for Mikey if he had been willing to stay at 140 long enough to test himself against him, which he obviously wasn’ interested in doing. Mikey chose to go the weak route in moving back down to face Easter Jr. in a low profile unification fight. If Mikey had stayed at 140, he would have received a lot more attention if he fought Prograis, but then again, he likely would be knocked out by him. Mikey seems to know his own limitations as a fighter. He gave up his IBF 140-pound title and went back down to 135 to take a lesser fight against Easter Jr. and he didn’t look good winning it.

Danny Garcia, 30, has his own problems he has to deal with in facing former IBF 147-pound champion Showtime Shawn Porter (28-2-1, 17 KOs) on September 8 for the vacant World Boxing Council welterweight title at the Barclays Center in Brooklyn, New York. Garcia is going to have his hands full against Porter. If Garcia’s last fight against Brandon Rios is any indication of how he’ll perform, he has a good chance of getting stopped by Porter. Garcia clearly doesn’t belong at 147, as he’s not the same fighter he once was when he held the WBC 140-pound title.