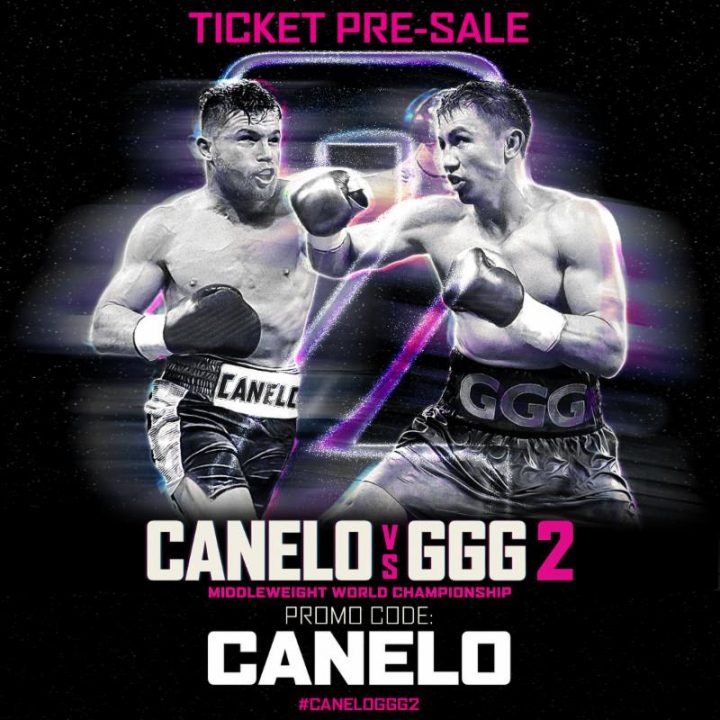 By Dan Ambrose: Gennady ‘GGG’ Golovkin will be back at the T-Mobile Arena in Las Vegas, Nevada on September 15 to defend his middleweight titles against Saul Canelo Alvarez in a rematch on HBO PPV. The start time for the GGG-Canelo 2 rematch is at 8pm ET/5pm PT.

Golden Boy Promotions CEO Oscar De a Hoya is convinced that the 27-year-old Canelo will have his hand raised at the end of the fight. Of course, De La Hoya also thinks that Canelo deserved a victory in their previous fight. That’s not what the unbiased fans believed in looking at the same fight. Golovkin and Canelo dislike each other after the controversy from the previous fight and Canelo’s two failed tests for clenbuterol.

”Canelo will without a doubt want to shut Golovkin up, and the only way to do it is by knocking him out on September 15,” De La Hoya said.

Canelo is going to need to put together more than a short burst of punches for him to knockout Golovkin, because he’s not going to get the job done if he needs to take rest breaks after throwing three punches. Canelo’s stamina from the last fight was terrible. He was always tired in the fight after throwing punches, and GGG was able to take advantage of that by getting the better of him in the last 10 rounds.

For a potential third fight between Canelo and GGG to take place, the second fight has to be free of controversy. The fight has to be seen as being on the up and up with the eyes of the boxing fans.

Golovkin looks to make his 21st consecutive title defense of his middleweight crown. Pound-for-pound number 1 GGG is perceived as the best middleweight of this era, and he can prove that on September 15 by beating Canelo. Some boxing fans believe Golovkin has already beaten Canelo.

Canelo’s promoters at Golden Boy Promotions were able to negotiate the rematch to get the fight staged at the T-Mobile Arena once again, as that was the location for the previous Canelo-GGG fight last September. The fight was scored as a controversial 12 round draw, with most boxing fans feeling that Golovkin was robbed by the judges. He appeared to do enough to win by 9 rounds to 3. Canelo did little after round 2, as he exhausted himself and was unwilling to stand and fight for the last 10 rounds.

Canelo wanted to fight, but lacked the stamina to do so for more than a handful of seconds. It’s unfortunate that the second Canelo-Golovkin fight has to take place at the same venue as the first fight, given the huge controversy surrounding the strange scores turned in by two of the judges. Golovkin’s promoter Tom Loeffler should have tried harder to get the fight staged outside of Las Vegas. Golovkin did a good job of getting a 55-45 split with Canelo. Had the rematch take place with the previously agreed on 65-35 split, it would have been unfair to GGG. He only received a 30 percent split in the previous fight last year.

IBO/WBA/WBC middleweight champion Golovkin (38-0-1, 34 KOs) says he doesn’t care if Canelo is able to use his A-side position to enter the ring last before the fight. All Golovkin cares about is being the one that has his hand raised at the end of the contest, and then exits the ring last. Golovkin has decided that he’s not going to allow Canelo to see the final bell in the rematch because he does not want the three judges to decide his fate like the last time he fought Alvarez. Golovkin out-boxed Canelo for 12 rounds, and he assumed the judges would do their jobs correctly by giving him the decision. But unfortunately the judges scored I a 12 round draw. The scoring by the judges were ridiculed worldwide, leaving Canelo

in bad shape in the eyes of the boxing public. This time the judges are going to be under a microscope, according to GGG’s promoter Tom Loeffler. The scores the judges turn in will be closely monitored by the boxing ans, so it’s important that they do a better job this time if the fight goes to the scorecards.

”Canelo can be introduced last. The important thing is who leaves the ring last, and that will be me, as world champion, the people’s champion. See you at the Big Drama Show,” Golovkin said.

It’s believed there will be more fan interest in the second Canelo vs. GGG fight due to the controversy of the first, but that still remains to be seen. A lot of boxing fans have already said on social media that they won’t be purchasing the fight because they believe that GGG won’t be given a fair shake with the judging, and they feel that Canelo is a drug cheat due to him testing positive twice for clenbuterol last February. If the fight does do better numbers than the 1.3 million buys it generated o HBO PPV last year, it’ll be a pleasant surprise.

It’s not a good thing that Canelo tested positive for a performance enhancing substance (PED). That alone could hurt the PPV numbers in the rematch. The controversial draw that the judges turned in last time may hurt the buy rate for the rematch more than anything. Canelo has been involved in controversial decisions that have worked in his favor in the past against Austin Trout and Erislandy Lara. If boxing fans believe that Golovkin has to knockout Canelo 100 percent to get the victory, it can’t be a good thing when it comes to the PPV buys the rematch will generate. The fans need to believe that the judges will be fair for them to want to lay down their hard-earned money to pay to see the rematch.

”He won the first fight against Canelo in the eyes of millions of viewers who tuned in last September and he will do it again on Mexican Independence Day, with his record-breaking 21st consecutive title defense. It’s his destiny,” Loeffler said.