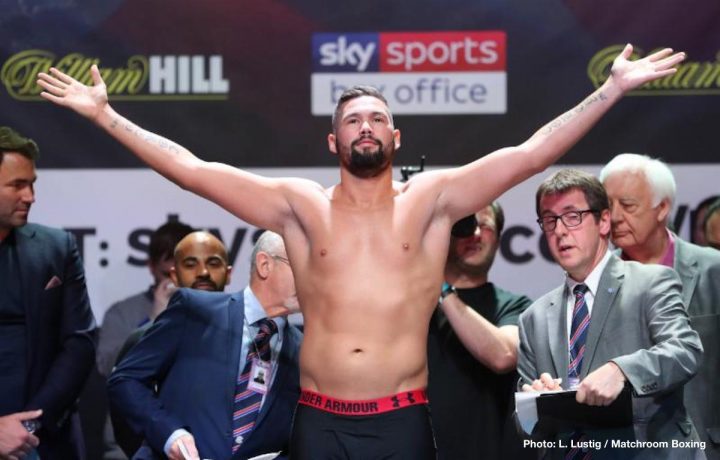 By Scott Gilfoid: Tony Bellew is eying a fight against former heavyweight champion Tyson Fury towards the end of the year at the 80,000 seat Principality Stadium in Cardiff, Wales. This is the same stadium that Anthony Joshua has fought his last two fights at.

Bellew, 34, figures that the Principal Stadium will be the perfect venue for him and Fury (25-0, 18 KOs) to stage a fight between them in the UK. Up until yesterday, it was thought to be a hopeless pipe dream on Bellew’s part of getting the 6’9” Fury to agree to a fight against him, as he’d rejected the idea of fighting the 210lb former WBC cruiserweight belt holder because he didn’t want to hurt him. Fury changed his tune this week, saying on Instagram, ”Trust me, you can get it if you want it, mate. Manchester’s finest vs. Liverpool’s worst. I’ll punch your face in for you.”

This bit of news has gotten Bellew’s hopes up to the point where he now believes there’s a real chance for him to land the fight.

Bellew thinks it’s a joke that Fury is fighting a cruiserweight in his comeback fight in taking on Sefer Seferi, but then again so do a lot of boxing fans. This fight isn’t being taken seriously. It’s a tune-up, and that’s all it is. Fury is being given a free pass from the fans because he hasn’t fought in close to three years. If Fury continues to fight fodder for well over a year, then there will be a problem, because it’ll be clear at that point that he’s looking to pad his record until he gets the payday fight against Anthony Joshua. That’s the match that Fury craves. He wants/needs the Joshua to prove himself as being the best heavyweight in the division.

For the average boxing fans, Fury vs. Bellew is good mindless entertainment to be consumed and forgotten 24 hours later. It would be like watching a sitcom filled with bad jokes that would consume 30 minutes of one’s time. I liken Fury-Bellew as like eating bad junk food, and feeling terrible afterwards. It’s not a fight that will leave a favorable memory that will stick in anyone’s mind forever. I see that fight as a spectacle, and of course a total money grab on the part of the two fighters. Bellew vs. Fury will sell in the UK, as they’re both well-known fighters, who will do a good job of hyping the fight, but it’ll likely be a disappointing affair from start to finish unfortunately. Bellew is too short, too light and too limited to have any chance of beating Fury unless he blows out an Achilles, like David Haye did against ‘The Bomber’ in their first fight in March of 2017.

“The Principality Stadium would be nice because we know it’s got a roof and I am sure we can get 70-80,000 in there that want to see me put Fury on his back,” Bellew said to skysports.com. Bellew says it can happen ”towards the end of the year.”

Well, Fury has a mismatch scheduled against 39-year-old cruiserweight Sefer Seferi (23-1. 21 KOs) on June 9 at the Manchester Arena in Manchester, England. This is Fury’s first fight in 2 ½ years since his big upset win over former IBF/IBO/WBA/WBO heavyweight champion Wladimir ‘Steelhammer’ Klitschko on November 28, 2015. Fury never was able to defend any of those titles, as he was injured, then tested positive for a banned substance and dealt with mental issues that kept him out of the ring until now. Wladimir wanted a rematch, but Fury wasn’t able to come back in time to face the Ukrainian before he retired after losing to Anthony Joshua by an 11th round knockout on April 29, 2017 in London, England. If wins his fight against Seferi, he could choose to sign for a fight against Bellew. However, Fury will likely take another tune-up bout before facing Bellew, because he still needs to sharpen up due to all the time that he’s been out of the ring.

Bellew is coming off of a 5th round knockout win over former 2-division world champion David Haye on May 5 at the O2 Arena in London, UK. The fight will televised on Sky Box Office PPV, and made both fighters a lot of money, even though it wasn’t a match between two relevant heavyweights. It was more of a celebrity match than a fight between two highly ranked contenders. Oddly enough, Bellew’s win over Haye has earned him a #5 ranking with the World Boxing Council, who has him ranked above solid heavyweights like former WBO heavyweight champion Joseph Parker (#6 WBC), Adam Kownacki (#8 WBC), Carlos Takam (#12 WBC) and Andy Ruiz Jr. (#15 WBC). While I think Bellew is a decent midlevel cruiserweight contender, I do not rate him as a top 15 heavyweight, let alone a No.5 ranked heavyweight. I think the WBC is way off in the stratosphere with that ranking for Bellew. I’d like to see how Bellew would do against Ruiz Jr., Takam, Kownacki and Parker. As much as trouble Parker and Takam gave Joshua, I don’t see Bellew as being deserving to be ranked above them, but of course, I’m seeing things in a logical manner, and perhaps the WBC are using other criteria, like celebrity popularity, as the criteria for what they’re basing their decision to rank Bellew over talents like Parker, Ruiz Jr., Takam and Kownaki. I mean, I’d hate to picture what would happen to Bellew if he got inside the ring with any of those fighters. Those guys can punch, and they don’t have Achilles that aren’t are going to blow out on them, and they’re not known for being vulnerable to the left hooks that Bellew likes to throw.

Bellew (30-2-1, 20 KOs) says if he can’t get a fight against Fury, he wants to try and fight Andre ‘SOG’ Ward (32-0, 16 KOs) or the winner of the World Boxing Super Series cruiserweight tournament between WBC/WBO champion Oleksandr Usyk (14-0, 11 KOs) and IBF/WBA champ Murat ‘Iron’ Gassiev (26-0, 19 KOs). As far as the Usyk-Gassiev winner goes, I’m not sure that Bellew rates a fight against the winner of that fight. Bellew has fought only once in the last year, and that was against the over-the-hill Haye. Bellew’s last two fights have come against Haye. Before that, Bellew beat fringe contender BJ Flores by a 3rd round knockout in October 2016, and before that, he beat Illunga Makabu by a 3rd round knockout in May 2016. You can argue that Bellew’s last fight against a true world class fighter in their prime was in his match against Makabu, who despite being ranked #1 by the WBC at the time, was basically little more than a fringe contender in terms of talent. Flores and Haye didn’t deserve to be rated in the top 15 in their respective divisions at the time they fought Bellew, because never of them had done anything with their careers in recent years. Going into his first fight with Bellew,

Oh boy, Bellew sees himself in the same class as those fighters. How sad. I hate to break this to Bellew. He’s not in the same class as Ward, Gassiev or Usyk. To lump his name up there with all of those talents, it’s presumptuous on his part. As far as cruiserweights go, Bellew needs to prove himself worthy of sharing the same ring with Gassiev and Usyk. For Bellew to show that he deserves to be in their presence, he should fight Mairis Briedis, the guy that he arguably ducked in 2016 and 2017. If Bellew can beat Briedis, then he should be considered as an option to face Gassiev and Usyk. Bellew likely won’t have to do that though, as the WBC gave him the ‘Emeritus champion’ tag when they stripped him of his WBC cruiserweight title in March 2017, which means he can go to the front of the line with the WBC to face the winner of the Gassiev vs. Usyk fight this summer. Currently, Mairis Briedis is rated No.1 with the WBC. Using his Emeritus status, Bellew could hop in front of Briedis to get a crack at the winner of the Usyk-Gassiev fight without having to earn the fight the way that normal fighters do. It would be off-putting if Bellew is allowed to do that, but that’s boxing for you. I’m not sure I understand this whole ‘Emeritus champion’ thing with the WBC. It seems to me to be like an honorary thing they bestow on champions with large fan bases rather than one guys that have proven themselves capable of ruling the division. During his short period as the WBC cruiserweight champion, Bellew didn’t clean out the WBC’s top 15. He never fought Briedis, Usyk, Gassiev, Yunier Dorticos, Krzystof Gowacki or Dmitry Kudryashov.