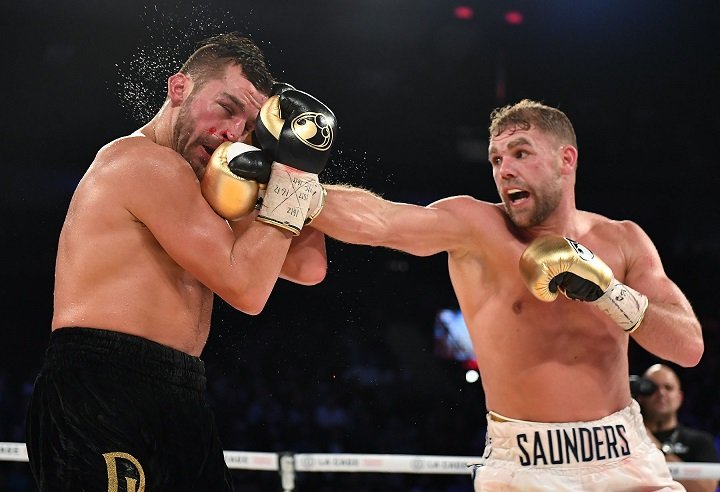 By Jeff Aranow: Billy Joe Saunders doubts that Golden Boy Promotions is serious about wanting to negotiate a deal for him to fight Saul Canelo Alvarez on September 15. Golden Boy has recently said that reached out to talk to Saunders’ promoter to put together a deal. However, Saunders doesn’t seem to believe the fight is going to happen, and he says Canelo should keep using his performance enhancing drugs.

Canelo twice tested positive for the banned substance clenbuterol last February. Although Canelo blamed the positive tests on having eaten contaminated meat in Mexico, he was suspended for six months by the Nevada State Athletic Commission.

”All talk @GoldenBoyBoxing let ginger balls stick to taking Ped’s 💦 goose will get beat 👑👌” Saunders said on his Twitter on Wednesday.

It’s difficult to know for sure whether Eric Gomez and Oscar De L Hoya of Golden Boy are truly interested in signing Saunders to fight Canelo. They’ve mentioned wanting to potentially match Canelo against five different fighters for his September 15 fight, and Saunders’ name is just one of them. His fighting style, which involves a lot of defensive moves, could prove to be negative for Golden Boy. They like to match Canelo against guys that are there to be hit by him, as he had problems when he fought defensive fighters in the past when he fought Erislandy Lara and Floyd Mayweather Jr. Both guys clearly beat Canelo, but he was given a controversial 12 round split decision win over Lara in 2014. Canelo clearly lost, but he had his hand raised at the end.

It’s probable that the true reason why Golden Boy is mentioning Saunders’ name is to get Gennady Golovkin to agree to the 65/35 purse split that they want for him to sign for the Canelo fight in September. If Golovkin agrees to that purse, Canelo will get the lion’s share of the money, again, and that’ll probably close the chapter in the two of them fighting. Canelo had a huge 70-30 purse split for the first fight against Golovkin. For Saunders to have a chance to fight Canelo, he’s likely going to need to agree to less than the 70-30 purse split that Golovkin received. My guess is Saunders would have to agree to a 75/25 purse split to get the fight with the red-headed star, even though he’s the World Boxing Organization middleweight champion and Canelo merely the challenger. I don’t see Golden Boy going lower than offering Saunders a 25 percent purse, because they would realize that they won’t get the fight if they try and sign him to an 80-20 deal.

Now that Golovkin has priced himself out by asking for a 50-50 purse split, these are the candidates in the running for Canelo’s September 15 fight:

O’Sullivan and Lemieux are believed to be the two candidates Golden Boy is seriously interested in for Canelo’s September fight. One of those two will likely be Canelo’s next opponent unless Golovkin changes his mind and agrees to the 65/35 deal that Golden Boy wants for him.

Saunders might have spoiled what little chance he ever had of getting the Canelo fight with his past performance against David Lemieux. Saunders boxed a master-class in schooling the former IBF middleweight champion Lemieux in winning a wide 12 round unanimous decision last December in Canada. The 28-year-old Saunders won by the scores 117-111, 118-110 and 120-108. The 120-108 score seemed to reflect what took place during the fight.

Saunders will be making a voluntary defense on June 23 against former four division world champion Martin Murray at the O2 Arena in London, England. Murray is an aging 35-year-old fighter, who has come up short when fighting for world titles in the past against Golovkin, Arthur Abraham, Sergio Martinez and Felix Sturm.