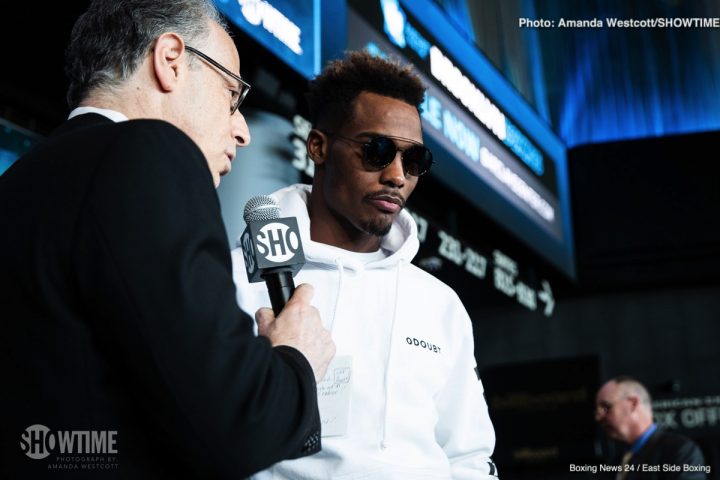 By Sean Jones: WBC president Mauricio Sulaiman let Gennady Golovkin know on Tuesday that if he doesn’t agree to fight Saul Canelo Alvarez in a rematch than the World Boxing Council will order him to take on interim WBC 160lb champion Jermall Charlo (27-0, 21 KOs).

To be sure, Golovkin wants the rematch with Canelo Alvarez (49-1-2, 34 KOs) on September 15. GGG doesn’t want the rematch if it means he has to take the smaller purse like he did last time when he agreed to a 70-30 purse split for the Canelo fight on September 16, 2017.

Sulaiman is shocked about the news of the Canelo-GGG II negotiations breaking down over the purse split, because he thought that the fight was close to an agreement at a 65/35 split favoring Alvarez. Nonetheless, Sulaiman wants GGG to know that if he doesn’t take the fight with Canelo, he’s going to need to fight his WBC mandatory Charlo.

”If the fight is not done, he will have to go with (Jermall) Charlo,” Sulaiman said to ESPN Deportes about Golovkin.

Judging by Sulaiman’s statement, he sounds like he’s not sure whether GGG can beat Charlo. This could be a very easy fight for Golovkin. But even if it’s not, he’s not going to temporarily duck it by agreeing to the 65/35 split for the Canelo rematch. Sulaiman is going to order Golovkin to face Canelo soon anyway, so it’s not like Charlo is going to disappear forever if the Canelo-GGG II fight gets made for September 15.

Golovkin might be able to buy some time if he’s able to get a unification fight against WBO champion Billy Joe Saunders for September, but I doubt that fight will happen, given that GGG’s IBF mandatory is due against Sergey Derevyanchenko on August 3. Golovkin will need to get that fight out of the way before he can start thinking of unifying against Saunders. If Golden Boy does make the fight between Canelo and Saunders for September, then they’ll have their best chance of weaseling a better deal for Alvarez against GGG by using the WBO title as a negotiating tool.

In theory, Oscar De La Hoya of Golden Boy can tell Golovkin and his promoter Tom Loeffler, ‘See the WBO title Canelo has. If you want it, you’ll have to agree to a 65/35 split. If you don’t, we’ll sit on the title for years until you do agree.’ That would be the worst thing that could happen to Golovkin, because he would then need to make up his mind how badly he wants the WBO belt. If he wants it enough, he’ll agree to take the 65/35 purse split that Golden Boy wants him to agree to for the Canelo rematch. If Golovkin doesn’t care any longer, then Canelo will be stuck with the WBO title, which would be a heavy around his neck, putting him in the hot seat where he’ll occasionally be forced to defend against tough but beatable contenders like Demetrius Andrade, Daniel Jacobs and Maciej Sulecki.

Sulaiman isn’t saying how long he’ll wait before he orders the Golovkin vs. Charlo fight. If it takes place immediately, then it could force Golovkin to make a decision about which belt – IBF or WBC – that he wants to keep. If the Canelo-GGG II rematch doesn’t get done for September 15, then Golovkin will need to defend against his IBF mandatory Sergey Derevyanchenko by August 3. Golovkin is likely going to be stripped of his IBF 160 lb. title by the International Boxing Federation even if the rematch against Canelo does take place in September. Golovkin’s promoter Tom Loeffler asked the IBF for an exception to give GGG time to face Canelo first on September 15, but the sanctioning body hasn’t made their decision yet.

I don’t think Sulaiman’s tactic of holding Jermall Charlo over the head of Golovkin is going to get him to agree to the smaller purse split that Golden Boy wants him to. Golovkin would lose so much money by caving in to accept the 65/35 split that Golden Boy is insisting that he take for the Canelo fight. If Golovkin sticks to his guns in wanting not less than a 50-50 deal, he’ll almost double the money that he made last time against Canelo. So instead of Alvarez hogging most of the money in the rematch, Golovkin would a good payday as well. Canelo took the smaller purse for his fight against Miguel Cotto in 2015. Golovkin isn’t asking for a bigger purse. He just wants things to be equal and fair.

“Gennady wants a fairer division due to the cancellation of the fight on May 5 and the success of the first show (last September),” Golovkin’s promoter Tom Loeffler said to ESPN.com.

Golovkin’s promoter Tom Loeffler was able to negotiate a small increase in his purse split at 65-35 for the May 5 rematch, but Canelo blew the fight out of the water when he tested positive twice for clenbuterol and then pulled out before he was suspended by the Nevada State Athletic Commission for 6 months. Due to Canelo pulling out of the May 5 rematch, Golovkin now wants nothing less than a 50-50 deal. Golden Boy Promotions says they won’t agree to that. They want the same terms as the cancelled May 5th rematch (65-35), but things have changed since then.

Canelo is now suspended by the Commission, he’s viewed as a drug cheat by many boxing fans, and Golovkin wasted time in training for that fight.

Sulaiman would prefer that Golovkin (38-0-1, 34 KOs) sign for the Canelo rematch, but he can’t make him to it. By letting Golovkin know that he’ll need to make a mandatory defense against the 27-year-old Charlo, he’s giving him a nudge in the direction of facing the 5’8” Canelo, who is a lot smaller than the 6’0” Charlo, less powerful and much more popular in the boxing world. Sometimes talent doesn’t equate to popularity in boxing. That’s one of the odd things about the sport. In other sports like the NFL, if you prove yourself as one of the best, you become popular overnight. In boxing, it’s different. You have to either have a large fan base built in, as with Canelo’s Mexican fans in the U.S, or you’ve got to be super exciting.

“Golovkin has all our support because all the history is clear as it is, so we are recommending him to do what is best for him, because he wants the fight, wants to earn the money that will generate there, and wants visibility to the world that has wanted,” Sulaiman said. ”He has sacrificed so much for so many years to get to this point and now for something that is not so important is putting him at risk. It would be strange to me that the fight is not done,” Sulaiman added.

What Sulaiman doesn’t understand is the Canelo rematch will still be there for Golovkin if he doesn’t take the fight in September. Canelo and Golden Boy are not going to be able to resist the lure of the big money they can make against Golovkin for long without attempting to make the fight at whatever purse split.

Right now, it’s a little jarring for Golden Boy at hearing that Golovkin wants a 50-50 purse split, but if he sticks to that figure, the promotional company will eventually realize that’s the price they’ll need to pay to do business with Golovkin. They already made a ton of money off Golovkin in the first fight when they were able to get him and his promoter Tom Loeffler to agree to a horribly one-sided purse split. GGG and Loeffler arguably spoiled Golden Boy and Canelo by agreeing to take a 30 percent of the revenue. That was obviously a huge mistake on their part, because if they had negotiated tougher, they likely would have gotten a 50-50 split.

With all the boxing fans that Golovkin has that support him, it was a crime that he and Loeffler agreed to accept a 30 percent split. What’s done is done, Golovkin now must be assertive with Golden Boy and Canelo to let them know that he won’t agree to their attempts at getting him to agree to a 65/35 deal or anything less than 50 percent. If Golden Boy and Canelo don’t want to agree to the purse fairer pure spit of 50-50 now, they will once they start losing. When a fighter starts talking defeat after defeat, it has a way of making them more humble. Canelo will be more than happy to give Golovkin a 50-50 deal once he loses to Jermall Charlo, Billy Joe Saunders or Daniel Jacobs. I think it would be a blundering mistake on Golden Boy’s part if they think they only need to match Canelo against the likes of Gary ‘Spike’ O’Sullivan and David Lemieux to keep his popularity with the casual boing fans. If Canelo fights those guys, he’s going to lose a lot of fans for a long, long time. Canelo can’t afford to be viewed as a cherry picker in the eyes of the boxing fans, because they don’t respect fighters that do that.