Stevenson: If Badou is aggressive early, he’s getting knocked out 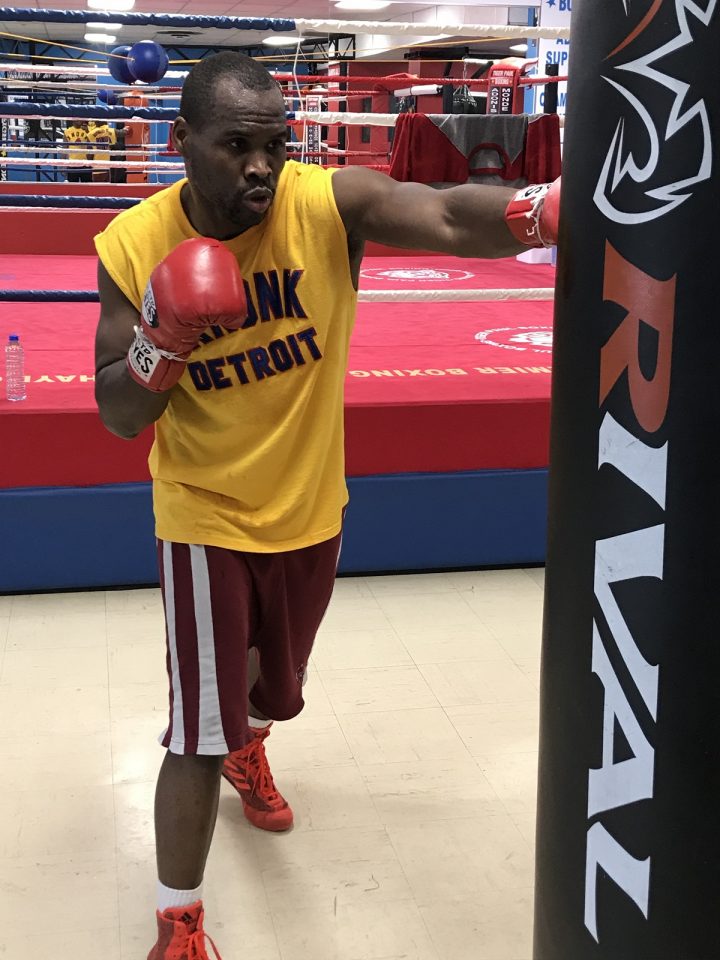 By Allan Fox: WBC light heavyweight champion Adonis ‘Superman’ Stevenson (29-1, 24 KOs) says he’s been training for a knockout in getting ready for his title defense against Badou ‘The Ripper’ Jack (22-1-2, 13 KOs) at the Air Canada Centre in Toronto, Canada.

Stevenson vs. Jack will be televised on Showtime Championship Boxing as part of a split-site telecast The other fight is WBC featherweight champion Gary Russell Jr. defending against No.1 WBC Joseph Diaz Jr. The start time for the Showtime telecast is at 10:00 p.m. ET/PT.

Jack is easily the best opponent Stevenson has faced since his defense against Tony Bellew in 2013. Jack is a little more rugged than Bellew, so we could see a real fight. With Jack’s body punching, he might have the ability to beat Stevenson on Saturday. Andrzej Fonfara gave Stevenson problems with his body punching in their first fight in 2014.

The southpaw Stevenson, 40, isn’t certain what to expect from Jack in this fight. Stevenson does have a warning for Jack. If he comes out aggressive in the early rounds, he’s going to knock him out right away. Stevenson has knocked out 8 out of his last 10 opponents since 2013. The only fighters that have been able to go the distance with him were Andrzej Fonfara and Sakio Bika. Those two are durable fighters that are difficult to knockout. In his rematch with Fonfara, Stevenson knocked him out in 2 rounds last June at the Bell Centre in Montreal, Canada.

”If Badou comes in aggressive, this could end very quickly,” Stevenson said. “You have to step into the ring with me to understand my power. If I connect right just one time, that’s it, lights out.”

Badou Jack has been knocked out once before during his 9-year pro career in losing to the heavy-handed journeyman Dereck Edwards in a 1st round stoppage in February 2014. Edwards hurt Jack with a big right hand early to drop him. Jack was badly hurt when he got up and was immediately put down a second time for the knockout. Since that fight, Jack has won 6 of 7 fights. Jack fought to a 12 round draw against James DeGale last year in January. Jack also fought to a 12 round draw against Lucian Bute in April 2016. The results of the fight were changed to a 12 round disqualification win for Jack after Bute tested positive for the banned substance Ostarine after the fight.

Stevenson has been out of the ring since his second with Fonfara, resting for the last 11 months. We’ll see on Saturday if the inactivity has hurt Stevenson’s game or not. In the last 2 years, Stevenson has been fighting only once a year, as his career has slowed to a crawl. That’s bad news for the contenders ranked in the top 15 with the World Boxing Council, because they’re being forced to wait long periods of time for a title shot against a champion that only fights once a year. If Stevenson sticks with his once a year pattern of fighting, then his next title defense will be in May or June 2019. It’s a pity that Stevenson isn’t more active, but that’s his decision. He might regret it after he retires that he chose to fight only half as many fights each as he could have.

If Stevenson gets pas Jack, then his next title will likely be against #2 WBC Oleksandr Gvozdyk. #1 WBC Eleider Alvarez has given up on waiting for a title shot against Stevenson, and he’ll be challenging WBO light heavyweight champion Sergey ‘Krusher’ Kovalev on August 4. Alvarez got tired of waiting for his title shot against Stevenson, so he went in a different direction by signing to fight Kovalev.

Stevenson never seemed too eager to fight Alvarez for some reason. Unlike Alvarez, Gvozdyk likely won’t agree to a step side deal with Stevenson. That move worked with Alvarez, but it probably won’t work with Gvozdyk. He’s not waste his career taking step side payments. Gvozdyk wants his title shot.

“I’m the king at light heavyweight,” said Stevenson. “I beat the king to become the king. I know that I’ve accomplished some great things and me and my team plan to continue to do everything we can to stay on top.”

Stevenson has held his WBC 175 lb. title for the last five years since beating WBC champion Chad Dawson by a 1st round knockout in June 2013. Stevenson has defended his WBC title successfully 8 times since then.

Those are decent fighters at the world level, but they’re not viewed as being in the same class as Gvozdyk, Jack, Juergen Braehmr, Sergey Kovalev, Marcus Browne, Dmitry Bivol and Artur Beterbiev. Even Anthony Yarde would have to be considered better than the fighters that Stevenson has been defending against.

Stevenson hasn’t proven that he’s the king of the light heavyweight division. There was a time where you could make an argument that Stevenson was the best fighter in the 175lb division, but with the emergence of WBA light heavyweight champion Dmitry Bivol, Stevenson might be No.2. There’s also IBF champion Artur Beterbiev that could prove to be a difficult opponent for Stevenson to fight if the two of them ever faced each other. Beterbiev, 33, is younger than the 40-year-old Stevenson, and looking very hard to beat.

“I’m the best fighter in this division, period,” Stevenson said. When I win on May 19, I’ll just be doing my job. People might still talk trash, but I’ll still be the champ.”

Stevenson’s fight against Jack is a step in the right direction in defending against a good fighter instead of defending against beatable fringe contenders like he’s been doing. It would be nice to see Stevenson face Bivol, Beterbiev or Kovalev. If Stevenson is going to get the most out of the remainder of his pro career, then he’s going to need to defend against better opposition from this point on and not revert to his old style of facing weak opposition to milk his WBC title.