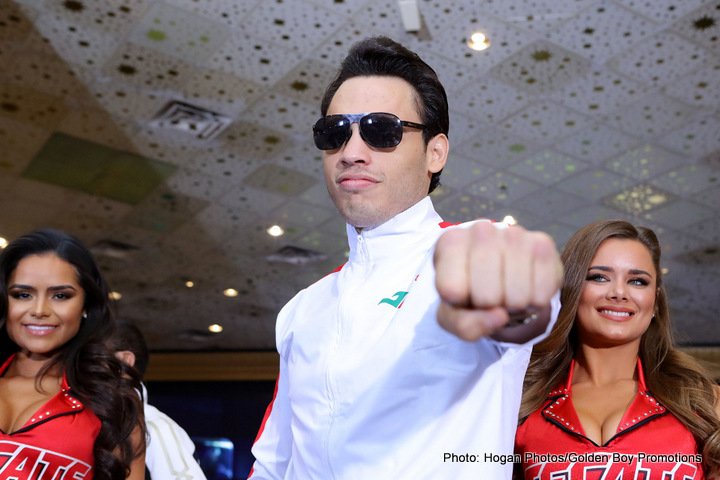 By Dan Ambrose: Julio Cesar Chavez Jr. reportedly is in talks with Matchroom Boxing promoter Eddie Hearn to possibly sign a 3-fight deal to fight on DAZN, according to BoxAzteca. This move would be Hearn looking to sign a fighter that would appeal to U.S boxing fans to subscribe to his new streaming deal.

Hearn is going to need to do much better than Chavez Jr. to get U.S boxing fans to subscribe to DAZN. Signing Chavez Jr. is a move that is 6 years too late, because he’s been looking like a shot fighter for about that long. Hearn might be over his head with his deal in signing up with DAZN to provide fights for the U.S boxing fans. Hearn doesn’t have the fighters to attract subscribers in the U.S market, and he’s clearly going about it in the wrong way in trying to sign over-the-hill former champions like Chavez Jr. Hearn needs to sign young guys like Jaime Munguia instead of shot fighters like Chavez Jr.

Chavez Jr. (50-3-1, 32 KOs) will be fighting next on August 4 or 11 at a catch-weight of 169 pounds against one of the following fighters: Gabriel Rosado, Sergio Mora and Vanes Martirosyan.

This potential move by Hearn to ink Chavez Jr. for three fights strikes one as a sign of desperation on his part. It might be better for Hearn to sign Chavez Jr. on a fight per fight basis, because that way he won’t be stuck having to eat the other two fights if he gets beaten up by Rosado, Mora or Martirosyan.

A lot of boxing would pick all three of those guys to beat Chavez Jr. with ease, because his hand and foot speed now are glacially slow. Chavez Jr. can’t be counted on to start training camp in reasonable condition. That forced him to use his training camps as fat farms to lose tons of weight, and he ends up drained by the time his fights. When Chavez Jr. was younger, he was able to take off massive amounts of weight during training camp and still perform well, but that’s no longer the case now that he’s gotten older.

Signing a 3-fight deal with the 32-year-old faded Chavez Jr. might be a risky move on Hearn’s part, because the former WBC middleweight champion has looked terrible in six out of his last seven fights dating back to 2012. Chavez Jr. has let his weight get out of control in between fights, and he’s struggled to get down to the 168 lb. weight limit since moving to the division after his one-sided 12 round unanimous decision loss to Sergio ‘Maravilla’ Martinez in September 2012. If Chavez Jr. loses his first fight to Rosado, Mora or Martirosyan, Hearn would end up getting stuck with him for another two fights, which might do poor ratings on DAZN.

Hearn would be better off finding relevant fighters to sign that are young, talented, dedicated and have a future in the sport. Chavez Jr. looks like he’s got nothing left at age 32. He hasn’t fought since losing to Saul Canelo Alvarez last year in May in a dreadfully bad 12 round unanimous decision loss. It was an embarrassing loss for Chavez Jr., and perhaps the worst performance of his career aside from his 9th round knockout loss to Andrzej Fonfara in 2015.

The 32-year-old Martirosyan (36-4-1, 21 KOs) was knocked out in the 2nd round in his last fight by IBO/WBA/WBC middleweight champion Gennady ‘GGG” Golovkin (38-0-1, 34 KOs) on May 5 at the StubHub Center in Carson, California. Martirosyan came off of a 2-year layoff and had to move up one weight division for him to take the fight with GGG. If Martirosyan fights Chavez Jr. on August 4 or 11, he would be moving up 3 weight classes to take the fight at light heavyweight. 169 is one pound over the super middleweight limit, which makes it a light heavyweight. Martirosyan doesn’t have the size o be fighting at 169. It would be grossly unfair to him, but the fact that his name is being mentioned as a possible opponent for Chavez’s August 4 or 11th fight suggests that they’re looking to tip the scales in his favor to increase the chances of a victory for him. Of the three options for Chavez’s August fight, Martirosyan is the most beatable for him, and that’s only because he fights two divisions below him at junior middleweight.

Gabriel Rosado (24-11, 14 KOs) would be a tough out for Chavez Jr. right now. Rosado can punch, and he’s got better hand speed than Chavez Jr. Rosado can take a good shot, and he would be all over a slow fighter like Chavez Jr. There is certain type of guys that Rosado thrives against, and Chavez Jr. is that type. Hearn would be extremely unhappy if he signs Chavez Jr. to a three-fight deal and he loses immediately to Rosado, who is still a live dog at 32-years-old.

Former WBC light middleweight champion Sergio Mora (29-5-2, 9 KOs) fights at 168 now, but he’s lost two out of his last three fights. Mora did win his last fight in beating Alfredo Angulo by an 8th round split decision. Angulo is Chavez Jr. 2.0. The two of them are very similar at this point in their careers as far as hand speed, and where they’re going in the sport. Mora showed against Angulo that he still has his ring smarts if not his youth and his physical skills that he once had 10 years ago. Mora would be a tough fight for Chavez Jr. and he would lose to him as well.

The type of fighters that Hearn needs to sign to attract interest from U.S boxing fans in subscribing to DAZN each month are these guys:

I don’t think Hearn is going about it in the right direction if he’s trying to sign Chavez Jr., because he’s not capable of beating the good fighters at 168, and he’ll likely lose to the three candidates for his next fight in August.