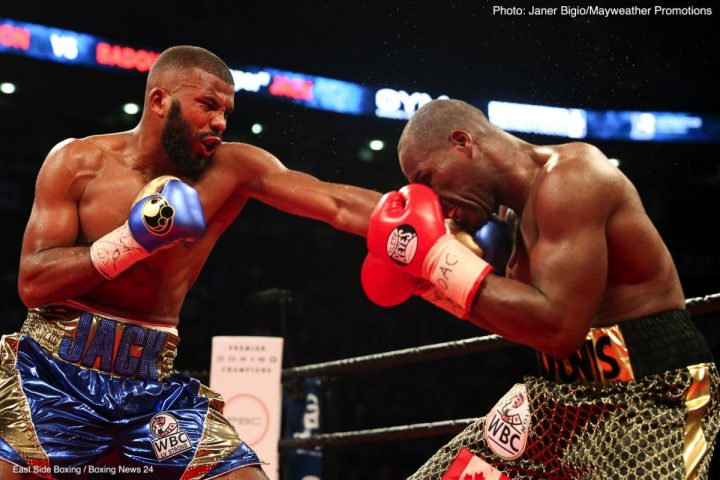 By Chris Williams: Badou Jack (22-1-3, 13 KOs) says he wants a rematch with WBC light heavyweight champion Adonis Stevenson (29-1-1, 24 KOs) after fighting to a 12 round majority draw against him last Saturday night in their fight on Showtime Championship Boxing at the Air Canada Centre in Toronto, Canada.

Jack, 34, said he thought he won the fight, and that he thinks the judges might have it a draw because they’re jealous of his promoter Floyd Mayweather Jr. That’s one theory that Jack had afterwards in explaining why the judges didn’t give him the nod.

The 34-year-old Badou now has 3 draws on his resume, and he would have had a fourth draw if not for the judges changing the results of his fight against Lucian Bute to a 12th round disqualification win after he tested positive for a banned substance after their April 2016 fight. That fight was scored as a draw by the judges.

Like last night’s fight against Stevenson, Jack didn’t do enough to deserve the victory in the Bute fight. Far past his prime in 2016, Bute fought Jack to a standstill. Jack complained immediately after the fight that he should have been given the victory over Bute, but the fact is he didn’t do enough. It was lucky for Jack that Bute tested positive for the banned substance ostarine, because otherwise he’d have his 4th draw on his resume.

Jack has draws against the following fighters:

• Lucian Bute – 12 round draw in April 2016. The results were later reversed after Bute tested positive for the banned substance ostarine. The Washington State Athletic Commission change the result from a draw to a 12 round disqualification

Jack’s fight against George Groves in 2015 was viewed as a 12 round draw in the eyes of a lot of boxing fans, because Jack had fought well in the first half of the fight, but then he coasted in the second half of the contest, allowing Groves to get back into the fight.

It’s not a conspiracy that Jack keeps being involved in fights that wind up being scored as a draw. It’s more of a reflection of the fact that Jack doesn’t hard in many of the rounds. He likes to take rounds off. Jack also tends to start slowly in his fights, doing very little in the first 6 rounds, allowing his opponents to build up huge leads on him. We saw that in Jack’s fights against Periban and DeGale. Jack did zero in the first part of those fights, and then he had to rally to come on to get a draw.

It’s not a conspiracy that Jack is failing to get the wins. It’s more of a mental thing with him. He procrastinates during the crucial first half of his fights, giving the rounds away, and then he finally goes on the attack once things are looking bleak for him. The thing is, Jack only does this against guys that are difficult opponents in terms of them being aggressive. When Jack fights an aggressive fighter with power, he waits until the second of the fights before he starts throwing a lot of punches. But by giving away the first 5 to 6 rounds, Jack finds himself in a situation where he needs to win most of the remaining rounds just to get a draw. Jack is not a knockout puncher, so he’s forced to dominate the second half of his fights to squeak out a draw. I don’t see this changing with Jack. He’s been this way since he first turned pro in nine years ago in 2009, and he’ll likely continue to fight that way for the remainder of his career.

”No judge had him (Adonis Stevenson) winning,” Jack said. ”I have no idea why I can’t get a decision. It could be that they’re jealous of Floyd (Mayweather) and don’t like him. I can’t do anything about it. I’m not the judge. I have to respect their decision.”

Jack sounds like a poor sport with the way he’s complaining and trying to come up with reasons why the judges scored it as a draw. Instead of Jack looking at it as a negative that the judges gave him a draw, he should see it as a positive. He deserved a big fat loss, but the judges gave Jack a draw and they saved him from his second defeat.

Jack is right about him not being a draw. He needs to stop blaming the judges and start taking responsibility for his failure to learn from his mistakes. Jack doesn’t seem to be doing a very good job of studying his past fights to iron out the flaws in his game, because he keeps repeating the same mistakes that he’s made in the past. As philosopher Edmund Burke once said, ”Those who don’t know history are doomed to repeat it.” Jack is going to keep having the same thing happen to him in terms of his fights being scored as draws. If Jack can stop being lazy during the crucial first 6 rounds of his contests, then he’ll go a long ways towards winning more of them. There’s no guarantee that Jack would have beaten Stevenson if he had fought harder in the first six rounds last Saturday. In fact, it might have worked against Jack if he had gone right at the 40-year-old Stevenson in the first half of the fight because he would have been vulnerable to getting hit with more of his powerful body shots. Stevenson was bothering Jack with his shots to the midsection in the first six rounds of the fight. In rounds 7, 8 and 9, Jack attacked Stevenson when he began to show signs of tiring, However, in the 10th, Stevenson suddenly hit Jack with a left to the body that visibly hurt him, causing the native from Sweden to hold on for the remainder of the round to escape being knocked out. Jack didn’t recover from that body shot until the 12th round after giving away the 10th and 11th rounds.

“He didn’t really hurt me either,” Jack said of Stevenson’s power shots. “Nothing happened. It is what it is. Let’s do the rematch. Let’s do it in Vegas. I came to his backyard. Now it’s his turn to come to mine. This is not even my hometown,” Jack said of Las Vegas. “I’m from Europe.”

I’m not sure who Jack is trying to kid by saying that he wasn’t hurt by Stevenson during the fight. Are the boxing fans supposed to believe what they see or what Jack is telling them? It’s clear that Jack was hurt in the 10th round after getting hit with a body shot. Obviously, Jack wasn’t hurt as far as his brain being out of commission from the body shot but he was hurt. That shot from Stevenson to Jack’s solar plexus had him badly hurt and ready to be knocked out.

As far as Stevenson fighting Jack in Las Vegas, I’m not sure that he’ll do that. It’s been eight years since Stevenson last fought in the U.S against Darnell Boone, and I don’t see that changing. It’s more likely than not if Jack wants a rematch with Stevenson, he’s probably going to need to come to Canada to make it happen. Stevenson is the WBC light heavyweight champion and the A-side. Jack is the challenger and hardly in a position to be giving orders for where the rematch with Stevenson should take place. Of course, if Jack doesn’t want to go back to Canada, then he doesn’t have to. Jack can always look to challenger WBA 175lb champion Dmitry Bivol or IBF champion Artur Beterbiev. I don’t think Jack beats either of those guys, because they both can punch and they’re young. Jack gave up his WBA title last year rather than fight Bivol. The only guy that Jack has a chance of beating in terms of the champions is WBO champion Sergey Kovalev. Unfortunately for Jack, he’s not rated in the top 15 with the World Boxing Organization, so he’s probably not going to get a title shot against Kovalev anytime soon if ever.