Jessie Vargas: Defeating Adrien Broner will get me a world title shot 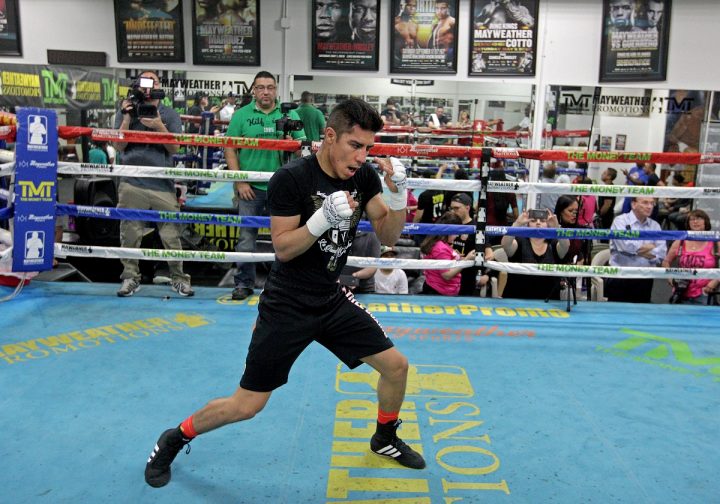 By Jim Dower: Jessie Vargas (28-2, 10 KOs) says he’s going to defeat former four division world champion Adrien Broner (33-3, 24 KOs) in spectacular fashion and then he’s going to get a title shot immediately after that in his next fight.

Vargas, 28, is certainly ranked high enough to get a crack at a world title with three of the four sanctioning bodies. Despite having fought only once in the last two years, Vargas is rated #3 WBA, #3 WBC and #4 IBF. Vargas’ only win in the last two years is a 10 round unanimous decision victory over journeyman Aaron Herrera last December. A lot of boxing fans see Vargas’ fight with the 28-year-old Broner being a toss-up fight that could go either way. For Vargas to be so confident, he might be getting a little ahead of himself.

“I see myself being victorious,” Vargas said to Fighthub about his fight next Saturday against Broner. “I feel stronger than ever. I feel extremely strong and fast. The moment I see an opening, I’m going to take it. If I can take him down, I’m going to finish him. If I can get him early, I will. That’s the plan. As of now, I’m prepared for a 12 round fight. If it ends sooner, then it’s even better for me. Whether it’s a knockout or decision, I’m going to win,” Vargas said.

Vargas’ best wins of his 10-year-old pro career have come against these fighters:

• Anton Novikov – controversial 12 round unanimous decision. Vargas appeared to lose but was given a victory

Besides his knockout win over Sadam Ali, Vargas hasn’t shown the kind of punching power during his career that would suggest that he’s going to be able to knockout Adrien Broner on April 21. Vargas isn’t that kind of a puncher unfortunately. If he tries to slug with Broner, he might wind up getting clipped with something himself and get taken out.

Vargas is a good fighter, but he’s not going to beat any of the current welterweight champions in the division at this point. In 2016, Vargas took advantage of a vacancy with the World Boxing Organization having their 147 lb. title available and he was able to beat Sadam Ali by a 9th round knockout to win the strap.

That was before Terence Crawford and Jeff Horn had emerged as top rated fighters in the WBO’s rankings. Now that those guys are there, Vargas has little chance of winning the WBO belt. Vargas won’t likely do well against WBA/WBC champion Keith Thurman or IBF champion Errol Spence. There are also some very good contenders at 147 that would likely beat Vargas as well in Shawn Porter and Danny Garcia.

Vargas WON’T be getting a title shot against WBA/WBC welterweight champion Keith ‘One Time’ Thurman, because he’s got a tune-up he’ll be taking in June and he’s not going to take any risks with that fight. When Thurman does fight a contender, it’ll likely be his WBC mandatory Shawn Porter later this year if he doesn’t suffer another injury that keeps him from fighting after his June fight.

We don’t even know if Thurman will make it to his June fight in one piece because he keeps suffering injuries and can’t stay active. Vargas’ best shot at getting a world title fight is against IBF welterweight champion Errol Spence Jr., but that fight won’t likely happen until November or December at the earliest.

Spence has a fight coming up on June 16 against his IBF mandatory challenger Carlos Ocampo in Dallas, Texas. Once Spence get through that fight, he might be open to a fight against Vargas. That would be an interesting fight for the boxing public, because it’s pretty clear that Thurman isn’t going to be fighting him anytime soon.

Broner has never been knocked out during his 10-year pro career. The closest Broner has gotten to being knocked out was in his 12 round unanimous decision loss to Marcos Maidana in December 2013. Vargas doesn’t throw enough shots in combination form to knockout a fighter like Broner.

The guys that have given Broner a lot of problems during his career, Marcos Maidana, Adrian Granados, Mikey Garcia and Shawn Porter – were attacking him relentlessly with shots. They never let up on Broner, and he couldn’t keep up with the pace they set. Vargas fights at a slower pace than those fighters, and he rarely throws combinations. Most of Vargas’ punches are one at a time type of shots that his opponents can predict, and either block or brace for them.

What is clear about this fight is that it’s a must-win for Broner. He can’t afford to lose this fight if he wants to be a relevant fighter in the sport of boxing. It won’t be over for Broner if he loses to Vargas, but it might be over for him as far as being a big name. Broner is starting deteriorate.

Broner isn’t quite there yet, but he’s well on his way to slipping out of the first tier at 140. Broner’s career was so promising up until 2013, but since his loss to Marcos Maidana, he’s not looked good and he’s had problems in the three fights he’s had against better opposition.

Here are Broner’s fights since his 12 round unanimous decision loss to Maidana in December 2013:

The only good fighters that Broner has fought in his last eight fights are Granados, Garcia and Porter, and he arguably lost to all of them. Broner was given a 10 round split decision victory over Granados in a fight that took place in his hometown of Cincinnati, Ohio, but there aren’t too many boxing fans that believe he deserved that win. For the hardcore and casual fans that made the effort to watch the Broner-Granados fight, they saw Granados as the winner.

For Vargas to beat Broner, he only needs to take the fight to him the way that Granados, Garcia and Porter did and make sure he doesn’t let up on him. The blueprint has already been created by Maidana in how to beat Broner, and it’s been followed now on three occasions and it’s worked each time. Broner isn’t making improvements in his game unfortunately, and I don’t think he’s going to. If Broner could make improvements, he would have done so by now.

Broner has a new trainer in Kevin Cunningham in taking over the training from his longtime trainer Michael Stafford. I doubt that it’s going to help too much. Broner has to be able to fight hard, throw a lot of shots, and attack his opponents the way he was doing during the zenith of his career when he was fighting at super featherweight. That was the best division for Broner. He was at his best when he was fighting at 130. When Broner moved up to 140, he wasn’t the same fighter that he’d been previously.