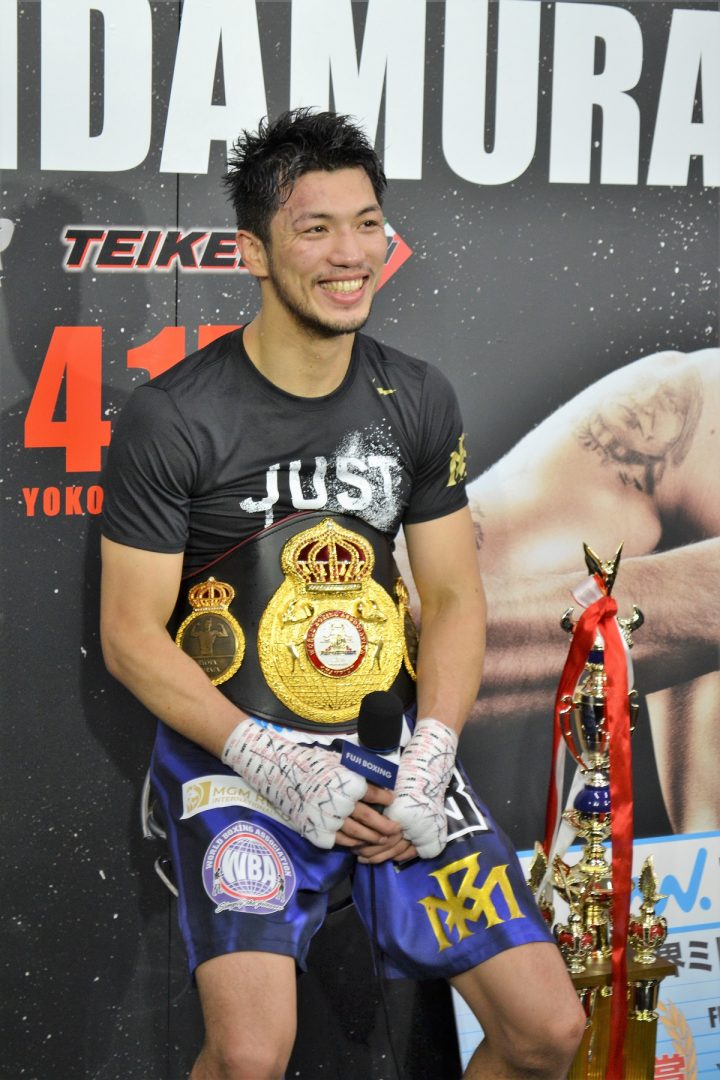 The bout was largely a game of cat and mouse with Murata spending large portions of the fight chasing the Italian around the ring, trying to close the distance and land a big punch. He found success in patches, occasionally forcing his foe into the corner to give himself space and time to unload. When he did manage to land leather, his opponent would throw a combination that would have little effect on the Japanese, and then rebuild the distance by moving away from the ropes. But then, in the eighth round, Murata broke the deadlock with a deadly right that dropped the Italian and after struggling to make the count, the referee stepped in and called time on the action.

Murata came into this fight of the back of his ‘revenge match’ against Hassan N’Dam six months ago to secure the WBA regular middleweight title. In that rematch, Bob Arum – Murata’s joint promoter was in attendance and at that time there was a feeling of Murata going on to bigger things once N’Dam was out of the way. So when his next opponent was announced, some eyebrows were raised. Blandamura, a solid fighter, has never fought at elite level nor has he ever been in a world title fight. His best opponent to date was Billy Joe Saunders whom he lost to by KO in 2014. Even in that fight, the Saunders he lost to was far inferior compared to the Saunders of today. Since then he has only fought at mostly small venues in Italy and so the chances of an upset tonight were slim. So slim that the bookmakers were offering miniscule odds of 1.02 (imperial: 1/33) for a Murata victory.

So what is the strategy going forward for Murata? It would be difficult to argue that he is Japan’s best pound for pound fighter especially with the likes of Naoya Inoue around, but he is hands down the country’s biggest boxing star in terms of marketability. It would seem that instead of him trying to hustle his way into the mix against the current best in the division, his management and promotion have decided on an all too familiar trajectory of cash-cow-milking. Prime time TV, big sponsorship, big viewership, big knockouts; everybody’s happy.

Before the fight, Arum said Murata would next face fellow Top Rank fighter Esquiva Falcao whose last four opponents have a combined total win ratio of just 70%. Not an exactly mouth-watering prospect and so yet another fight that will leave next to no dent on the division. Bob, who again showed up in Tokyo for tonight’s fight, also mentioned the possibility of fighting Golovkin in a super fight at the 55,000 capacity Tokyo Dome should Murata get past Falcao. By the time that fight may come around, GGG himself will be likely have sights on his own retirement and so a generous payday in Japan would likely be a tempting option for the Kazakh.

If I have given the impression that Murata is lacking in terms of ability against the current elite class of middleweights, then I have mislead. In all likeliness, it is true that most close-watchers of the sport, myself included, would find it difficult to pick him against the likes of Golovkin, Saunders, Canelo, and Jacobs. But the most important point is that in all honesty, we have no idea how he would fare because he has as of yet fought nobody on a comparable level.

If Murata chooses to manipulate his marketability and keep collecting sizeable paychecks, fair enough, who could discredit him for that? But consequentially he cannot expect to be thought of as one of the elites of this era, not even close, if he chooses that as a path to walk down. For that accolade, he will need to show more bravado in his opponent selection, an opportunity I for one sincerely hope he will embrace.

Jessie Vargas: Defeating Adrien Broner will get me a world title shot »