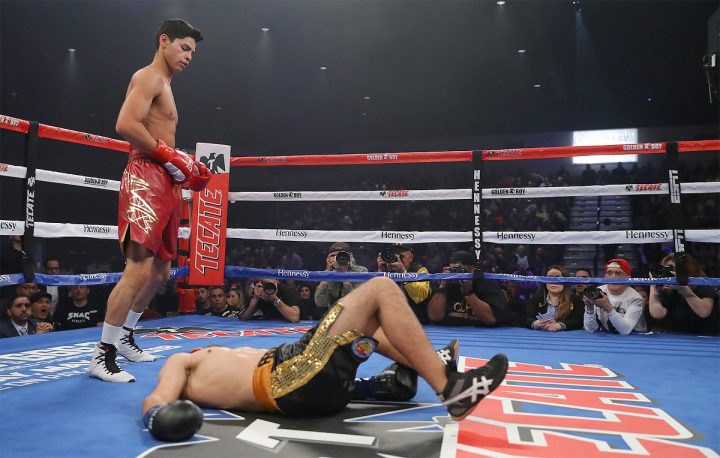 Mikey doubts third Garcia’s promoters at Golden Boy would let him anywhere near Davis right now and they’re the ones that will make the decision when that fight happens. It won’t be Garcia in charge of making the fight. That’s why he has Golden Boy. They’re going to look out for him and keep him from getting hurt by facing someone he’s not ready to fight.

Mikey respects the way that Ryan ‘Kingry’ Garcia has built up a huge fan base on social media without having accomplished anything in boxing. But he also believes strongly that he shouldn’t mess with Tank Davis right now.

“Can he box,” Mikey Garcia said to ES News Reporting about super featherweight Ryan Garcia. “He can box. Where will he go? It’s hard to tell. If I was in their camp, I’d take my time. He’s very young still. He’s got a lot to learn, and a lot to develop. He’s not ready for that,” Mikey said when asked if Ryan Garcia is ready to face former super featherweight world champion Gervonta Davis.

Davis is an unbeaten former world champion. He lost his IBF 130 lb. title on the scales in his last fight against Francisco Fonseca in coming in 2 lbs. over the weight limit a 132 last August. Davis still won the fight by an 8th round knockout, but he hasn’t fought since then. Davis will be fighting this Saturday night against former WBA World featherweight champion Jesus Andres Cuellar (28-2, 21 KOs) at the Barclays Center in Brooklyn, New York.

A lot of boxing fans believe Ryan Garcia is just hype, a fighter who is popular due to social media, and not because of because of what he’s done in boxing, which is basically nothing. The 19-year-old Garcia hasn’t fought any good fighters yet for anyone to get excited about him. He’s built up his popularity singlehandedly outside of the boxing ring with social media and with interviews. Garcia’s wins have come against journeyman level opposition for the most part.

Those are all lower level journeyman and 2nd tier fighters. There’s nobody that Garcia has fought that is good enough to get excited about his future and assume that he’s going to be the next Oscar De La Hoya. Garcia didn’t go to the Olympics like many fighters that are heavily hyped. Garcia finished his amateur career with a record of 215-15 but didn’t beat the best fighters from all around the world to show that he’s got the pedigree to be a great fighter. What will be sad is if Garcia turns out to be nothing but hype. He would end up as just one of the many fighters in boxing that had his career hyped from the start while he was facing fodder opposition, but then he fell apart when he was stepped up a level against better opposition.

It’s likely that the main reason Ryan Garcia is calling out Davis is because he knows it’ll get him a lot of attention with the boxing media. Garcia doesn’t have to worry about Golden Boy making the fight between him and Davis, because they’re not about to let him take that fight. That means Garcia can call out any fighter in the media without having to fight that person. So, Garcia is essentially just name dropping to get attention without there being any chance of him fighting Gervonta. If Golden Boy did give Garcia his wish and put him in with Davis, it could be a real nightmare for him.

It would be interesting to see what happens if Golden Boy Promotions were to let Garcia have his way and fight the southpaw Gervonta. It could end badly for Garcia. Davis has heavy-hands, and he would bound to get to him sooner or later with one of his big punches to take him out. It would be a boy against man competition, and I think it would end badly for Garcia. Davis is too mature at 23, and he hits too hard. It’s not by accident that Davis has been knocking out everybody he’s facing.

Garcia will be fighting next month in headlining his own card against 30-year-old Jayson Velez (26-4-1, 18 KOs) in a 10 round fight at the StubHub Center in Carson, California. Velez used to be a highly thought of contender up until three years ago when he started losing on a regular basic. Velez was beaten in four consecutive fights by Ronny Rios, Joseph Diaz, Rene Alvarado and Alfredo Mercado.

The match-making for Velez was ruthless by his management in putting him in four tough fights in a row. Velez’s management has backed him off from stiff competition recently and he’s responded well, beating Alberto Mercado, Giovanni Caro and Juan Manuel Lopez. It’s unclear whether Velez has his confidence back or not. If he hasn’t, he’s going to have problems with the slick fighting style of Garcia. He’s someone that you need to have a lot of power, and you’ve got to be able to throw well to the body to focus on an area where he can be hit.