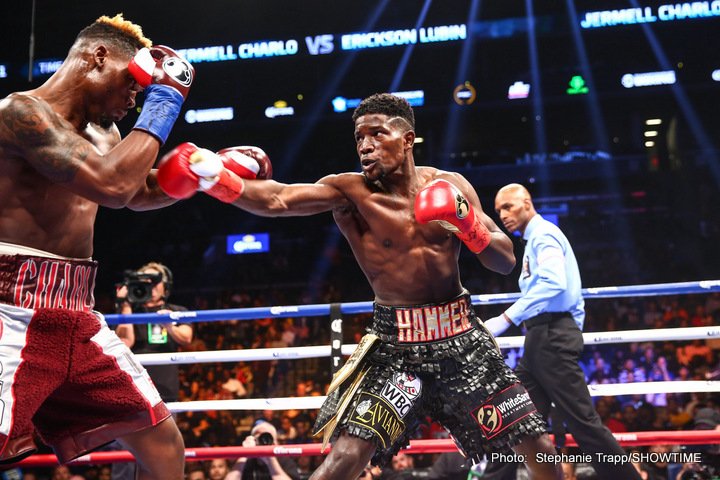 By Jim Dower: Former world title challenger Erickson ‘The Hammer’ Lubin (18-1, 13 KOs) will be looking to bounce back from his brutal 1st round knockout loss to WBC junior middleweight champion Jermell Charlo when he returns to the ring in less than two weeks on April 28 against Oscar Cortez (26-3, 14 KOs) in a 10 round fight against Don Haskins Center in El Paso, Texas.

What’s surprising is Lubin’s fight with Cortez won’t be on the televised portion of the card, according to Dan Rafael. Lubin is arguably the best fighter on the card by far, and yet his fight won’t be televised. Granted, it’s a mismatch to be sure, Lubin is the best thing the card has going for it.

Just six months ago, Lubin was a blue-chip talent and the 2016 prospect of the year by ESPN, and now he’s not being televised and fighting on undercard of a fighter going nowhere at 147.

Whatever the case, Lubin-Cortez will be fighting on the undercard of the welterweight clash between Josesito Lopez and Miguel Cruz. Had Lubin won his last fight against Charlo, he’d be the headliner on this card instead of being relegated to the undercard of welterweight fringe contender Josesito Lopez.
The fight will be televised on Premier Boxing Champions on Fox, according to Dan Rafael of ESPN.

Lubin, 22, took a huge risk in his last fight in taking a huge step up in facing Charlo last October. Lubin had never faced a quality contender before during his short five-year pro career, and he paid for it by getting knocked out in the 1st round. Charlo, 27, isn’t a huge puncher, but Lubin made him appear that way by leaving himself wide open by crouching down in front of him.

Charlo took advantage of the rookie mistake by Lubin by nailing him with a hard shot that flattened him for the knockout. Lubin was concussed on the canvas after being knocked down, and it took him a long time before he was able to get up. It was a brutal knockout. Lubin never knew what hit him.

Lubin is a good fighter, but he had no business fighting someone as old and as experienced as Charlo. Sticking a 22-year-old fighter in the ring with Charlo was asking for trouble, and it’s not surprising that the fight ended badly for Lubin. Charlo was too advanced for Lubin.

The 24-year-old Cortez is coming off a 4th round knockout loss to journeyman Francis Lafreniere (16-6-2, 9 KOs) last June. That defeat snapped a 3-fight winning streak for Cortez. Before that, Cortez was knocked out in the 1st round by Francisco Javier Perez in May 2013 and Carlos Jimenez in a 6th round knockout in September 2012.


« Andrew Moloney vs. Richard Claveras on May 19