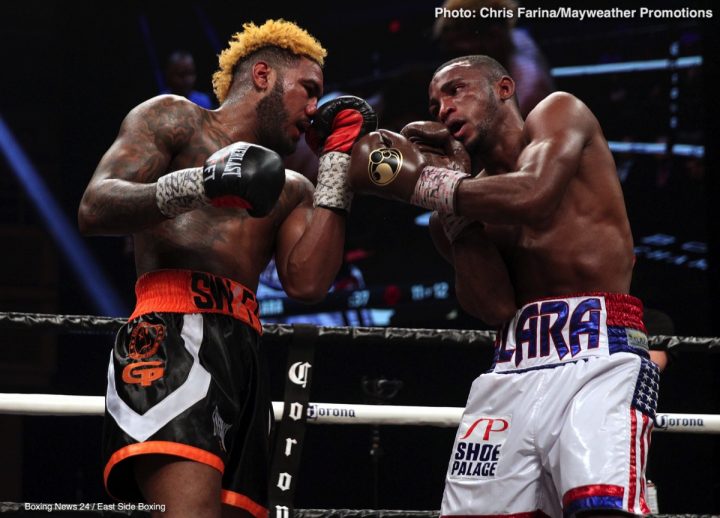 The Charlo vs. Trout fight still isn’t signed, but it’s the one that is being talked about. Timing-wise, Charlo is catching Trout at an all-time low for him in terms of his career. Trout is coming off of a 10th round stoppage loss to Hurd last October in a fight in which he took a lot of punishment.

Trout’s trainer halted the fight after the 10th round had ended because he’d been hurt and had been struggling in the last two rounds. Hurd had worn Trout down completely with his nonstop heavy punches to the head and body. Trout had hung tough in the first 6 rounds of the contest though. It was only after Hurd started to walk him down and throw a lot of shots from rounds 7 through 10 that Trout wilted from the pressure. If Hurd puts that kind of pressure on Charlo, he could easily take him out just as fast. Charlo isn’t the type that can handle taking punishment without nervous.

Charlo-Trout will be shown on Showtime Championship Boxing at the Barclays Center in Brooklyn, New York. Charlo now wants to beat Trout in an interim fight and then go after the difficult opponent in Hurd. That’s going to be very tough for Charlo because he’s not faced a pressure fighter with the kind of power that Hurd has. Charlo was at ringside last Saturday for the Lara-Hurd fight. Immediately after the fight, Charlo began to talk about wanting to fight Hurd later this year to find out which of the two is top dog.

Charlo might come apart facing Trout. Jermell’s brother Jermall had huge problems beating Trout, and Jermell is not in the same class as his brother in the power department. Jermall has always been the bigger puncher, and the more rugged of the two brothers. Trout does well against fighters with a low punch output like Jermell. Trout was worn down by Hurd because he couldn’t handle his high work rate. Jermell is unable to throw a lot of shots, because he’s got too much of the Floyd Mayweather Jr. pot shot style of fighting about him.

Charlo has looked good only recently since he stopped facing punchers. In Charlo’s last four fights, he’s suddenly started looking good when he’s faced lesser guys and inexperienced fighters like 22-year-old Erickson Lubin, Charles Hatley, John Jackson and Joachim Alcine. Those were all mediocre fighters. Lubin has some talent, but he’s clearly not ready to face quality guys. We saw that clearly when Lubin was knocked out right away in the 1st round. Before that, Charlo had struggled against Vanes Martirosyan in winning a controversial decision over him and Gabriel Rosado. Charlo looked bad in both of those fights, and he was given scoring that didn’t seem to go with the way the fights played out. Charlo was boxing, moving and trying not to get hit. He fought like he was afraid the whole time. It’s only recently when Charlo started getting matched against weaker opponents that he’s suddenly started looking like a furious puncher, which he clearly isn’t.

Trout is perceived by some boxing fans as being on the downside of his career due to his losses to Hurd, Jermall, Lara and Saul Canelo Alvarez. I think it’s more of a case of Trout being matched against fighters that were always going to be too good for him. Trout is a good fighter, but he’s not a huge puncher and he’s vulnerable when he faces guys that have huge power. Lara isn’t a huge puncher, but he’s so accurate. He was able to beat Trout with his pinpoint shots in defeating him by a fairly one-sided 12 round unanimous decision in December 2013.

Trout had his moments in the fight, but he fell apart in the later rounds when Lara knocked him down with a hard left to the head. The timing of that fight for Trout was bad, as he came right after his loss to Canelo in April of 2013. Canelo had knocked Trout down in the 7th round, and that seemed to make the difference in the fight. Trout had outworked Canelo through the entire contest, but the judges were giving almost every round to the Mexican star. Trout is still a very good fighter at his stage, and I think he could potentially beat Charlo if he can take him into the deeper rounds and land some hard shots. When Charlo starts getting hit his opponents, he gets nervous and starts running. He’s a totally different fighter mentally and physically than his brother Jermall.

It’s not going to be the end of the world if Charlo loses to Hurd. Charlo will be able to pick up the pieces of his career and recapture his WBC title once Hurd moves up to 160, which he plans on doing as soon as he unifies the division. Hurd isn’t going to wait around to try and get a fight against WBO junior middleweight champion Sadam Ali. If he’s not interested in fighting him, then he’ll move up to middleweight.

Gary Russell Jr. vs. Joseph Diaz on May 19 on Showtime »