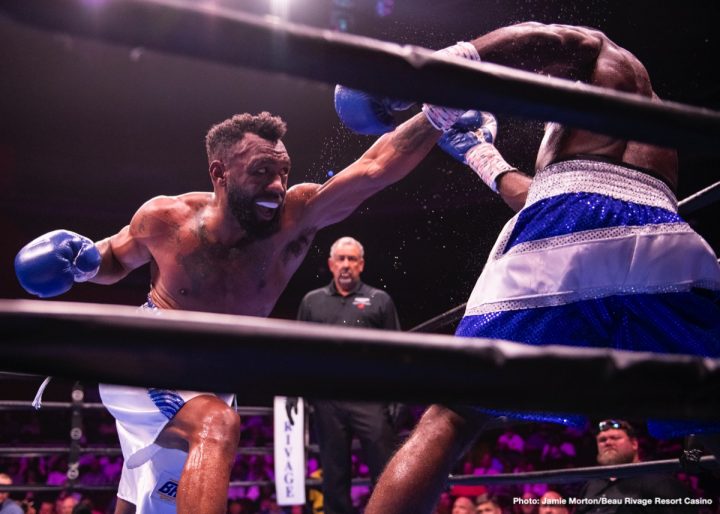 “We need to do that again. That wasn’t right,” said Trout of Las Cruces, N.M. “Let’s do it again. That was after a year layoff. Timing is going to be off. Now that I am a little more active. I need an immediate rematch. Immediate.

“You never know how the judges are seeing it, but I know 99-91 for (Gausha) wasn’t right. I was definitely in there more than one round,” continued Trout. “But I didn’t feel good in there tonight. I had to force a lot of things, and I had to close the gap in the later rounds.”

“I felt like I won the fight,” said Cleveland native Gausha. “That’s boxing sometimes. You don’t get the decision.

“I have been through a lot this camp. It is what it is,” continued Gausha. “I caught a bad cold the last week of training camp. My father passed away during this training camp.

“I don’t really care about a rematch with Trout,” concluded Gausha. “I just want bigger fights. I’d like to do something different. But if we have to go through (Trout) again we’ll do it and just make it more convincing next time.”

“I’m always emotional when I fight,” said Booker. “Today, I just let it all out. I feel like this was my time to shine after finally making it to this level. This was definitely a step-up fight for me, facing a guy that they told me nobody else wanted to fight.

“I feel like I’ve got nothing to lose,” continued Booker. “I just feel like I’m supposed to be here. I’ve put in a lot of work to get where I’m at, but I could have gone down a very different path. I got a second chance at life and now look where I’m at. I’d love to fight Trout or Gausha next, or any other title challenger that wants to fight, I’m ready. I pitched a shutout tonight and I’m prepared to be tested and prove I’m the best.”

The opening bout on FS1 featured Ahmed Elbiali (19-1, 16 KOs), an Egyptian-American who lives in Miami, Florida, scoring a technical knockout victory over Marlos Simões (13-2-2, 5 KOs) of Curitiba, Parana, Brazil who was unable to continue due to an injured jaw. Elbiali knocked Simões to the canvas and referee Keith Hughes stopped the contest 2:12 into the second frame.

“When he went down, I clipped him with a left hook,” said Elbiali. “I knew right away that I could hurt him, and that hook felt like it landed well. He was a tricky and really awkward opponent, but I just went for it and got the job done.

“I don’t really like calling out individual fighters, but I feel like I’m ready for a world title shot,” continued Elbiali. “We’re getting better with every fight and I’m ready.”