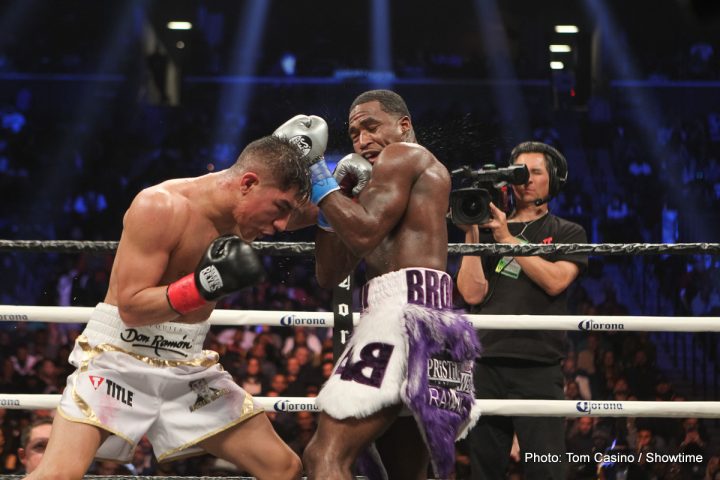 By Jeff Aranow: Adrien Broner (33-3-1, 24 KOs) once again failed to get a victory in an important fight last Saturday night in being held to a 12 round draw by former WBO welterweight champion Jessie Vargas (28-2-1, 10 KOs) at the Barclays Center in Brooklyn, New York.

The bout was televised on Showtime Championship Boxing. Neither fighter was down or hurt during the 12 round contest. The fight was match between two contrasting styles in which Vargas was focusing on high volume punching and targeting Broner’s body. For his part, Broner was throwing a lot of pot shots, and not picking his moments to go on the attack.

Rather than taking the high road and showing some class, Broner grumbled afterwards, insisting that he won the fight. The judges thought differently in scoring it 115-113 for Adrien, 114-114 and 114-114. This writer gave the fight to Vargas by a 116-112 score. I had Vargas winning the first 7 rounds, and then holding on in the last 5 rounds to get what arguably should have been a victory.

Broner, 28, was holding back and fighting in brief spurts, and his shots weren’t hard enough to give him the rounds after he was outworked 75 percent of each round. Broner was putting in the effort, and he looked like he was trying to steal the rounds in the last 30 seconds. Fighters with poor stamina frequently use that approach to try and win fights. Instead of them working hard for the full 3 minutes of each round, they only fight hard in the last 30 seconds to impress the judges that are more impressed with what they see in the final seconds of each round rather than in the entirety.

“He came to fight but at the end of the day, you all know I beat him. Point blank, period,” Broner said. ”I beat you’re a–. Look at his face. It looks like I beat him with what they beat Martin Luther King with man. (Rodney King?).”

Going by the condition of the two fighters’ faces, Broner looked less bruised up, but one reason for that is because Vargas was focusing on throwing a lot of body punches in the fight. His trainer former Mike ‘Bodysnatcher’ McCallum, who was known for being a vicious body puncher, has transformed Vargas’ game to have him throw more body shots. That’s what he was doing throughout the fight. Like always, Broner was throwing mainly head shots and not bothering throwing body shots.

It was a close fight that appeared to go in Vargas’ favor, but the judges gave Broner a lot of rounds that should have probably gone the other way.

The question is does Broner and the boxing public want to see a second fight between him and Vargas. There are better welterweights for Broner to fight, and obviously being held to a draw against Vargas suggests that he’s not ready to go to the next level. It might be better for Broner to move back down to his normal weight class to take on one of the top fighters at 140 like Regis Prograis or Jose Ramirez.

We saw how Garcia struggled against Sergey Lipinets in his last fight. Lipinets is a good fighter, but he’s not in the same league as Prograis or Ramirez. If Showtime is willing to televise a rematch with Broner and Vargas, then they should do it. I think there are better fighters to match against each of them. Vargas should be looking to fight WBA/WBC welterweight champion Keith ‘One Time’ Thurman or IBF champion Errol Spence Jr.

As I mentioned, Broner should move back down to 140 and find out what his destiny is. If Broner can’t cut it at 140 against the likes of Prograis or Ramirez, then he should find out now while he’s still young at 28. Broner could then try and move down to lightweight and see what he can do against Mikey Garcia, Robert Easter Jr., Jorge Linares, Vasyl Lomachenko or Ray Beltran.

Broner might be able to beat Beltran, Easter Jr. and Linares, but Mikey already beat him and Lomachenko would likely school him. As long as Broner is fine with being one of the best but not the best fighter at 135, I think he would have a better chance of being a world champion at this point in his career rather than him trying to mix it up with one of the top light welterweights like Prograis, Kiryl Relikh or Ramirez.

“I was connecting with rights. I got warmed up in the early portion of the fight. My trainer was a big help tonight,” Broner said. “I would love to fight Vargas again, but let’s go back to my town to do it.”

Broner was connecting with shots in the second half, but that was after he’d done nothing in the first 7 rounds. Broner gave the fight away in the part of the fight. The judges were very kind to Broner in giving him a draw, because that meant they gave him rounds he did very little and was outworked. It’s not surprising a popular fighter like Broner was given a draw in a fight that he appeared to lose. We see this all the time with popular guys. Who can forget the recent fight between middleweight champion Gennady Golovkin and Saul Canelo Alvarez. Golovkin fought well enough to win a clear decision, and yet he was given a 12 round draw by the judges.

Broner might be making a mistake by fighting Vargas a second time. Losing to someone like Spence, Shawn Porter or Keith Thurman wouldn’t hurt Broner’s career near as bad as it would if the judges get the scoring right in the Broner-Vargas rematch and give the victory to Vargas. More and more, Broner is starting to look like a gatekeeper type of fighter. Broner is starting to look like this era’s version of Emanuel Augustus, a fighter that was a gatekeeper during the 1990s.