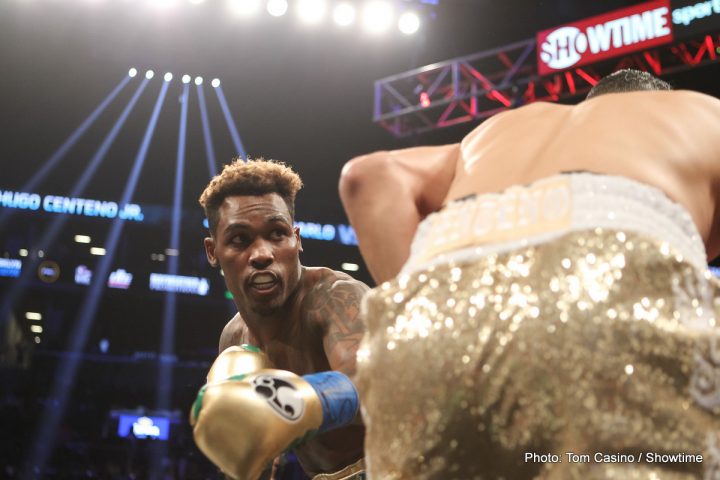 By Allan Fox: Jermall Charlo (27-0, 21 KOs) took care of business in getting Hugo Centeno Jr. (26-2, 14 KOs) out of the way in knocking him out in the 2nd round last Saturday night to put him in the position to challenge WBC middleweight champion Gennady Golovkin.

It doesn’t mean the fight will happen though. That depends on whether Golovkin wants to stick around 160 lb. division long enough to defend against Charlo and his other mandatory challengers. As of now, Charlo and Sergiy Derevyanchenko are GGG’s mandatory challengers for his WBC and IBF belts. Daniel Jacobs could become Golovkin’s WBA mandatory if he beats Maciej Sulecki this Saturday night.

In the fight of the night, Charlo beat Centeno Jr. by a 2nd round KO on Showtime last Saturday night at the Barclays Center in Brooklyn, New York.

“I would love for it to be Golovkin, because he’s on his way out, and I would get a chance to fight one of the best Hall of Fame fighters that ever did it,” Jermall said after his 2nd round knockout win over Centeno Jr. last Saturday night. ”A lot of people around the world want to see it too. The dude is amazing, so I want to get in there and test my talent too. I haven’t taken the easy route. Hugo was 26-1. I didn’t give you a chance to show you what I could do. I was going to shut his game plan down like I told you,” Charlo said.

It’s refreshing that Charlo is showing respect to Golovkin by saying good things about him rather than tearing him down. Jermall is considered the bigger, stronger and more talented of the Charlo twins. Jermall’s twin brother Jermell Charlo is the WBC junior middleweight champion, but he’s not the same puncher and he doesn’t have the same fearless mindset that Jermall has. The two brothers are very different.

Jermell is a very good fighter too, but he’s not nearly as powerful or as aggressive as Jermall. Even Jermall’s jab is much stronger than his brother’s. Jermall’s game is way ahead of Jermell. If Jermell moves up to middleweight, I don’t know if he can live in that weight class. Jermall can, and he might already be the best fighter in the weight class, although he’s obviously not going to get a chance to prove that for a long, long time if ever.

I doubt that Golovkin or Canelo Alvarez will ever face Jermall. Canelo arguably avoided him when they were both at 154, so I can’t see anything changing in that regard now that they’re both fighting at 160. Canelo’s future will be against beatable guys like Murata, Gary ‘Spike’ O’Sullivan and David Lemieux. I don’t think Canelo will ever fight Derevyanchenko, Jacobs and especially Charlo.

Charlo lined himself up for the Golovkin fight, but it still isn’t going to happen. All you need to do to know that Charlo won’t be fighting Golovkin anytime soon is to listen to GGG’s promoter Tom Loeffler. He’s got three names that he’s been mentioning, and they are as follows: Saul Canelo Alvarez, Ryota Murata and Billy Joe Saunders. Those three are on the horizon. Charlo’s name isn’t ever mentioned by Loeffler. He’s even talking about Golovkin moving up to super middleweight at some point to face WBO 168 lb. champion Gilberto ‘Zurdo’ Ramirez. Charlo is nowhere on the map right now as far as Golovkin is concerned.

Charlo, 27, is going to have to make a name for himself if he wants Loeffler to put Golovkin in with them, because as soon as GGG unifies the middleweight division, his titles are likely going to be vacated so that he can go after the best paying fights without being tied down to the small money – but difficult – fights against Charlo, Jacobs and Derevyanchenko.

Those fights will pay Golovkin no more than what he’ll get for his next fight against Vanes Martirosyan on May 5 on HBO World Championship Boxing at the StubHub Center in Carson, California. That’s not a big money fight, because Martirosyan doesn’t have a huge fan base. Charlo doesn’t either, but he can become a bigger name if he fights Jacobs. I doubt that’s going to happen though, because Jacobs’ promoter Eddie Hearn of Matchroom Boxing has continually said that Charlo is not in their future plans.

Hearn is under the delusion that he can get Jacobs the winner of the Canelo vs. Golovkin 2 rematch. That’s not going to happen, especially with Jacobs wasting time fighting the likes of Luis Arias and Maciej Sulecki. Those fights aren’t increasing his fan base, because those were fights picked out by Hearn to make Jacobs look good. If Hearn wanted to really improve Jacobs’ standing in boxing, he’d put him in with Charlo or Derevyanchenko, but he’s not doing that and I don’t think he ever will unless the fight is forced upon him.

”I hope I made the statement that I was supposed to make,” Charlo said about his 2nd round knockout win over Centeno Jr. last Saturday. ”I’m ready for the next level. They can’t keep putting people are 26-1 in there. I’m ready. It wasn’t easy. I just made it look easy.”

Charlo is getting a little ahead of himself. His win over Centeno Jr. was not as big as he thinks it was. Centeno Jr. had already been knocked out by Sulecki in 2016, so it’s not as if he beat someone well thought of like Jacobs, Canelo, Saunders or Derevyanchenko.

”I was promised in August,” Charlo said. ”I should be back in August. It’ll probably in my hometown. Maybe I’ll take another nice fight. I want to stay active. I want to deliver for the fans some nice fights,” said Charlo.

One of those fighters might be desperate enough to fight Charlo in August if they’re given a career high payday. For that to happen, Charlo is going to need to progress to main event on the Showtime Boxing cards. It’s kind of sad to see Charlo on the undercard of an arguably less talented fighter like Adrien Broner, who might not be even the 5th best fighter in the light welterweight division. Charlo should be headlining his own fights rather than fighting on the undercard of fading fighters like Broner, who left his prime behind 2,000 yesterday’s ago.