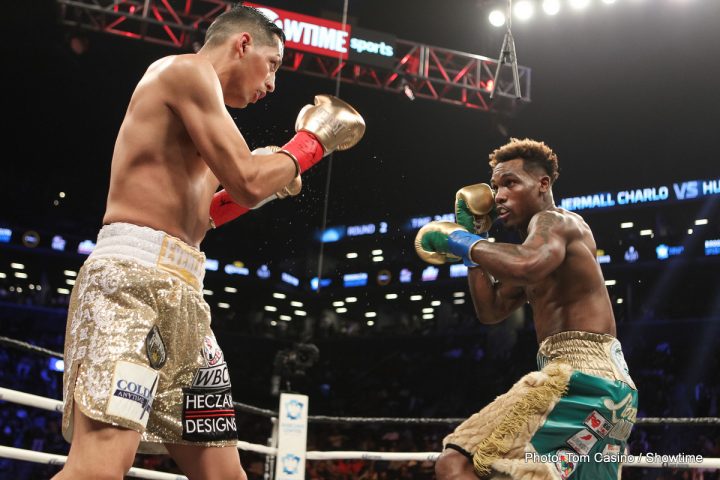 By Dan Ambrose: Jermall Charlo (27-0, 21 KOs) took advantage of the spotlight being on him last Saturday night by calling out IBF/IBO/WBA/WBC middleweight champion Gennady ‘GGG’ Golovkin (37-0-1, 33 KOs) following his 2nd round knockout win over Hugo Centeno Jr. (26-2, 14 KOs) at the Barclays Center in Brooklyn, New York.

With Showtime Boxing televising the fight, the 27-year-old Charlo sent a message to GGG with his brutal 2nd round KO of Centeno Jr. to become the Kazakhstan fighters’ WBC mandatory challenger.

The way Charlo dispatched Centeno Jr. was impressive to see. Charlo used his speed and power to tag Centeno Jr. with three heavy shots on the inside in the 2nd round that put him down on the canvas. Centeno Jr. made the mistake of trying to attack Charlo by throwing combinations.

Charlo was already Golovkin’s WBC mandatory challenger before the fight, but the World Boxing Council had him fight for the interim WBC 160 lb. title in an odd move by the sanctioning body. It would have been better for the WBC to remove Saul Canelo Alvarez as the other WBC mandatory to GGG due to him not being enrolled in the WBC’s ‘Clean Drug’ program. The WBC could then order Golovkin to face Charlo, and that fight would happen later this year rather than the Canelo-Golovkin 2 rematch.

“I’m a two-time world champion. Bring on ‘GGG.’ I want that fight. I’m 27-0 with 21 knockouts. Everybody sees it. What more can I say?” Jermall said after the fight. Everybody has always avoided me and from now on, this is how it’s going to be. You see what you get.”

Golovkin could face Charlo next year if he’s not tied down with a third fight with Canelo and a unification fight with WBO middleweight champion Billy Joe Saunders. The problem that Charlo has is Golovkin can make a lot more money fighting Canelo in a third fight, as well as the winner of the World Boxing Super Series tournament between George Groves and Callum Smith. WBC mandatory challenger Charlo doesn’t bring much money to the table for Golovkin, and neither does IBF mandatory Sergiy Derevtanchenko. Further, former WBA World middleweight champion Daniel Jacobs (33-2, 29 KOs) could become Golovkins World Boxing Association 160lb. mandatory challenger this Saturday night on April 8 when he faces Maciej Sulecki (26-0, 10 KOs) in their fight on Showtime at the Barclays Center in Brooklyn, New York.

Golovkin will be soon looking at these three dangerous contenders as his mandatory challengers: Jacobs, Charlo and Derevyanchenko. I’d be very surprised if Golovkin faces any of them, because once he unifies the middleweight division, there won’t be any point in defending the belts against any of those fighters in low money fights. Those are not PPV matches for Golovkin, none of them. Golovkin can make better money fighting Canelo 3 or 4 times, and then Saunders and then winner of the Groves vs. Smith fight. There’s also WBO super middleweight champion Gilberto ‘Zurdo’ Ramirez that Top Rank promoter Bob Arum wants to match against Golovkin. You would have to believe that a fight between Golovkin and Ramirez would easily top a title defense for GGG against Charlo, Jacobs or Derevyanchenko.

Centeno Jr. had already been knocked out in the past by Maciej Sulecki in a 10th round knockout in June 2016. Sulecki has a 38% KO percentage. The fact that Centeno Jr. was knocked out by a light hitter like Sulecki suggests that his chin was never good to begin with. What Charlo accomplished in beating Centeno Jr. by a knockout isn’t as impressive as one would think given his earlier knockout by the light hitting Polish fighter Sulecki just two years ago.

Even though Charlo looked good beating the 27-year-old Centeno Jr. last night in 2 rounds, nothing changed in regard to Golovkin. Charlo was the WBC mandatory coming into the fight with Centeno Jr. and his position hasn’t improved with the victory. Golovkin won’t be fighting Charlo after he makes a voluntary defense against Vanes Martirosyan (36-3-1, 21 KOs) on May 5th at the StubHub Center in Carson, California.

Golovkin will be facing Canelo on September 15 unless something happens that prevents that fight from taking place. According to Dan Rafael, Canelo and Golovkin may need to renegotiate the terms for their second fight. You would think that GGG will get a better deal due to Canelo testing positive twice for the banned substance clenbuterol, which cost Golovkin a big money payday on May 5. Charlo is going to have to wait his turn and hope that he can get the fight with winner of the Canelo-GGG fight next year. If Canelo beats Golovkin, it’s very likely that he’ll vacate the WBC title rather than defend it against Charlo. If the WBC pushes Canelo, which wouldn’t be smart for them to do, he’ll probably vacate like he did in 2016 after the WBC ordered him to fight Golovkin.

What Charlo needs to do is stay busy with his career while he waits for the smoke to clear for the Golovkin vs. Canelo 2 rematch. One fight that is potentially out there for Charlo is Jacobs, who said that if he can’t get the winner of the Canelo vs. Golovkin 2 fight, then he wants to face Jermall. If Jacobs was serious about what he said, then a fight between him and Charlo would be a exciting match, and it would give the two of them the chance to further strengthen their position as the next star in the 160 lb. weight class. Right now, Charlo and Jacobs need a big win to increase their popularity, because the guys they’ve been beating lately haven’t been big enough names to do help their careers substantially.

Centeno Jr. made a mistake in trying to mix it up with Charlo instead of boxing him and waiting until the second half of the contest before trying to slug with him. Charlo faded in the second half of his fight with Austin Trout in 2016, and he had problems. However, Trout wasn’t trying to punch with Charlo right off the bat the way Centeno Jr. foolishly did in the 2nd round. Charlo is vulnerable if you take him deep into the fight before going after him. Centeno Jr. used the wrong game plan and he paid for it.

“I thought I started off pretty well. I wanted to go out on my shield, but it wasn’t my day,” Centeno said. “He caught me and got the knockout. I was trying to work my jab. I thought I got him with a couple good shots, but I lingered too long in the pocket and I didn’t get out in time.” 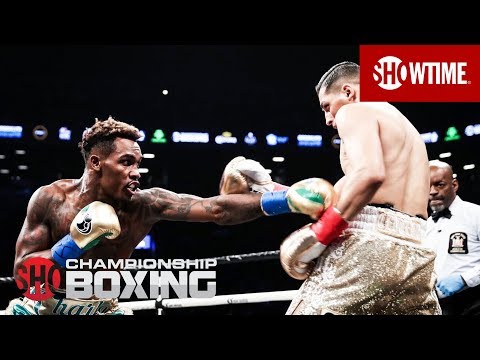