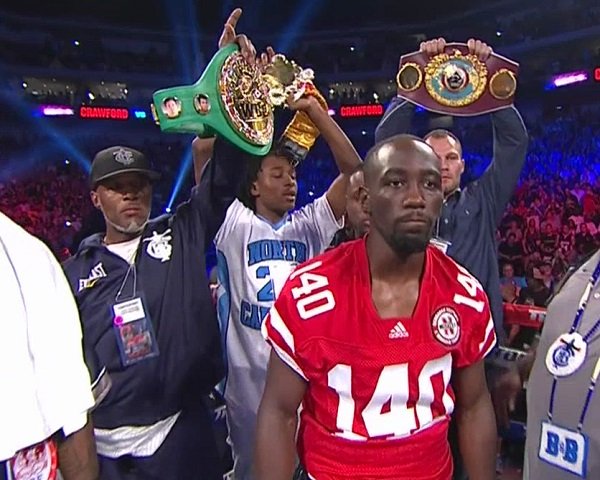 By Chris Williams: Terence Crawford (32-0, 23 KOs) will be having a meeting this Saturday with his promoter Bob Arum of Top Rank for him to finalize his title shot against WBO welterweight champion Jeff Horn (18-0-1, 12 KOs) for April 14 on ESPN at Madison Square Garden, New York.

Crawford will be meeting with his 86-year-old promoter Arum while attending the Gilberto ‘Zurdo’ Ramirez vs. Habib Ahmed and Jerwin Ancajas vs. Israel Gonzalez card this Saturday night on February 3 at the Bank of America Card in Corpus Christi, Texas. The card will be televised on ESPN.

Arum was able to get Crawford a world title shot right away at 147 against Jeff Horn without him even having to fight anyone at welterweight to earn the spot. The World Boxing Organization installed Crawford as the No.1 after he vacated his IBF, WBA, WBC and WBO 140 lb. titles. Top Rank fighters hold 6 of the WBO’s world title, and they’re about to win a 7th after Raymundo Beltran and Paulus Moses compete for the vacant WBO lightweight title.

Horn, 29, won the WBO welterweight title last year in July in beating Manny Pacquiao by a 12 round unanimous decision in Brisbane, Australia. Arum had hoped to stage a rematch between Pacquiao and Horn in Australia for December, but fight wasn’t doable due to the Filipino star’s busy schedule in the Philippines.

Pacquiao is a senator in the Philippines, and the job makes it difficult for him to schedule fights. Horn will have to fight Crawford in the U.S in New York. It’s unknown why Pacquiao had to fight Horn in Australia but not Crawford. It would seem like things are backwards. Pacquiao is still way more popular than Crawford, and yet he had to fight Horn in Australia. It would seem like Crawford should be the one fighting Horn in Australia, and Pacquiao fighting him in New York. That was a strange move by Arum to have his only big money maker Pacquiao fighting Horn on his turf rather than in the U.S.

There’s not a lot of interest in the Crawford-Horn fight unfortunately. Horn didn’t look good against Pacquiao in roughing him up for 12 rounds and winning a controversial decision. Horn is not seen in the same light as the other welterweight champions Keith Thurman and Errol Spence Jr. If Crawford beats Horn, at least he’ll be recognized as one of the better champions in the division along with Spence and Thurman. However, a fight between Crawford and Thurman and Spence is likely a long ways away. There are major obstacles that block Crawford fighting those two champions. Crawford is with Top Rank, and he fights on ESPN. Spence and Thurman both fight on Showtime and are with Al Haymon. Those things right there could prevent Crawford from ever fighting those 2. It’s likely that the only way Crawford ever faces Thurman and Spence is if he becomes a star. Given the way that Crawford has been matched thus far in the last 5 years, it would seem unlikely that he’ll ever reach that point. Crawford is ranked in the pound for pound list with Ring Magazine, but unfortunately that does not translate to popularity with the casual boxing fans. Crawford is still not a popular fighter in the Saul Canelo Alvarez, Gennady Golovkin and Floyd Mayweather Jr. mode.

Manny Pacquiao vs. Mike Alvarado in the works for April.14 »