Manny Pacquiao vs. Mike Alvarado in the works for April.14 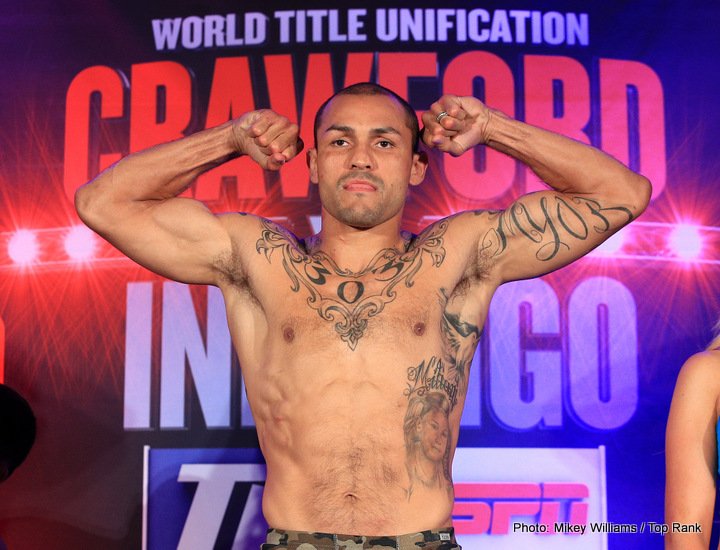 By Chris Williams: A fight between Manny Pacquiao and Mike Alvarado is reportedly being considered for the co-feature on the Jeff Horn vs. Terence Crawford card on ESPN at Madison Square Garden in New York.

According to Ring TV, the card could be televised on ESPN pay-per-view rather than on regular cable. it would be an odd fight for pay-per-view, because Pacquiao would be facing the arguably over-the-hill 37-year-old Alvarado in a tune-up fight, and Crawford (32-0, 23 KOs), who isn’t a star, would be facing what a lot of boxing fans see as a paper champion in WBO welterweight belt holder Jeff Horn (18-0-1, 12 KOs). It would be interesting to see how many pay-per-view buys this fight card will generate. Putting a fight card like this on PPV would seem like a disaster waiting to happen.

Alvarado’s name was mentioned s as opponent for Pacquiao last January, but Top Rank president Carl Moretti denied the possibility of that fight happening at the time. But it looks like the rumors were true, as Top Rank boss Bob Arum isn’t denying that Alvarado (38-4, 26 KOs) is a possibility for the 39-year-old Pacquiao to be fighting on April 14th.

“Yeah, [Alvarado] is a possibility,” Arum said RingTV.com. “I’ve spoken to Manny and we’re working on getting him back in the ring in the spring.”

Alvarado is one of Arum’s Top Rank stable fighters, and he fights in the welterweight division. Given that Arum likes to put together a lot of in house fights involving his Top Rank stable fighters competing against each other rather than fighters from other promotional stables, it makes a fight between Pacquiao and Alvarado a logical move by the promoter. It’s obviously not a great fight or one that the boxing public would be interested in, but the fans weren’t interested in some of the recent guys that Arum fed to Pacquiao in Jeff Horn, Jessie Vargas and Tim Bradley. Those were Pacquiao’s last 3 fights since his one-sided 12 round decision loss to Floyd Mayweather Jr. in May 2015.

Alvarado was briefly a world champion in holding the WBO light welterweight title from October 1 to October 19, 2013. Alvarado held the WBO 140 lb. title for 19 days before losing it to Ruslan Provodnikov by a 12th round stoppage on October 19th, 2013. It’s been all downhill since then for the Colorado native Alvarado with him losing to Juan Manuel Marquez and Brandon Rios. Those were 3 straight defeats for Alvarado between 2013 and 2015. Alvarado has won his last 4 fights since 2016, beating these low level fighters:

Alvarado did not look good in his last fight against 40-year-old journeyman Sidney Siqueira (26-13-1, 17 KOs0 before eventually stopping him in the 4th round. There was a point in the fight where it looked as if Alvarado was going to lose to Siqueira. Alvarado’s power bailed him out, and he eventually got the stoppage win. It was awful to see how diminished Alvarado looked compared to his best years as a pro. He looked nothing like the fighter that beat Brandon Rios in their second fight in March 2013. Alvarado hasn’t won a big fight since the victory over Rios. Unfortunately for Alvarado, that fight is his signature career win for him as a 14-year pro.

If Top Rank promoter Bob Arum hooks Alvarado up with a fight with Pacquiao on April 14th, it would be a real gift for him, because it would be a decent payday for him late in his career. Of course, it won’t be the kind of money that Alvarado would have made had he fought Pacquiao when he was still a pay-per-view attraction, and being matched against fighters that the boxing fans wanted to see him fighting. Pacquiao is no longer a PPV attraction since his loss to Mayweather. You can argue that Pacquiao would have been able to turn his career around quickly after his loss to Mayweather if he’d been matched against talented fighters that the boxing fans wanted to see him fighting like Keith Thurman, Errol Spence, Amir Khan, Shawn Porter and Danny Garcia. Those guys aren’t with Top Rank, so the fights didn’t get made. Arum instead matched Pacquiao against his Top Rank stable fighters Jessie Vargas, Tim Bradley and Jeff Horn. The fans weren’t interested in seeing Pacquiao fight those guys like they’d been in seeing him fight the likes of Juan Manuel Marquez, Antonio Margarito, Mayweather, Miguel Cotto, Oscar De La Hoya and Shane Mosley.

Pacquiao being relegated by Top Rank to fighting on an undercard of Horn vs. Crawford has got to be viewed as a huge disappointment for the career of the former 8 division world champion. It was bad enough that Pacquiao had to fight Horn in his own hometown of Brisbane, Australia last July, but now to be potentially fighting as an undercard of Crawford-Horn, it’s pretty sad. Pacquiao would clearly be the most popular fighter on that card, but for him to be fight in the co-feature, it’s sad to see. I don’t know how Pacquiao would ever agree to that.

It’s debatable whether Pacquiao will be able to gain a lot of respect from the boxing fans if he beats Alvarado in style. Pacquiao really doesn’t need lower level 2nd tier opponents like Alvarado at this point in his career. Pacquiao isn’t coming off an injury, so he doesn’t need to journeyman level opponent like Alvarado as an opponent. If the idea is for Pacquiao o look good in beating Alvarado so it’ll convince the casual boxing fans that he’s turned his career around, I think it’s a mistake. The fans aren’t going to buy into Pacquiao being back to where he was just because he destroys an over-the-hill fighter like Alvarado. If that’s the idea behind Arum matching Pacquiao against Alvarado, I think it’ll be a failure. Alvarado is likely getting the fight against Pacquiao mainly because he’s one of Arum’s few fighters in his Top Rank stable that fights in the welterweight division. Since Arum has to match Pacquiao against someone for his April 14th fight, Alvarado may get the fight because he’s at that weight and he’s a Top Rank fighter. In the best possible world, Arum would work with one of the other promoters like Matchroom Sport to put together a fight between Pacquiao and Amir Khan for June or July. That would be a good fight between two shot fighters.

Pacquiao fighting on the undercard of Horn vs. Crawford is a clear sign that Arum is going to try and match the Filipino up with Crawford if he wins the WBO welterweight title. I don’t know if Pacquiao is on board with that idea, but if he agrees to fight on the undercard of the Horn-Crawford fight, then it’s academic at that point. Pacquiao will be fighting the Horn-Crawford winner, which will likely be Crawford. Pacquiao would be playing the role of the stepping stone to make Crawford a pay-per-view star like Oscar De La Hoya did in his fights with Pacquiao and Floyd Mayweather Jr. I don’t think it’s going to work out the same way though. De La Hoya was still massively popular when he fought Pacquiao and Mayweather in 2008 and 2007. Pacquiao is not popular like that anymore. He’s not fighting often, and he’s not being matched by Top Rank against fighters that the boxing public wants to see him fight. De La Hoya stayed popular until the end of his career because he was fighting the best like Mayweather, Pacquiao and Bernard Hopkins. Pacquiao’s popularity has disappeared because Arum has kept him in house fighting non-popular Top Rank fighters Jessie Vargas, Jeff Horn and Tim Bradley. There was a time where Bradley was a popular fighter, but he wasn’t by the time Pacquiao fought him for a third time, which the fans didn’t want to see.

It’s got to be tough for Pacquiao. If he chooses to take one for the team to help out Arum and Top Rank by agreeing to fight Crawford at the end of his career. It seems like a bad way to go for Pacquiao after all those years of being the No.1 money fighter for Top Rank to end up getting put in with Crawford. You’d like to see Pacquiao ending his career on a positive note fighting someone he can potentially beat like Amir Khan or Danny Garcia. That would be great for Pacquiao, because he at least would have a chance of defeating those guys.