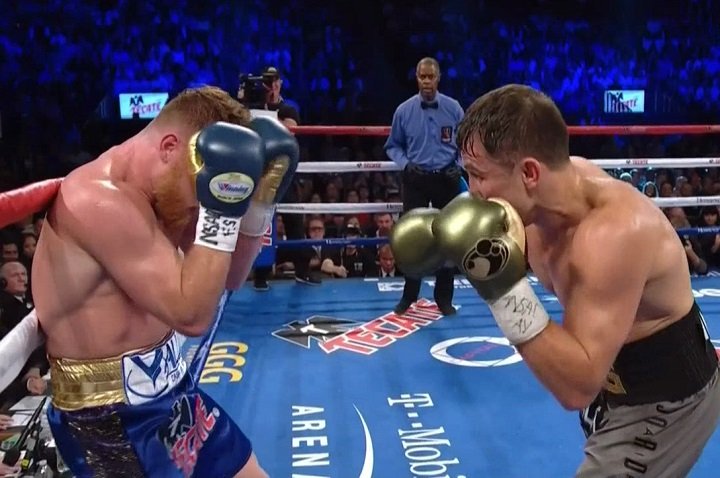 By Dan Ambrose: Super featherweight prospect Ryan Garcia says middleweight champion Gennady ‘GGG’ Golovkin (37-0-1, 33 KOs) can’t change how he fights, and he sees Saul ‘Canelo’ Alvarez (49-1-2, 34 KOs) as having learned how to beat him from their last fight on September 16 in Las Vegas, Nevada. The 19-year-old Garcia says the only thing Canelo has to do is get in good condition to fight 12 hard rounds for him to beat Golovkin, because he doubts that he’ll be able to knockout him out.

Canelo and GGG fought to a 12 round draw in their fight last September on HBO pay-per-view. Canelo didn’t fight like he’d learned how to beat Golovkin. Canelo fought like he didn’t have the stamina or the reach to win the fight. Canelo did fight well in the first minute of rounds 9, 10 and 11. Canelo faded after the first minute of those rounds, and spent the rest of the time retreating, holding and looking to land rare pot shots. Golovkin was pouring it on nonstop, and Canelo looked exhausted.

“I’m going to go with Canelo,” Ryan Garcia said to Villian Fy. ”I think he learned what to do and how to beat Triple G. He had a rough start the first time. I think this time he’ll take it. He [Golovkin] can’t change. He fights the same. He comes forward, he controls distance great with his jab, and he looks to land the hook or the overhand right and everybody sees it. So he’s not going to come with anything different,” Garcia said.

Canelo is going to need to fix his stamina for him not to get beaten by Golovkin. The conditioning issues that Canelo showed in the Golovkin fight last September didn’t just pop up out of the blue. These are things that have been there since Canelo turned pro in 2005. If you look at Canelo’s earliest fights, he’s always gotten winded after fighting hard for a minute, and then needing to rest on the ropes. Ryan Garcia thinks Canelo can change. He obviously CAN’T change. Garcia says Golovkin “can’t change.” The reality is Canelo is the one that can’t change, because if he could, he would have done it already.

Canelo is in his late 20s now, and the stamina problems that he showed against Triple G are going to be there for the remainder of his career. If anything, I expect Canelo’s stamina issues to get worse over time. Canelo can certainly help himself by losing some weight and coming in lighter for the Golovkin rematch, but if he does that, he’ll be out-sized by the Kazakhstan fighter. Canelo is stuck. He has to keep the size that he added for the last fight otherwise he’ll get steamrolled by Golovkin. But if Canelo stays big, he’s going to run out of gas in each round like he did last time, and he’ll lose the fight or appear to lose it. Maybe Canelo will get lucky again with the judges scoring the rounds based on Canelo’s work in the first minute of the rounds, and ignoring Golovkin’s work in dominating the last 2 minutes. That didn’t go over well with the boxing fans in the previous Canelo-Golovkin fight. They felt that Golovkin should have been given the win because he outworked a tired looking Canelo in each round.

Golovkin doesn’t need to change for the rematch other than to apply more pressure, and not start slowly in rounds 1 and 2 like he did last time he fought Canelo. Golovkin’s trainer Abel Sanchez needs to have a conversation with the referee before the fight to let him know to control Canelo’s habit of turning his back to GGG when he throws to the body, because Canelo was doing that during the fight to keep from getting hit to the body. Garcia is wrong about Canelo having a rough time at the start of the fight. Canelo fought well in the first 2 rounds, but after that, he tired out and was exhausted from rounds 3 to 11. Canelo didn’t have a rough start of the Golovkin fight last September. Canelo had rough rounds 3 through 11, and that’s not a start. That’s the major portion of the fight.

Garcia’s comments about Canelo having “learned” how to defeat Golovkin has to do more about the forward pressure Canelo applied in the last 3 rounds of the fight. The judges gave Canelo the last 3 rounds. In watching the fight on replay today, Canelo didn’t do enough to win more than 1 of those rounds, and that was the 12th. Canelo did a little bit better than Golovkin in round 12, but it was far from easy. It didn’t look like a situation where Canelo had “learned” how to beat Golovkin, as the young 19-year-old Ryan Garcia states. It looked more like Canelo toughed it out to barely get the better of Golovkin round 12, but it was very close. The only rounds that Canelo did well enough to win was rounds 1 and 2. That’s it. Canelo was exhausted and retreating in rounds 3, 4, 5, 6, 7, 8, 9, 10 and 11.

Golovkin got the better of Canelo in those rounds by doing more than him, and fighting hard the entire 3 minutes of the rounds instead of just the 1st minute. The referee for the Canelo-GGG fight last September, Kenny Bayless, warned Golovkin for hitting Canelo in the back in rounds 4 and 11. Canelo turned his back to Golovkin to avoid those body shots, causing Bayless to warn the Kazakhstan fighter. Bayless made a mistake of warning Golovkin instead of Canelo, who was using an old trick of turning his back to his opponent in order to try and get the referee to step in to warn Golovkin. Turning your back on your opponent when they throw body shots is a tactic some fighters use to keep them from targeting their body. They obviously know that referees that aren’t paying attention to the action will give needless warnings to the fighters that land the shots. Bayless failed to see that Canelo was purposefully turning his back to Golovkin when he’d throw body shots so that he could get the referee to step in and either warn him or penalize him for throwing a shot to his back. It’s a smart trick by Canelo, but Bayless did a poor job of spotting the tactic that Canelo was using and giving him a stern warning to stop turning his back each time Golovkin would throw a body shot. The judging and the officiating for the Canelo vs. Golovkin fight left a lot to be desired. Most boxing fans only remember the 2 bad scores by the judges Adelaide Byrd and Don Trella, but they don’t remember the poor job the referee Bayless did in controlling Canelo’s tactic of turning his back to Golovkin when he’d throw to the body. Canelo does this all the time in his fights to keep his opponents from hitting him to the body. It looks as if Bayless didn’t do his homework well to see the tricks that Canelo uses to keep from getting his to the body. Finding good referees is hard work.

”That pressure is a [expletive],” Garcia said about Golovkin’s pressure style. “It comes at you nonstop. So, Canelo has just got to condition himself for 12 hard rounds and that’s it. You see Triple G is not going to go nowhere. He has a chin,” Garcia said.

Unless Golovkin gets old overnight, we might see the same type of fight with Canelo stuck on the ropes, not pressing the attack and looking to hold and run.

“It’s a high possibility, the pay-per-view portion,”Garcia said about him fighting on the Canelo vs. GGG 2 card.

Ryan Garcia is a well-respected prospect, but I’d be surprised if he ends up on the televised portion of the Canelo vs. Golovkin 2 card. Garcia hasn’t fought any good opponents yet, and there are still a lot of questions whether this guy will work out or not as a pro. He’s prospect at this point. It would be better for Golden Boy Promotions to put some top contenders on the undercard of the Canelo-Golovkin rematch rather than a prospect that may or may not ever work out. Garcia is still a kid at 19, and you can’t throw him in the ring with one of the talented top fighters at super featherweight like Miguel Berchelt, Vasyl Lomachenko, Alberto Machado, Gervonta Davis or Francisco Vargas and expect him to compete. 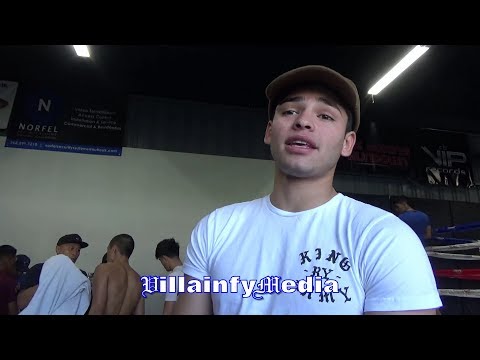