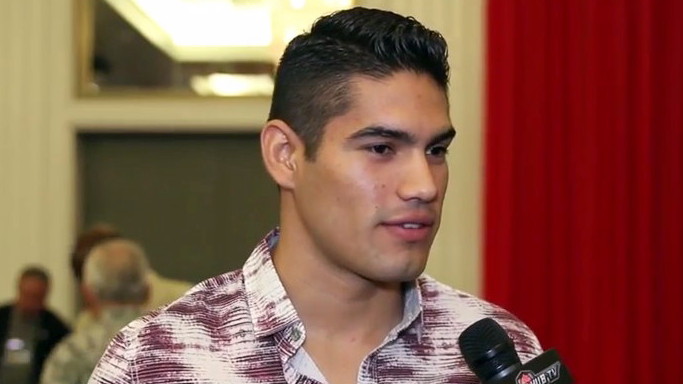 By Harry Hogg: Super middleweight champion Gilberto “Zurdo” Ramirez defends his WBO belt on Saturday night against the undefeated and very much unknown Ghanaian Habib Ahmed at the American Bank Center in Texas.

The bout will headline the first Top Rank card of 2018, and the Mexican will be looking to start the year off with a bang as he continues to line up a unification showdown with the winner of the Super Six tournament later this year.

Ramirez (36-0, 24 KOs) won the WBO strap back in April 2016, where he dominated veteran Arthur Abraham on the way to a shut out decision. Since then he has successfully defended the title twice against Max Bursak and more recently Jesse Hart in what was a hard-fought victory over 12 brutal rounds.

Standing in the Mexican’s way of a third successful defence is the relatively unknown Ahmed (26-0-1, 18 KOs). The man who is ranked #6 in the WBO rankings, will be fighting outside his native Ghana for the first time.

And with 18 knockouts, he carries a respectable power. But has fought nobody of any real note and understandably heads into Saturday night’s bout as a hefty underdog.

Ramirez however, will know full well he will need to remain fully focused in order to get the expected victory. You only have to point to what happened to fellow divisional rival James DeGale late last year, When the Brit succumbed to shock defeat to American Caleb Truax.

Ramirez cannot afford to suffer the same fate, considering what lies on the horizon later this year. The likes of George Groves, Eubank Jr, David Benavidez and Tyron Zeuge will no doubt be interested spectators from afar.

As for the fight itself, it’s difficult to see anything other than a one-sided victory for Ramirez. The 26-year-old champion holds a far superior height and reach advantage for starters. Ahmed carries power and has plenty of heart, he knows he has nothing to lose and will try and take the fight to the undefeated champion. But ultimately, boxing is about levels and Ahmed lacks the movement and big fight experience to pull off what would be a major upset.

Ancajas stopped Jamie Conlan in the sixth round last time out in Belfast back in November. Victory for 26-year-old would push him further in line for unification bouts with pound for pound stars Naoya Inoue and Srisaket Sor Rungvisai.