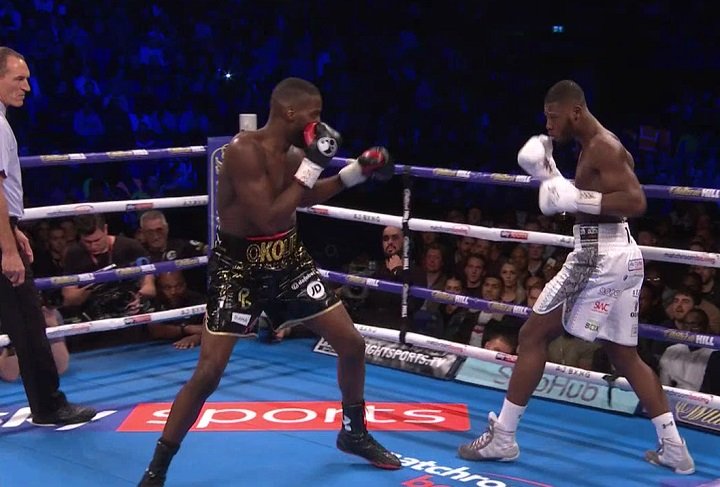 By Scott Gilfoid: In a one-sided contest, unbeaten cruiserweight Lawrence Okolie (8-0, 6 KOs) defeated Isaac Chamberlain (9-1, 4 KOs) by a 10 round unanimous decision to capture the vacant WBA Continental Cruiserweight Title in their fight on Sky Sports on Saturday night at the O2 Arena in London, UK. The 2016 Olympian Okolie dropped the 23-year-old Chamberlain twice in the fight in putting him down in rounds 1 and 6.

With Okolie winning the WBA Continental cruiserweight title, it looks like he’s being fast tracked for a world title shot for the WBA belt. That’s probably not a good idea. Okolie doesn’t have the kind of talent to compete with the likes of Murat Gassiev.

The knockdown in the 1st round was bogus. Okolie missed a right hand and then bumped into Chamberlain, knocking him to the canvas. The referee still counted it as a knockdown. Luckily, the botched call didn’t affect the overall results of the fight, as Chamberlain still would have lost by a wide score even if the referee had made a correct ruling on the 1st round knockdown.

Okolie did appear to hit Chamberlain with his right knee while he was falling from the bump. The knockdown in round 6th was a legitimate one for Okolie. He landed a right hand to the head of Chamberlain when he was in the process of throwing a punch. The shot knocked Chamberlain off balance and he reached down with both gloves and touched the canvas to keep from falling. It was a balance thing. Chamberlain was not hurt by the shot.

The judges scored the fight 98-89, 96-90 and 97-89. Boxing News 24 scored it for Okolie by a 98-89 score. Chamberlain was way too green to be inside the ring with a fighter like Okolie at this point of his career. If this fight had taken place 5 years into the future, then maybe Chamberlain would be a little more developed by that point to compete with Okolie, but definitely not now. The positive from tonight’s fight was Okolie showed good punching power at times. When he was able to get full extension on his long shots, he was able to land with excellent power. The negative to take away from the fight was awkward and easy to hit Okolie was. He’s all arms and legs, and looked clumsy in the ring tonight. But then again, Okolie always looks this way, it was nothing new from him. He’s just not a particularly well-coordinated fighter.

It was a mismatch. Chamberlain didn’t have the boxing skills to be competitive in the fight. Okolie, 25, looked didn’t look that good either. Compared to the top fighters at cruiserweight like Murat Gassiev, Oleksandr Usyk, Yunier Dorticos and Denis Lebedev, he’s not even close to being in the same class as those guys.

The lanky 6’5” Okolie looked sloppy throughout the fight, missing wild punches, and leaving himself open to counter shots. If Chamberlain had an ounce of talent, he would have destroyed Okolie tonight. I’m not sure what Matchroom Sport promoter Eddie Hearn is going to do with Okolie, because the guy is so far behind the top fighters in the cruiserweight division. I mean, if Hearn is able to wrangle a deal for Okolie to fight for a title against the likes of Usyk or Gassiev, he’s likely going to be mowed down quickly. I think Okolie is a fine domestic level fighter, but you can’t throw this guy into the ring with the true talents at cruiserweight like Usyk, Gassiev, Mairis Briedis, Dorticos or Lebedev without him getting royally thrashed.

In other results on the card, undefeated junior middleweight Ted Cheeseman (13-0, 8 KOs) stayed unbeaten with a 10 round unanimous decision over American journeyman Carson Jones (40-13-2, 30 KOs). The judges scored the fight 99-91, 99-91 and 100-89. The fight was more competitive than the scores would have you believe. Jones was nailing Cheeseman with right hands all night long. Cheeseman did enough to win the fight, but it wasn’t impressive stuff. You can’t take Cheeseman and put him in with the top junior middleweights like Erislandy Lara, Jarrett Hurd and Jermell Charlo and expect him to come out of the fight with a victory. Cheeseman is not that kind of fighter. Like with Chamberlain and Okolie, Cheeseman is domestic level.

Other results on tonight’s card: