David Benavidez to fight in July 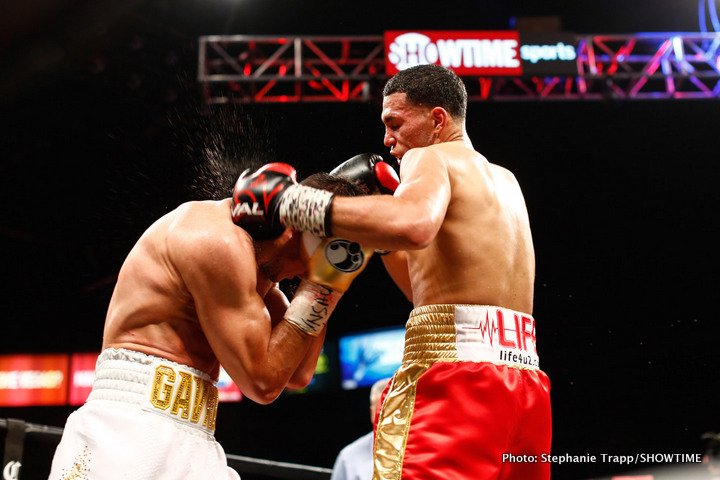 The 21-year-old Benavidez punished Gavril for 12 rounds in winning by the scores 120-108, 120-108 and 119-109. It wasn’t nearly as competitive as their previous fight last September. A lot of credit has to be given to Gavril for being able to take the kinds of shots that Benavidez was landing in the fight.

Benavidez, 6’2”, was landing some monstrous punches in the first 9 rounds before he backed off and begin boxing due to his injured right hand.

Benavidez will next be fighting in July against an opponent yet to be determined, according to ESPN. With Benavidez fighting in July, it rules out him taking the place of George Groves in the finals of the World Boxing Super Series tournament. There was speculation that if Groves is unable to compete in the finals due to the shoulder injury he sustained in his last fight against Chris Eubank Jr. last weekend, then Benavidez one of the other super middleweight champions could be asked to step in to replace him.

Benavidez’s right hand was swollen after his fight with Gavril last Saturday. An MRI was conducted and there were no broken bones. His hand was just bruised. The win for Benavidez was his first defense of his World Boxing Council 168 lb. strap that he won last September against Gavril.

If not for the WBSS tournament, Benavidez would have fought Callum Smith for the vacant WBC super middleweight title last September instead of Gavril. Smith took part in the WBSS tournament, and he has a chance to win it if he can beat Nieky Holzken in his semifinals match this Saturday and then beat Groves – or whoever replaces him – in the finals. Benavidez could face the eventual winner of the World Boxing Super series tournament at some point.

It’s not likely that Benavidez will get an immediate shot at the winner, however, because that fighter will be in demand and will have an opportunity to pick and choose their next opponent after the tournament ends. But at some point, Benavidez could get a shot at the winner or perhaps even the loser. A fight against the 6’3” Callum Smith would be an excellent match-up for the 21-year-old Benavidez to show that he’s got the talent to compete with and beat the best fighters in the 168 lb. division.

Gavril wasn’t a good enough opponent for Benavidez to get a lot of attention in the boxing world. It’s going to take a victory over Smith, Groves or Gilberto ‘Zurdo’ Ramirez for Benavidez to make a statement in the division.