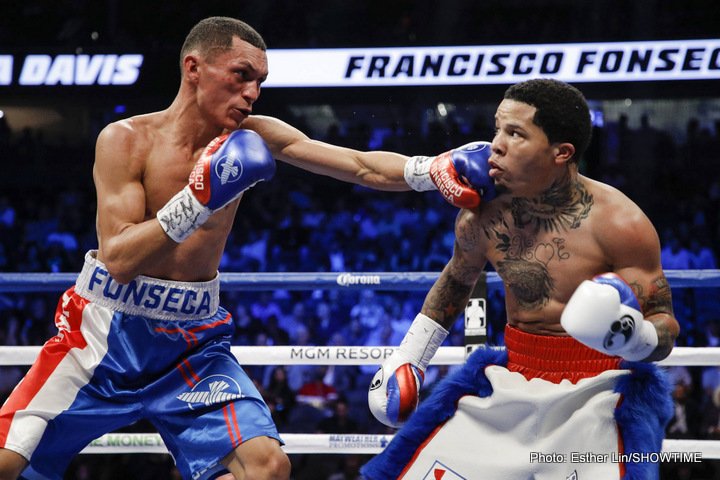 Dan Rafael is reporting that the World Boxing Association will be creating the WBA World featherweight belt for the 23-year-old Davis and Cuellar to fight over.

Davis was supposed to be fighting former featherweight world champion Billy Dib (43-4, 24 KOs), but nothing has come of that fight.

The 31-year-old Cuellar hasn’t fought since losing his WBA ‘regular’ featherweight title to Abner Mares by a 12 round split decision on December 10, 2016 in Los Angeles, California. It’s unclear why the Argentinian Cuellar decided to take all of 2017 off and the first 2 months of 2018. The activity might hurt Cuellar when/if he gets inside the ring with Davis. It’s a fight that Cuellar would stand a good chance of winning if he’s in the top of his game. Being out of the ring for over a year after his loss to Mares won’t have helped Cuellar’s boxing skills any.

Baltimore, Maryland native Davis lost his IBF World 130 lb. title last August after failing to make weight for his voluntary title defense against Francisco Fonseca. Davis won the fight easily in defeating Fonseca by an 8th round knockout. Davis has been out of the ring ever since that fight.

Mayweather Promotions CEO Leonard Ellerbe has been asked if he’d be interested in matching Davis against WBO super featherweight champion Vasyl Lomachenko, but he’s rejected the idea of putting that fight together.

Davis vs. Cuellar is a good fight on paper. Cuellar can punch, and he seems to have a good chin. Davis might have to tough it out for him to beat Cuellar. Abner Mares was unable to knockout Cuellar in his close 12 round decision win in December 2016. Mares did knock Cuellar down in round 11, but he wasn’t able to finish him off. Davis is a bigger puncher than Mares, and a he’s a lot younger. It’s possible that Davis might have enough punching power to get Cuellar out of there.

The WBA was said to be in the process of reducing the amount of world titles they have in each weight class, but it looks like they’re having second thoughts. That’s a good thing for Davis and Cuellar, because it gives them the opportunity to fight for a world title. If not for the WBA re-creating the WBA secondary title, Cuellar and Davis wouldn’t have the chance to fight for a strap. Leo Santa Cruz holds the WBA Super World featherweight title, and he’s not going anywhere soon.


« David Benavidez to fight in July