Top 5 Takeaways from Spence vs. Peterson 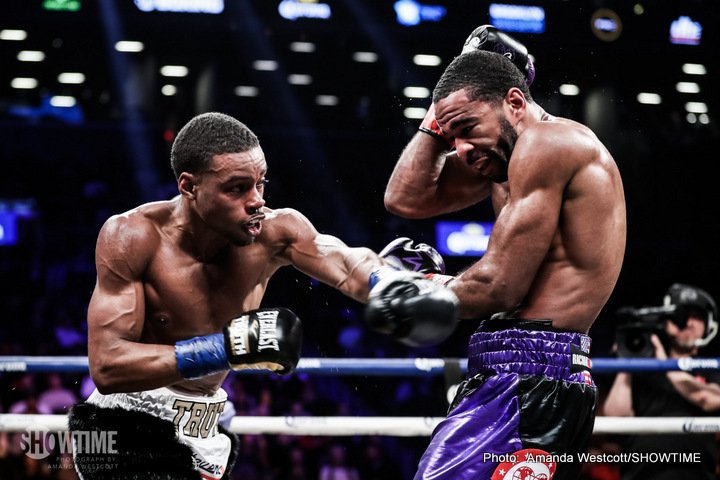 By Paul “Paparazzi” Jones: In the aftermath of Spence vs. Peterson, here are five key takeaways:

1. Errol “The Truth” Spence Jr. is who we think he is. If the accounts of Spence’s (23-0, 20 KOs) sparring sessions with Floyd Mayweather weren’t convincing enough, then his dominant victory over former IBF Junior Welterweight titlist Lamont Peterson (35-4-1, 17 KOs) should help to seal the deal.

Make no mistake: although Peterson moved up to 147 pounds to challenge the best, no fighter (aside to a prime Lucas Matthysse) gave Peterson a savage beatdown in the way that Spence did on Saturday night. Spence’s virtuoso performance sent shockwaves throughout the welterweight division and raised his pound-for-pound profile exponentially.

For all intents and purposes, Spence’s moniker appears to be an appropriate one and Twitter’s reaction to his victory supports this claim: 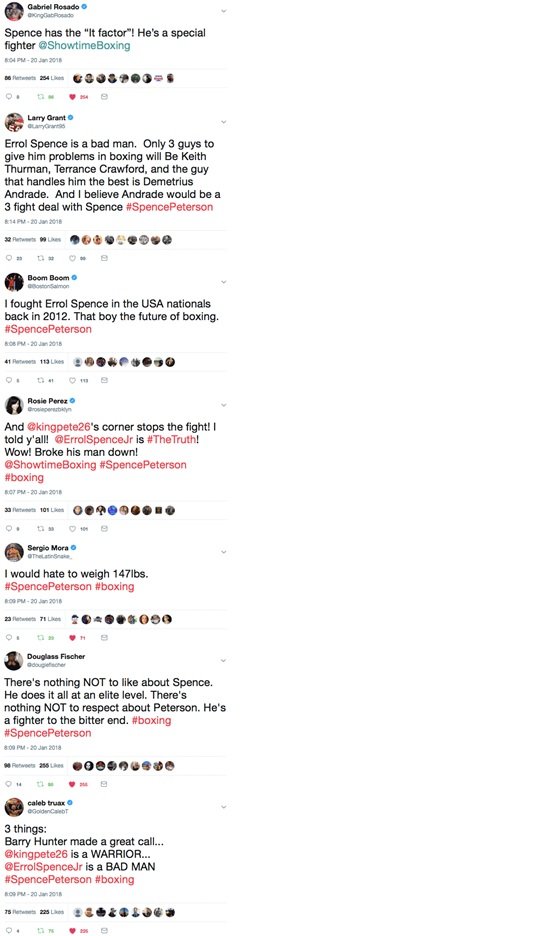 2. Spence is already putting together a strong bid for 2018 Fighter of the Year honors. The Texas-based fighter intends to be a busy champion, aiming to fight multiple times in 2018. This is welcomed news to boxing fans, especially if Spence can duplicate Saturday’s performance against other welterweight titlists and pound-for-pound entrants, such as Keith Thurman (32-0, 23 KOs) and Terence Crawford (32-0, 23 KOs). Wins against either of these fighters would put Spence in pole position to win the coveted year-end award. 3. There’s no existing blueprint for beating Spence, but power and boxing skills are a good place to start. While some armchair Eddie Futches point to defensive ‘holes’ in Spence’s game, presumably uncovered in the early going of the Peterson fight, exploiting these perceived shortcomings will take a savvy opponent. As RingTV.com Editor Douglass Fisher surmised, “If you can’t hurt Spence you don’t have prayer of beating him unless you happen to be a master boxer who can glide around the ring for 12 rounds.”

I’ll take that assessment a step further. Spence regularly spars with the heavy-handed, WBC junior middleweight champ Jermell Charlo; so “The Truth” is used to dealing with incoming power. Therefore, it’s going to take more than mere power to beat Spence. An opponent will need equal measures of power, elite boxing skill, and an A-level cardio game to get the job done. It remains to be seen whether Crawford and Thurman, who have these attributes, will be able to use their talents to best Spence should they fight in the near future. I’m certainly eager to find out. 4. Talk of Lamont Peterson retiring from boxing is greatly exaggerated. In the Spence vs. Peterson post-fight interview, Showtime Championship Boxing reporter and 2018 Boxing Hall of Fame inductee, Jim Gray asked Peterson whether he would “fight again” or whether he’s “had enough.” However, broaching the topic of retirement with Peterson was premature. Consider that Peterson hasn’t campaigned at welterweight for long and that, prior to his loss to Spence, the DC native was riding a two-fight win streak. That win streak could have been five consecutive wins had the Garcia vs. Peterson decision gone his way. I didn’t observe a shopworn or ‘punchy’ Peterson versus Spence, nor did Peterson lack physical or mental fitness. Peterson’s loss to Spence was simply a good fighter being beaten by what could be a special fighter, and there’s no reason to discuss retirement under those circumstances. In fact, there are many compelling welterweight fights that can be made involving Peterson (promotional ties aside), including bouts against WBO Champ Jeff Horn, Danny Garcia (rematch), Crawford, Thurman, Brandon Rios, Shawn Porter, and Manny Pacquiao. A fight versus Pacquiao could still nab the 33-year-old Peterson a career-high payday and signature win. In other words, there’s no need for Peterson to call it quits unless he no longer has a jones for prize fighting. 5. The Spence bandwagon is burgeoning, but we should proceed with caution. And for good reason. Spence is a highly-talented, throwback fighter who craves competition at a time when many elite fighters are avoiding it. But boxing teaches us that predicting transcendent fighters is anything but an exact science. Andre Ward derailing Sergey Kovalev‘s momentum and Srisaket Sor Rungvisai knocking Roman Gonzalez from atop his pound-for-pound perch are textbook examples. Therefore, we must exercise caution before we anoint Spence as boxing’s next big thing.


« Mike Tyson agrees with Canelo-GGG being scored a draw

Lomachenko’s next fight likely on April 28 »