Khan: Lo Greco took it too far with comments about personal life 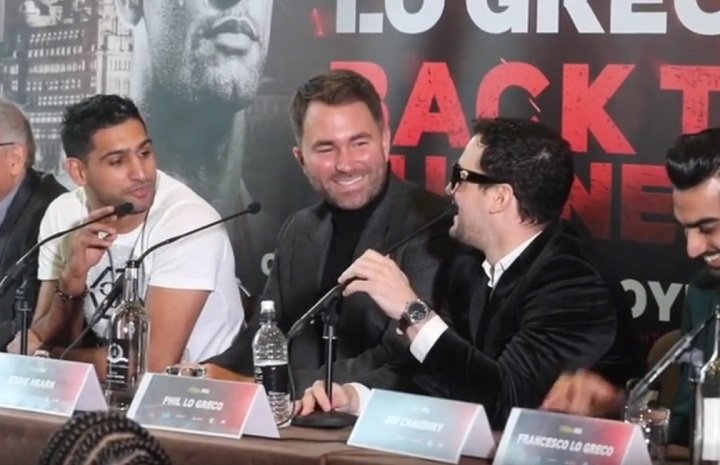 By Scott Gilfoid: Amir Khan tossed a glass of water in the face of Phil Lo Greco on Tuesday at their press conference after he made a comment about his personal life. Khan (31-4, 19 KOs) says the 33-year-old Canadian fighter took things too far with him veering away from boxing related comments and discussing his personal life.

Khan plans on using Lo Greco’s comments as motivation to beat him badly on April 21 in their fight on Sky Sports at the Echo Arena in Liverpool, England.

Khan, 31, probably should have done a better job vetting Lo Greco ahead of time if he wanted to avoid being trash talked nonstop. Lo Greco isn’t the type to hold back his thoughts about his opponents, especially when he’s facing a guy with a history of being knocked out like Khan. It’s the perfect situation for Lo Greco to gain a lot of notoriety in the boxing world in a real hurry. At the same time, Lo Greco can get a nice payday in a rematch with Khan if he pulls off an upset by knocking him out on April 21.

“Sometimes it’s a press conference and it’s about boxing not about your personal life and I do think Lo Greco took it a little bit too far by saying one or two things I wasn’t happy about,” Khan said to Sports News.

Once Lo Greco was muzzled, the press conference became boring with Khan telling the boxing media that he’s in his prime still, which surprisingly didn’t elicit any laugher. It was hard to believe that Khan was serious because his career is at least 7 years removed from him being in his prime. Khan’s prime is gone, and it’s been over with for many years. Khan’s comeback now is more about him returning for the final payday against Kell Brook than anything. While he talks about wanting to fight for a world title against IBF champion Errol Spence and WBA/WBC champion Keith Thurman, neither of those fighters are in his plans in 2018, and likely not in 2019 either.

“”It’s only going to motivate me to work even harder and make sure I beat this guy – and not just beat him but do it in such quality he will stop sulking,” Khan said.

I’m not sure what Khan means by saying Lo Greco was sulking. I didn’t see that today. I saw Khan angry when Lo Greco was insulting him, but I didn’t see any sulking. I noticed that Hearn stopped Lo Greco from talking and turned the microphone over to Khan, who preceded to drone on about a lot of boxing stuff that ended the press conference. The only one that was interesting today was Lo Greco. All the other guys that spoke were dull to listen and lacked the charisma hat Lo Greco had going for him. If Hearn and Khan were smart, they’d leave the microphone in Lo Greco’s hands for the next press conference and just let him talk. The guy is a natural showman.

NEXT: Murat Gassiev vs. Yunier Dorticos preview and prediction