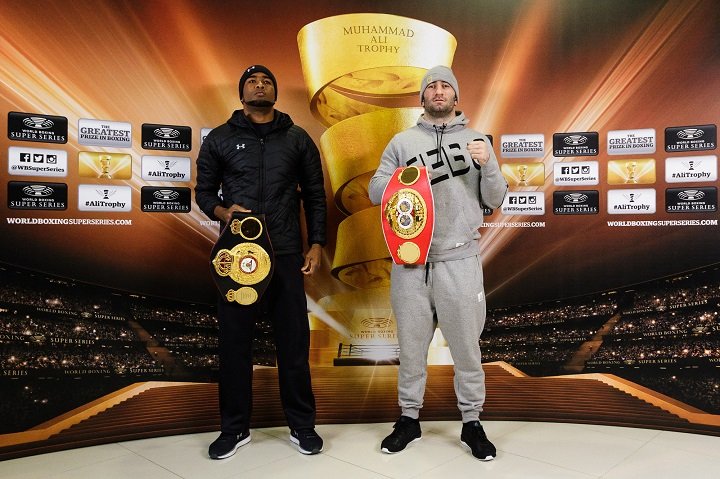 By Jim Dower: IBF World cruiserweight champion Murat ‘Iron’ Gassiev (25-0, 18 KOs) meets up with WBA cruiserweight champion Yunier Dorticos (22-0, 21 KOs) this Saturday night on February 3rd in what could be the best fight of the World Boxing Super Series [WBSS] tournament at the Bolshoy Ice Dome in Sochi, Russia.

These are 2 knockout artists with huge punching power and excellent talent. Neither of them is expected to win the WBSS tournament, but you never know. After the way Oleksandr Usyk struggled last weekend in winning a close and hotly contested 12 round decision victory over WBC cruiserweight champion Mairis Briedis, you cannot rule out Gassiev or Dorticos ending up as the winner of the WBSS.

Usyk is clearly not as good as many boxing fans originally thought him to be after watching him beat poor opposition until he was finally matched against someone that could fight in Briedis. Now things aren’t so clear about who will ultimately win the tournament.

Gassiev, 24, is coming into this fight with the Dorticos looking the best he ever has. Gassiev destroyed former cruiserweight champion Krzysztof Wlodarczyk in 3 rounds in his quarterfinals fight in the WBSS last October, and that performance put everyone on notice in the cruiserweight division. Dorticos likes to say that Gassiev caught Wlodarczyk when he was old at 36, but the shots that he knocked the Polish fighter out with would have put him down for the count at any age. That old age that caused Wlodarcyk to get stopped with a body shot in the 3rd. That was a left hook that would have stopped anyone in the cruiserweight division. Gassiev finally realizes that he’s a different fighter when he goes to the body instead of head-hunting all the time like he’d been doing.

”He has a problem. He has to find a defense against the missiles that are going to land on that big head of his. Gassiev will learn to respect ‘The KO Doctor’ on Saturday night,” Dorticos said.

Dorticos looked like he was in a real fight in his quarterfinals math against Dmiry ‘The Russian Hammr’ Kudryashov (21-2, 21 KOs) on September 23. The fight looked like an even one until Dorticos landed a right hand to the head that put Kudryashov down on the canvas for a knockout in round 2. Dorticos was getting hit hard before that by Kudryashov in a fight that had a lot of good 2-way action. Kudryashov, 32, does not have the chin to take major league punchers like Dorticos, so he wasn’t able to hang around long enough to knockout the Cuban. With the way that Kudryashov was punching, he would have gotten Dorticos out of there sooner or later had he not folded.

“I will put on another show on Saturday for the fans in Russia and around the world. I have nothing to worry about. Gassiev has,” Dorticos said.

Dorticos’ best wins of his career have come against Kudryashov and Youri Kalenga, but those are not major talents in the division. Those are contenders, but they’re not the best in the cruiserweight division. Dorticos is going to have to take some shots from Gassiev for him to win this fight because it’s probably not going to be like his last fight against Kudryashov.

I don’t see that happening. Gassiev has never been hurt before in his career, and he’s been battled tested in his fight with the big punching Denis Lebedev in December 2016. Gassiev won that fight by a 12 round split decision. One judge Pawel Kardyni of Poland had Lebedev winning by a 114-113 score. The other 2 judges had Gassiev winning by 116-111 and 116-112. Boxing News 24 had Gassiev winning by 8 rounds to 4 score. Gassiev knocked Lebedev down in the 5th round, and was landing the cleaner, harder shots the entire fight. Gassiev made the mistake of waiting for Lebedev to stop throwing his punches before he’d land his own shots. Gassiev waited too much and let Lebedev throw a ton of shots. Lebedev realized that he could shut Gassiev down by focusing on volume punching, which is why he was able to stay in the fight. But you could see that Lebedev was totally exhausted from throwing too many punches. He was arm weary and throwing shots with nothing on them at all. Each time Lebedev would stop throwing punches, Gassiev would nail; him with a punch that would land with a ton of power.

Lebedev’s eyes were badly swollen by the later rounds, and he’d looked like he’d taken a bad beating. Gassiev had Lebedev hurt and holding on in many of the rounds. In rounds 10, 11 and 12, Lebedev was running and holding, and totally exhausted. The rounds were close, but the body language and the spoiling tactics from Lebedev made it impossible to give him any of those rounds. Lebedev took a lot of punishment from the then 22-year-old Gassiev. I doubt that Lebedev would be able to take another beating like that from Gassiev without getting knocked out. Gassiev has improved since then, and Lebedev is now 38, and not likely able to run nearly as much as he did last time. Lebedev changed his entire fighting style for the Gassiev fight by running for the entire fight instead of standing and fighting.

The scoring for Gassiev-Lebedev fight left a lot to be desired. You can’t give Lebedev the win because he was being knocked backwards repeatedly by Gassiev’s hard shots, and he was tumbling like a drunk in the second half of the fight. You can understand why Lebedev would be so tired. He was moving constantly, and obviously his body wasn’t prepared for that type of fight. If Lebedev had stood and fought more, then he maybe he would have done better. But in looking at how badly swollen both of Lebedev’s eyes were by the 10th, he probably would have been bludgeoned into submission had he not moved as much as he did. It was strange to see Lebedev run from Gassiev, because he’d never run from an opponent before in any of his fights. But against Gassiev, Lebedev changed his fighting style entirely and still ended up losing. For some reason the World Boxing Association allowed Lebedev not to put his WBA cruiserweight title on the line for the fight with Gassiev. The WBA should have forced the issue, but they let Lebedev not have his WBA title on the line. If they had, Gassiev would be the IBF/WBA cruiserweight champion today instead of just the IBF champion. Boxing needs a commission that runs the sport so that you don’t mixed up stuff like that taking place.

“He has many amateur fights, good speed, and fast hands. He is a great opponent and I have prepared for 12 tough rounds,” Gassiev said about Dorticos. ”On Saturday I am going to take another step towards that dream in front of my proud countrymen,” Gassiev said.

Dorticos is a good fighter, but I don’t think he’s going to be able to take nearly the same amount of punishment that Lebedev took in 2016 against Gassiev. I see this fight ending early with Gassiev knocking Dorticos out by the 4th round. At the most, it might go 6 rounds if Dorticos chooses to run from Gassiev. I don’t think Dorticos can run. He’s never shown the ability to run, but you never know. Lebedev never ran before he fought Gassiev, and he was able to do it for 9 rounds until his legs gave out.

Gassiev is listed at 6’3 1/2″ compared to the 6’3″ Dorticos, but it looks like the stats for the height are a little off. Dorticos appears to be taller. He does have a 4 inch reach advantage over Gassiev. I doubt that’s going to matter much. Dmitry Kudryashov was giving away 5 inches in reach to Dorticos, and he was hitting him without any problems. Dorticos won that fight simply by being busier than Kudryashov and having the better chin.


« Khan: Lo Greco took it too far with comments about personal life