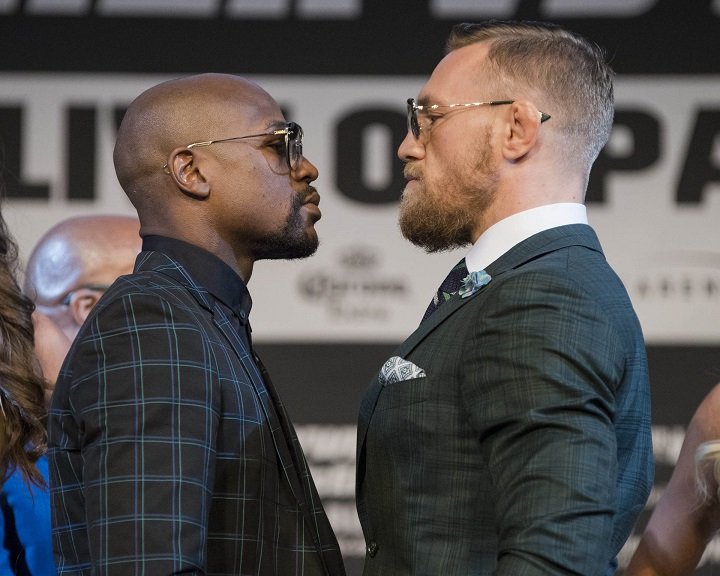 By Allan Fox: The retired soon to be 41-year-old Floyd Mayweather Jr. can’t seem to forget about UFC fighter Conor McGregor. Despite having already beaten McGregor last August and seemingly closed the book on their circus even fight, Mayweather is still wasting energy taunting him.

Earlier today, Mayweather posted a video of himself stepping inside the octagon cage and pacing back and forth, as if he were preparing for a MMA fight. The message here is that he’s thinking of facing McGregor in the UFC at some point in the near future. Mayweather might be looking for another 9-figure payday like the one he received the last time he fought McGregor on August 26.

The timing of Mayweather posting this video, right after the announcement of the news for the Saul Canelo Alvarez vs. Gennady ‘GGG’ Golovkin 2 rematch, seems to be a move to vacuum away from of the fan interest in that fight by upstaging it. The last time Canelo and Golovkin fought in September of last year, Mayweather hurriedly staged his circus event against McGregor 3 weeks ahead of it and sold the fight for $100 on pay per view.

It should be interesting to see if Mayweather chooses to sign in a hurry for a rematch with McGregor to upstage the now scheduled May 5th rematch between Canelo and Golovkin. If Mayweather is going to take away interest in a second Canelo-Golovkin fight, he’s going to need to get the rematch done with McGregor quickly in order to schedule it before their fight.

Mayweather likely will want nothing to do with a fight with McGregor in the octagon, even though it would keep his name in the news for a little while longer. It would end badly for Mayweather with McGregor taking him down on the matt and forcing him to tap out with a submission hold.

Knowing McGregor, he might choose to let the match drag out for a while before he forces Mayweather to submit. Mayweather would get a big payday against McGregor, since a lot of boxing and MMA fans would gladly pay to see Mayweather lose for the first time. It wouldn’t count as a loss on Mayweather’s boxing record obviously, because it would be an MMA fight.

If Mayweather could let his ego take a hit in facing McGregor in the UFC, then it’s a fight that could happen. It would depend on hungry Mayweather is for money and the attention he would receive from a second fight with McGregor. If the idea is for Mayweather just to upstage the second Canelo-Golovkin fight, he’d certainly accomplish his goal in doing that. There might be even more interest in a Mayweather vs. McGregor fight in the UFC than there was in their boxing match last August. A lot of fans are dying to see Mayweather lose, and this would be the best chance of that happening.

Khan: Lo Greco took it too far with comments about personal life »