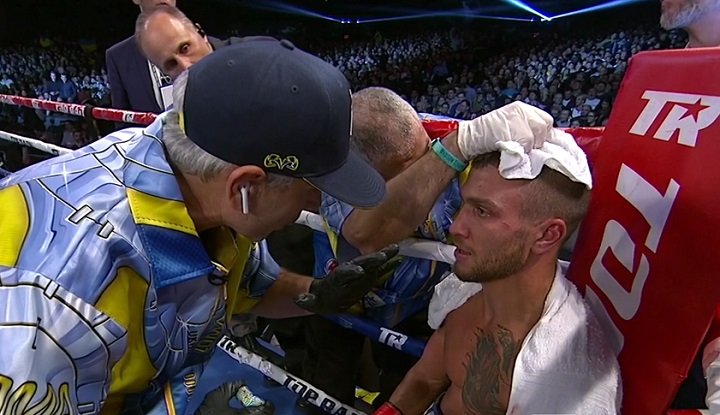 By Godfrey Falcon: History was made on December 9th, 2017 at the Madison Square Garden in New York, where the first ever professional boxing match was held between two two-time Olympic Gold Medalists. It was a bout that had some critics and fans thinking 50-50, but also an alarmingly high number of people presuming it would be a landslide victory for one or the other fighter.

At the end of the night, only one group would be vindicated, and that was those who predicted a landslide victory for Vasyl “Hi-Tech” Lomachenko (10-1) of Ukraine over Cuba elite Guillermo “El Chacal” Rigondeaux (17-1). From an observer who predicted a close bout that would ultimately end in a Rigondeaux Unanimous Decision, I and many others were proven wrong, and had to admit that Vasyl Lomachenko, as good and talented as he is, was levels above what we imagined.

In a stunning display of boxing IQ, Lomachenko boxed literal circles around Rigondeaux, who is usually accustomed to being doing the bewildering. After a feel-out round 1, in which neither fighter did anything dramatic, Lomachenko started to assert his will, and the Cuban did not know how to answer. Because of the defensive artistry that both employ, neither fighter ended up hitting with a high percentage. Lomachenko landed at a 16% connect rate, doubling a shocking 8% by Rigondeaux, who is normally so accurate of a puncher. Such was the wizardry of Lomachenko that Rigondeaux landed no more than 3 punches per round for the entire fight. And it was the defense of Lomachenko, on top of the fact that Lomachenko was countering when he wanted, that greatly discouraged the former undefeated fighter. Whether it was uppercuts on the inside, tight hooks after getting clinched, or short straight lefts, Rigondeaux was getting tagged by good shots and unable to retaliate.

There was of course some drama during the fight. Rigondeaux, growing in frustration, kept clinching Lomachenko hoping to stymie his elusiveness, and would even attempt be throwing elbows and a low blow. Having learned from his only defeat to Orlando Salido (44-14-4) back in 2014, Lomachenko knows how to fight a dirty fighter, and maybe even fight a little dirty himself to gain respect. An entertaining exchange occurred after the bell of the 5th round, in which after holding excessively to Lomachenko, Rigondeaux threw an elbow to Lomachenko’s right side. Lomachenko didn’t take that standing, and threw a light punch to Rigondeaux’s face. Rigondeaux reflexively retaliated, almost hitting the referee in the process! Lomachenko got the better of Rigondeaux even in that off the cards exchange.

By the 6th and final round, Lomachenko started to shift into overdrive, and though Rigondeaux would try to do the same, he would continually be pushed back to defensiveness due to the work-rate of the Ukrainian phenomenon. At 0:39 seconds left in the 6th round, Lomachenko caught Rigondeaux with a short and quick left hand that buckled his legs and made him hold on to Lomachenko. After that, his legs looked wobbled for the rest of the round, and lo and behold: after the bell, Rigondeaux quit on his stool. Perhaps his pride did not allow him to be toyed with against the superior boxer in Lomachenko, or perhaps he really did have a hand injury, as he claims. But in the end, he and those who predicted Lomachenko would get a thorough schooling were humbled, and defeat was ultimately admitted by the Cuban.

There are some interesting post-fight parallels to the Floyd Mayweather (501) vs. Manny Pacquiao (59-7-2) fight from 2015. Both were considered elite boxers, and the victor would decide who was the pound for pound champion. When Pacquiao lost the welterweight bout, claims of a shoulder injury were made, and Pacquiao’s fans were stating that if it weren’t so, Mayweather would’ve lost the fight. Pacquiao was smaller than Mayweather having started his professional career at 112 lbs., whereas Mayweather started pro at 130 lbs. Pacquaio was damaged by the time he fought Mayweather, having been knocked out by Juan Manuel Marquez in their fourth bout. These were other excuses, legitimate or not, that Mayweather had an unfair advantage. Whether those advantages were unfair or not, Pacquiao lost the fight, and as good as he was, Mayweather was declared the better of the two. And while Rigondeaux has many fans who were also Mayweather fans, the same logic dictates the same outcome. Lomachenko is the better of Rigondeaux, and it seemed apparent that no age, height, or weight gap would’ve made a difference in the outcome, because there is no other outcome.

What’s next for Rigondeaux? He stated that he still wants to fight the best. Perhaps the fighters who may have avoided him in the past now see him as beatable, and will take the fight to him. The likes of Leo Santa Cruz, Carl Frampton, and Jesse Maldonado come to mind from the featherweight division. But after such a devastating loss, particularly to his ego, retirement may come within a year. Time will tell; Rigondeaux is still an elite boxer who cannot be defeated by anyone except Lomachenko, as the record shows. What of The Matrix, the other nickname fans have bestowed upon Lomachenko? What could possibly be inshore for the Ukrainian Olympian who keeps proving he is better than we think, having now so thoroughly outclassed his opposition that four consecutive good fighters (two of which were elite and undefeated at the time) quit rather than subject themselves to more humiliation and punishment? One option he has is to unify the 130 division, in the same manner that Terrence Crawford (32-0) unified the 140 division. There are some good names act 130. Will Crawford and Lomachenko fight each other? With both fighters dominating at their appropriate weight classes, moving up seems likely. Crawford is looking for the welterweight champions at 147, as a true champion should. And the biggest fight in store for Lomachenko is the former lightweight and current light welterweight champion Mikey Garcia (37-0). Can Lomachenko jump two divisions and fight Garcia? Again, time will tell. But his future is bright, and the more and more his detractors say he isn’t anything special or that he’s a hype job, the more convincing his abilities become to the red-pilled eye. In Shakespeare’s words, “Methinks the lady doth protest too much.”


« Tyson Fury fails to show up for UKAD hearing