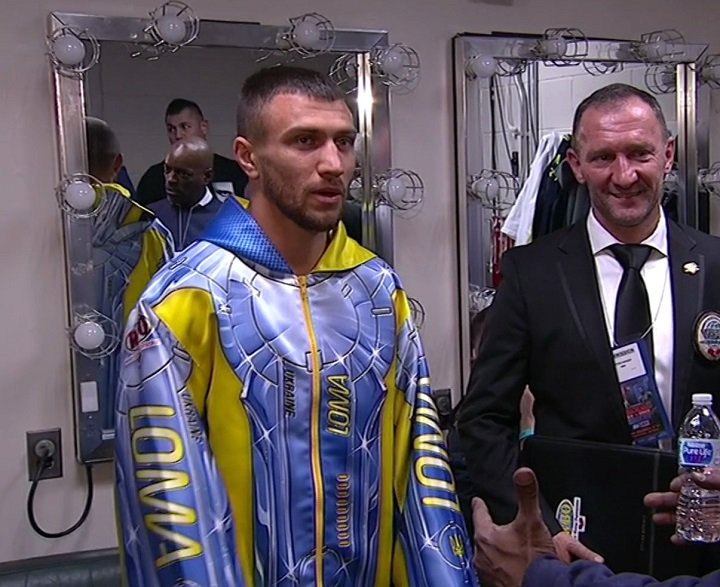 By Chris Williams: Vasyl Lomachenko (10-1, 8 KOs) said after his 6th round stoppage win over Cuban star Guillermo ‘The Jackal’ Rigondeaux (17-1, 11 KOs) that he wasn’t surprised he quit in the ring after the 6th round.

Lomachenko said he predicted the knockout at the final press conference last Friday. Lomachenko says he realized after round 3 that he was going to win the fight. Rigondeaux hadn’t thrown any punches in round 2 and 3, and Lomachenko understood that he had the fight by that point. Rigondeaux blamed his loss on a left hand injury he says occurred in round 2. That excuse didn’t fly with Lomachenko, who says you have to be willing to die inside the ring. Rigondeaux, with his hand injury, obviously wasn’t up for risking death last Saturday night against Lomachenko at Madison Square Garden in New York.

“No, it didn’t surprise me [that Rigondeaux surrendered by retiring on his stool],” said Lomachenko. “I was waiting for him to do something more. And during the press conference, I had said I wouldn’t be surprised if he said ‘no mas.’’’

If Rigondeaux was injured or simply over-matched, it’s understandable on both accounts why he would give up. If Rigondeaux’s left hand was injured, then there’s no way he could win the fight using just his right hand, because he’s not accustomed to using that hand for doing a lot of punching. It would have been pointless for Rigondeaux to have stuck it out for the reminder of the fight with just 1 hand working for him. If there was no injury and Rigondeaux was simply over-matched, which appears to be the case, then quitting makes sense as well. Why stay in the ring if the only outcome is to take a needless beating and possibly get hurt? It would have been far worse for Rigondeaux to stay in there and just soak up punishment against a guy with the kind of size advantage Lomachenko had over him.

“I fight with one hand in Macao. It depends on you,” said Lomachenko. ”If you want to win, want to fight, you need (to be willing to) die in that ring.”

With Lomachenko’s attitude of being willing to die in the ring, he should have stepped it up a long time ago and moved up 2 divisions to fight Terence Crawford at light welterweight. Lomachenko could have tested that theory out for himself in a fight that would have been every bit as difficult for him as it was for Rigondeaux to move up in weight 2 weight divisions to take the fight last Saturday at super featherweight. Rigondeaux’s natural weight class is super bantamweight. Lomachenko didn’t meet him halfway. Lomachenko didn’t want to fight Crawford at light welterweight, but he was fine with fighting a guy moving up 2 weight classes to fight him. There’s something wrong with this picture.

Rigondeaux threw punches in the 1st round. That was his best round of the fight. After that round, Rigondeaux stopped fighting back. Lomachenko did very little in the 2nd round as well. Its not as if he was hammering Rigondeaux with shots. At best, Lomachenko landed some tapping shots on the top of Rigondeaux’s head when he was bending low to escape the attacks. There wasn’t much of anything coming from Lomachenko in the offensive skills department. If you look at the 2 fighters through 3 rounds, Lomachenko was just doing a tad bit more than Rigondeaux. We’re not talking about a waterfall of shots that were raining down on Rigondeaux from the bigger Lomachenko. The 2-time Olympic gold medalist from Ukrainian was doing a little bit more, and he was hardly impressing.

“I want a big fight, a big name. I’m ready for anybody,” said Lomachenko.

“It’s not wrestling, it’s boxing,” said Lomachenko in addressing all the holding that was being done by Rigondeaux in the fight. “Maybe Mikey Garcia. It depends on Bob Arum,” he said. “My weight is 138,” said Lomachenko when asked who he wants to fight next.

For Lomachenko to fight Garcia, he’s going to need to move up in weight to the lightweight division. Garcia isn’t going to come down to 130 just so he can give Lomachenko a weight advantage. Lomachenko just had his weight advantage over Rigondeaux. He’s not going to get Mikey to drain himself just so he can get an advantage against him too. If Lomachenko does stay at 130, he could be fighting WBC champion Miguel Berchelt next. He’s coming off of a big win over Francisco Vargas, and he no longer has a with Orlando Salido looming, given his 9th round knockout defeat last Saturday night at the hands of Miguel ‘Mickey’ Roman. Lomachenko vs. Berchelt would be a good fight if Top Rank can set it up. I don’t see why Berchelt would take that fight though. If he’s only going to get a 75-25 deal to fight Lomachenko in a unification match, where’s the gain? I don’t think the fight is worth it for Berchelt. I wouldn’t have Berchelt take the fight if I were his promoter, because the money he makes fighting Lomachenko won’t be much different from what he’s already making. Besides that, Berchelt would have to deal with all the clowning/showboating that Lomachenko does. It wouldn’t be a normal fight. It would be a fight in which Lomachenko tries to make Berchelt look bad for as long as it lasts. I don’t see it being worth it for Berchelt to take the fight. Lomachenko’s bad habit of clowning his opponents will likely lead to him not getting the top fighters to face him unless he becomes the mandatory challenger to a champion. The money isn’t good enough to fight Lomachenko, and then his opponents have to deal with his style of fighting. It’s not worth until.

Arum believes Lomachenko will soon be a pay-per-view fighter. I personally don’t see that happening. Lomachenko is a good fighter on ESPN and HBO, but he’s not bringing in the kinds of numbers that would indicate that he’ll be able to sell his fights on PPV. If Lomachenko does become a huge PPV attraction, more power to him. I don’t see it happening with the way things are looking now and with his style of fighting. Lomachenko isn’t exacting to watch. He doesn’t let his hands go enough for him to be one of those fighters that are interesting to watch.