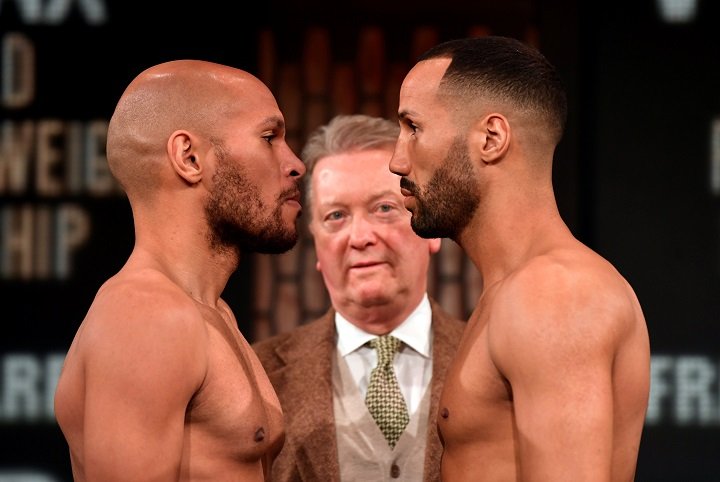 By Scott Gilfoid: James DeGale will be defending his IBF super middleweight title tonight against #15 IBF Caleb Truax tonight at the Copper Box Arena in London, England. DeGale complains that he’s taxed too much from the earnings he makes in boxing. He says he loses roughly half of what he makes from being taxed.

According to the Mail, DeGale (23-1-1, 14 KOs) feels he’ll need to make another £30million in the remainder of his career for him to live his life in luxury as he’s living right now. Unfortunately, that may be hard for the 31-year-old DeGale to do though, given how bad he looked in his last fight against Badou Jack on January 28.

DeGale thinks he could make between £5 million and £10 million for his unification fight against George Groves in 2018. If Groves wins the World Boxing Super Series tournament by beating Chris Eubank Jr. and Callum Smith, he’ll be in position to face DeGale next year in a big money fight.

DeGale will need to do his part in beating the 34-year-old Truax tonight in what amounts to be a stay busy fight for him. A loss for DeGale against Truax would be a huge upset of major proportions, but it’s possible. DeGale fell apart completely after 6 rounds against Jack last January. It could be a stamina issue with DeGale. You never know.

”Ten million quid is no longer that much money. Not when you’ve got to give the tax-man 47 per cent and pay your team and all your expenses,” said DeGale to the Dailymail. ”Out of every million I’m lucky if I get to keep four hundred grand.”

Oh my, it does seem as if DeGale is bragging about his cash, doesn’t it? If DeGale is having so many problems with his taxes, then he should look to move to Switzerland or perhaps Monte Carlo if he can somehow arrange that. I believe those are low tax countries. It would be a culture shock for DeGale to move away from the UK, but at least he’d be able to keep more of his money.

DeGale might not have too much time left in his career as a top earner. All it takes is one loss and DeGale will be back among the contenders, scrapping for a living. The worst thing that could happen to DeGale is if he gets beaten, and if the guy that beats him unifies the division. There won’t be any way for DeGale to pick up an easy belt and milk it the way he’s doing now. DeGale is too small and weak to move up to light heavyweight.

DeGale probably can’t boil down to 160 to go after one of the titles in that weight class. Even if DeGale could make middleweight, he’d have a devil of a time trying to beat IBF/WBA/WBC champion Gennady ‘GGG’ Golovkin. 2018 is going to be extremely important for Degale. You can argue it’ll be a make or break year for him. If things go right, DeGale will make a tremendous amount of money beating Groves or Chris Eubank Jr. If things go badly for him, DeGale will lose his IBF title, and he’ll be back to being a contender.

”What will me against George be worth next year?” said DeGale. ”The will say at least £5 million each but with the history between us two and all those belts on the line I will be looking for £10 million,” said DeGale.

I wouldn’t look past Truax if I was DeGale, and I wouldn’t assume that Groves will win the World Boxing Super Series tournament either. I think there’s a good chance Groves loses to either Eubank Jr. or Callum Smith. Juergen Braehmer has to be seen as a threat to beating Groves as well.