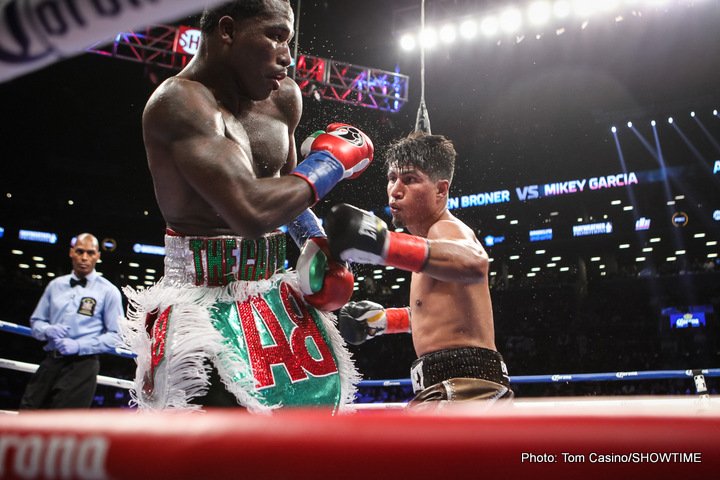 This would be a 50-50 one-fight deal for the 29-year-old Garcia to face Linares. De La Hoya says he’s not asking for Garcia (37-0, 30 KOs) to agree to future options or any long term deal. Garcia recently turned own a fight with WBO junior middleweight champion for December 2 on HBO, because Golden Boy wanted a long term deal in exchange for him getting the fight. Garcia wants to continue to be a free agent.

De La Hoya says he’s going to need to know soon whether Garcia will take the fight with Linares (43-3, 27 KOs), because he needs to choose the venue for the fight and he has to start the promotional machinery to get the boxing fans excited about this match-up. It’s a fight between two lightweights, so it’s unclear how much interest there will be from the casual boxing fans of the sport. The lightweight division isn’t as popular as the welterweight, middleweight and heavyweight divisions. Those are the popular divisions in the U.S.

“We are serious about making the fight,”De La Hoya said to ESPN.com about the Linares vs. Mikey Garcia fight. “No interim fights, straight to this fight. We want the fight to happen in the first quarter of next year. Linares is all in. Linares feels 1,000 percent confident that he can beat Mikey Garcia,” De La Hoya said.

Linares, 32, has had problems with big punchers in the past, getting stopped by Sergio Thompson, Antonio DeMarco and Juan Carlos Salgado. However, Linares has won his last 12 fights, and he’s beaten some punchers along the way in Luke Campbell, Anthony Crolla, Kevin Mitchell and Javier Prieto. It’s quite possible that Linares’ chin problem is a thing of the past. If so, then he could have enough talent to beat Garcia. Linares is catching Garcia at the right time with him recently bulking up to light welterweight to fight former 4 division world champion Adrien “The Problem” Broner on July 29. Garcia won the fight, but he gassed out in the last 5 rounds and didn’t look all that impressive.

“You throw everything in the pot and split it down the middle,” De La Hoya said about splitting the loot for the Linares vs. Garcia fight down the middle for a 50-50 deal. “My message to Mikey is, Do you want to be great or do you just want to be a fighter who gets [television] dates and doesn’t fight for legacy or to one day be in the Hall of Fame?” said De La Hoya.

It’s a bit early for De La Hoya to be talking about Hall of Fame for Mikey Garcia. He’s missed a lot of time with his career due to promotional issues, and he still hasn’t beaten anyone in a career-defining fight. You can’t call a washed up and weight drained looking Broner a career defining fight for Garcia. Before the Broner fight, Mikey’s best wins have come against Orlando Salido, Roman Martinez, Juan Manuel Lopez, and Jonathan Victor Barros. Those aren’t big enough names to be talking of Mikey Garcia going to the boxing Hall of Fame.

Lopez and Martinez were arguably shot fighters by the time Mikey fought them. Mikey’s win over Salido was tainted, because his trainer Robert Garcia pulled him out in the 8th round due to a broken nose. Salido was starting to come in the 7th, and it looked like the fight was changing hands. We’ll never know what would have happened if Robert hadn’t pulled Mikey out of the fight. Salido saw it as weakness that Mikey let the fight be stopped, because he also had a broken nose, and he wasn’t looking to get out of the fight.

Linares vs. Garcia is a decent fight, but hardly a great one. It would be better to see Mikey move up in weight to 140 or 147 and take on Terence Crawford, Sergey Lipinets, Errol Spence Jr., Keith Thurman, Jeff Horn or Danny Garcia. With Garcia recently wanting to fight Cotto, you can’t say that the welterweight division would be too high of a weight for him.

Coming back down in weight could be difficult for Garcia. He’s already a very big lightweight, who should have moved up to 140 a long time ago. Moving back down to 135 after fighting Broner is a backwards move on Mikey’s part. It could be difficult for Mikey to make 135 without weakening himself. Moreover, it makes you wonder what the issue is for Mikey in him not fighting in the light welterweight division. The division is more suited to Mikey’s body size, and yet he seems to be avoiding it for some reason. In the past, many boxing fans felt that Mikey was duckling a fight with Terence Crawford with the way he was staying at 135 rather than moving up in weight. Now that Crawford has moved up to 147, Mikey has nothing to worry about anymore. He should move up in weight to fight the guys at 140 instead of moving back down to lightweight to face Linares. Garcia needs to dare to be great. He’s doing the opposite by staying at 135.