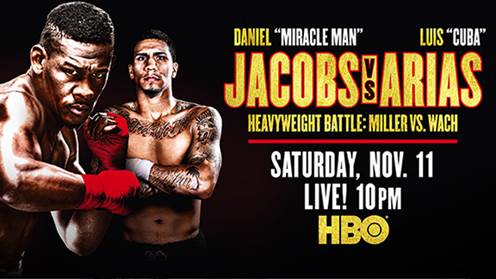 By Allan Fox: Luis Arias (18-0, 9 KOs) feels overlooked by the highly hyped former middleweight champion Danny “Miracle Man” Jacobs (32-2, 29 KOs) ahead of their fight this Saturday night on November 11 on HBO Boxing at the Nassau Coliseum in Uniondale, New York.

Jacobs will be turning 31 in February, and Arias sees himself as being the younger, fresher of the two fighters. Arias’ plan is to take the fight to Jacobs, hitting him hard on the jaw immediately, and forcing him into a war that he’s prepared to win.

Jacobs is coming into the fight with the popularity from having lost his last match against IBF/IBO/WBA/WBC middleweight champion Gennady “GGG” Golovkin on March 18 in a fight that was televised on HBO PPV. Jacobs made it close in losing a 12 round unanimous decision. However, what’s unclear is whether the fight was close because of Golovkin’s tactical blunder of choosing to box Jacobs instead of following the blueprint created by Dmitry Pirog and Matt Korobov in how to beat the Brooklyn, New York native. Those fighters proved that the best way to beat Jacobs is go pressure him and look to knock him out. The way not to fight Jacobs is to box him, which is what Golovkin did.

You can blame Golovkin’s trainer Abel Sanchez for using the wrong blueprint for Jacobs. That was his decision to have Golovkin box a boxer instead of using the proven method that Pirog employed in beating Jacobs.

Jacobs is underestimating me,” said Arias to ESPN.com. ”Many people do not know me, he does not know me. They think it will be easy, but, in reality, it is going to be a war. With a knockout and a victory I put my name high in the division and I’m ready. We hope that the triumph ends on our side,” said Arias.

Arias hasn’t made a big name for himself yet due to his lack of quality opponents on his resume. Through the first 5 years of his pro career. Thus far, the only good opponent that Arias has faced is Arif Magomedov, who he stopped in the 5th round on June 17. The rest of the guys that Arias has faced have been weak opponents. It’s still unclear what Arias is capable of doing.

Jacobs’ promoter Eddie Hearn gave the green light to HBO for the Arias fight, which means he feels this is a guy that he can beat. Hearn had to have gone through Arias’ past fights with a fine tooth comb to make sure he’s vulnerable enough for Jacobs to beat him. Hearn has been wrong before though. Hearn seems to be overestimating Jacobs’ talent level, which suggests that he might be mistakenly thinking that the Arias fight will be a cakewalk for him. Arias would be a cakewalk if Jacobs were as good as Hearn thinks he is, but he obviously isn’t.

There’s a lot of pressure on Jacobs to look good in this fight with Arias. This is the first time Jacobs will have fought on HBO Boxing, as well as his first fight with new promoter Eddie Hearn of Matchroom Sport. Both HBO and Hearn are hoping that Jacobs can turn into a star overnight, and fight Gennady “GGG” Golovkin and Saul Canelo Alvarez. For HBO, Jacobs gives them potentially another big name to fight GGG and Canelo. Hearn believes that Jacobs is the best fighter in the middleweight division, and he thinks he’ll prove it in 2019 by beating both Canelo and Golovkin. The reality is likely going to be different. Hearn is getting Jacobs late in the game. He’s not the young fighter he once was, and he’s still just as vulnerable now as he was in the amateur ranks when he having problems with punchers back then.

The book on Jacobs is he has a weakness in the chin problem. If he’s pressured and hit hard, he’ll crumble. Golovkin failed to use the right strategy against Jacobs, and he paid for it by almost losing to him. Arias has the advantage going into the Jacobs fight in knowing how to beat him, and not being foolish thinking he should only box him for 12 rounds instead of looking to knock him out like Pirog did. Arias has the right strategy for the Jacobs fight. Now it’s up to him to see if he can carry it out. Pirog had to take some big shots from Jacobs before he was able to knock him out in the 5th. Unlike Golovkin, Pirog was willing to take some big shots in order to go for a knockout. He knew obviously that if he hung in there long enough, he’d KO Jacobs.

Pirog wasn’t going to waste time trying to get a “decision fight,” as he knew the best way to beat Jacobs was to KO him and not play around and fight the Miracle Man’s fight by exchanging jabs and power shots in a chess match for 12 rounds.

Arias is counting on a win over Jacobs leading to him getting a fight against Golovkin or Canelo in 2018. It certainly won’t hurt Arias’ chances of getting one of those two to fight him if he knocks out Jacobs. Arias would carve a big name for himself in the middleweight division if he unseats Jacobs on Saturday night. Right now, the casual boing fans still don’t know who Arias is. But a victory over Jacobs will be a great way for him to introduce himself to the boxing fans around the globe.

The good news for Arias is Jacobs and his promoter Hear do seem to be overlooking him. Jacobs has been talking endlessly about how he wants a rematch with Golovkin, and he feels he’ll get the rematch with him in 2018 with the help of HBO and Hearn. Arias can be the spoiler in Jacobs’ plans for a rematch with GGG. By Jacobs overlooking Arias, he could be making the mistake of his life.

A loss for Jacobs to Arias will send his boxing career in a death spiral. Jacobs’ career won’t be necessarily over with if he gets beaten by Arias, as he’ll still have HBO and Hearn to bail him out. But if Jacobs loses again after that, it’s hard to imagine HBO and Hearn sticking by his side. They’ll likely throw Jacobs overboard and look to get on board the Arias express to ride it as long as they can.

“I want my name to sound next to Canelo and Golovkin. I know that a victory will give me the possibility of a fight with them,” said Arias.

Beating Jacobs won’t necessarily give Arias a fight with Canelo or GGG right away. But it will help him get a shot against one of them eventually if he keeps winning in the future. Canelo will likely face Golovkin or the winner of the December 16 fight between David Lemieux and Billy Joe Saunders next. Arias is not a big enough name for Golden Boy Promotions to let Canelo fight him, even if he does get past Jacobs. Canelo only fights on HBO PPV now, and that means he needs to face guys that at least some boxing fans will be willing to pay to see him fight. Arias will need to keep winning for him to eventually get a fight with Canelo.

When I hit him hard in the jaw, (Jacobs) will know that it is difficult to fight and I will knock him out,” Arias said. 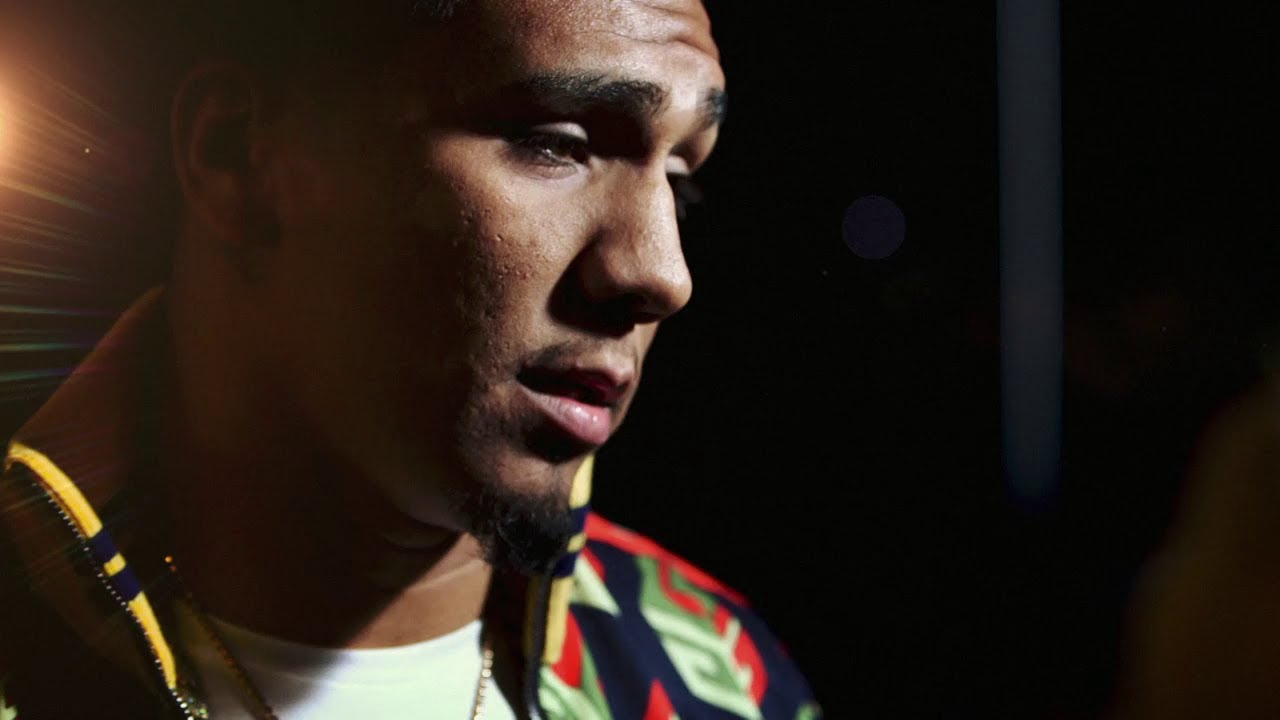