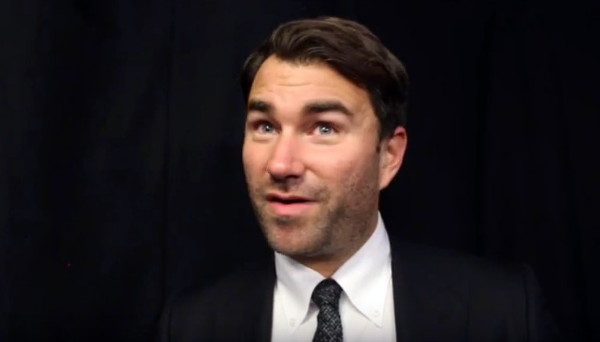 By Allan Fox: Anthony Joshua’s promoter Eddie Hearn was amused by Deontay Wilder’s request of a 50-50 split of the revenue for a unification fight against Anthony Joshua in 2018. Hearn says he was “speechless” after hearing of Wilder’s wish for an even split of the money for the Joshua fight.

Hearn believes Wilder must have been joking when he made the request. Hearn sees Wilder’s request as a starting point for the negotiations, but obviously he’s not going to get that split.

If Wilder stays with his request to get a 50-50 deal, he could price himself out of the Joshua fight. Hearn will probably never give Wilder the money that he’s looking to get. If Wilder is lucky, he might be able to get a 60-40 cut of the money. If he’s not, he could wind up taking considerably lower than that. There’s always the rematch. If Wilder beats Joshua in 2018, he’ll be able to negotiate for a bigger split in the second fight.

”The fight has the potential to be so much bigger, but the fans don’t really care,” said Hearn to secondsout. ”They just want it now. Joshua is a Brit, who boxes in England. He needs to be much bigger in America, and he’ll be over time. Deontay is an American who boxes in America. More people in England know Deontay than they do in America. The fight can be a lot bigger. It’s going to be difficult, but we want the fight. Deontay Wilder says the fight should be a 50-50 split. I’m guessing he’s just having a joke with that. It’s left me speechless. We all got to start somewhere obviously,” said Hearn.

Hearn’s idea of making the Wilder vs. Joshua fight a much bigger by waiting won’t work. The boxing public wants to see the fight now, so Hearn can’t wait on the fight. There’s too much of a risk to let the fight marinate the way he wants to. Wilder or Joshua could get beaten.

“We had a good breakfast meeting with Shelly [Finkel] and Al [Haymon]. Everyone’s on the same page,” said Hearn. “It’s the biggest fight in world boxing. We’re going to work on venues and dates. We spoke about both fighting on the same card in March, and then fighting in June or July. It’s going to be difficult on the financials and the split. We’re all trying to see if we can get it over the line. If I was Deontay’s promoter, he wouldn’t be able to walk down the street without people knowing who you are. You are the world heavyweight champion. I think we need to build both of them here, but maybe we won’t have time.”


« De La Hoya says Canelo might not face Golovkin next

Jacobs wants Canelo or GGG next »