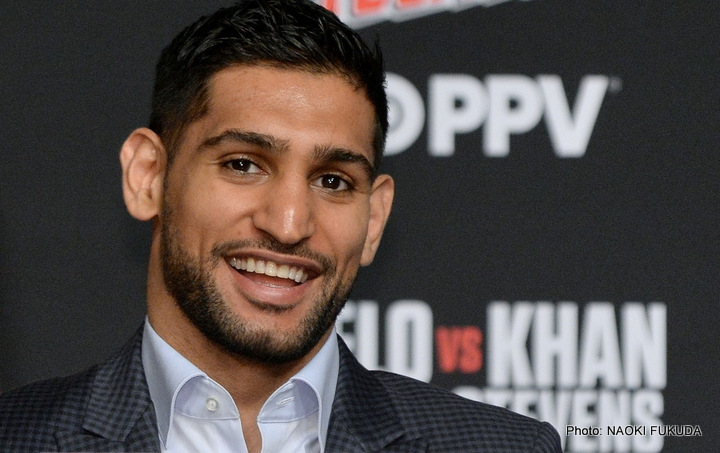 By Jeff Aranow: Amir Khan says he’s ready to make a huge fight against Kell Brook in 2018, but only after each of them takes a tune-up fight or 2 to help make their fight bigger. Khan (31-4, 19 KOs) says he wants at least 1 tune-up fight to get the ring rust off before he fights the 31-year-old former IBF welterweight champion Brook (36-2, 25 KOs) in 2018.

Winning a couple of tune-ups against carefully selected opposition probably won’t do much to rebuild Brook and Khan’s status in the boxing world. The only way to do that is for them to face good opposition. That’s not what Khan has in mind though. He wants tune-ups, and those types of fights aren’t going to budge the opinions of the hardcore boxing fans by much. The casual fans might get excited at seeing Khan and Brook smash over-matched opposition. That’s likely what Khan is counting on when he talks of wanting to build up the Khan-Brook fight to make it bigger.

“For me and Kell Brook at the moment, I think the fight could be bigger if we both get a couple of wins,” Khan said to skysports.com. ”It will be a big fight now, but it will be a massive fight if we wait maybe another fight. One hundred per cent I would love that fight.”

Khan wants his next tune-up fight to take place in December in the UK in front of his own boxing fans. That makes sense. Khan’s fan base is in the UK, and he hasn’t fought there in 4 years since his close 12 round unanimous decision win over Julio Diaz on April 27, 2013. That was Khan’s only fight in England in the last 6 years. Whoever Khan fights in December, it’s going to need to be someone that isn’t too good. It’s been ages since Khan fought, and he cannot afford for him to slip on a banana peel end up losing again.

Khan’s been knocked out 3 times in his career in losses to Briedis Prescott, Danny Garcia and Saul Canelo Alvarez. Those were all BAD knockout defeats for Khan. But even against Julio Diaz, Khan was hurt several times and knocked down. Diaz wasn’t supposed to be a threat to Khan, and yet he wobbled him 3 times in the fight. Khan’s manager Al Haymon would need to choose carefully when he picks the guy he fights in a tune-up in December.

Brook stepped up the pressure on Khan this past week during a media event in the UK. Brook called Khan out repeatedly during the event, saying he wants to make the fight happen in 2018. It’s more important than ever for Brook and Khan to face each other. Brook was stopped in his last fight against Errol Spence Jr. on May 27 at Bramall Lane. Brook’s left eye socket was fractured during the fight. The injury was the second of its kind for Brook, and there’s speculation that he might continue to suffer this type of problem in the future. That’s reason enough for Khan and Brook to face each other as soon as possible before one of the two gets injured again.

Khan and Brook both need to rebuild their careers before they face each other next year. Khan wants a tune-up fight in December. Brook has mentioned wanting to fight in that month as well this past week. Neither fighter has an opponent scheduled as of yet for their next fights. Brook will need to lose some weight if he’s to fight in December. He’s looking heavy at the moment, and he’ll need to train hard to make 147 for his next fight.

Khan started out saying he wanted 2 fights for a tune-up, but then he changed it up to just 1 fight. Taking 2 tune-ups would make no sense for Khan and Brook, as that would likely eat up the entire year. With Khan fighting once a year, it doesn’t make a lot of sense for him to take 2 tune-up fights. Moreover, there’s an injury risk for Khan and Brook with their tune-up fights.

Brook is proving to be injury prone lately with him suffering busted eye sockets in his last 2 fights against Errol Spence Jr. and Gennady “GGG” Golovkin. 1 tune-up would be risk enough for Brook. Khan insisting on both guys taking 2 tune-ups could result in one or both of them suffering a bad enough injury for their mega-clash to be delayed into 2019. Of course, then there would be the need for another tune-up fight for both. It could be endless. Khan should forget the idea of taking 2 tune-ups, and instead focus on just 1 tune-up fight a piece before they meet in the summer of next year.

According to Khan, he’s at the peak of his career with him nearing 31. Some boxing fans would argue that Khan’s peak passed him by 6 years ago after he was beaten by Lamont Peterson and Danny Garcia in consecutive fights. Everything since then has been largely Khan rebuilding his career at a glacial pace with long periods of inactivity. Khan blames his latest year and a half of inactivity him having hand surgery, and dealing with personal problems.

Khan’s last fight came in May of 2016 with him getting knocked out by Saul Canelo Alvarez in round 6. It was brave of Khan to move up to middleweight to take the fight with Canelo, but it ended badly for him. That’s not the reason why Khan took a 1 ½ year break from boxing. Khan’s subsequent hand surgery after the loss to Canelo has delayed his return. It’s taken Khan a long time to feel comfortable using his right hand again after the surgery. His family problems that he’s had to deal with during this time period has slowed his return to the ring. Khan seems to be finally ready to return to the ring both physically and mentally.

Khan and Brook should have made the fight between them at least 3 years ago. It would have been perfect for Brook to face Khan while he was still the IBF welterweight champion, and there would have been a world title on the line for their fight. Khan-Brook face each other in 2018, they best they can hope for is one of the sanctioning bodies like the World Boxing Council to have one of their specially created titles on the line for the fight. There aren’t any vacant major welterweight titles available for Khan and Brook to fight for. Brook would be coming down to 147 to face Khan. It might not matter to the boxing fans whether there’s a title on the line or not, but it would sure help things.


« Miguel Cotto vs. Sadam Ali in retirement fight on Dec.2

Eubank Jr. in confident mood ahead of potential Groves fight »