Eubank Jr. in confident mood ahead of potential Groves fight 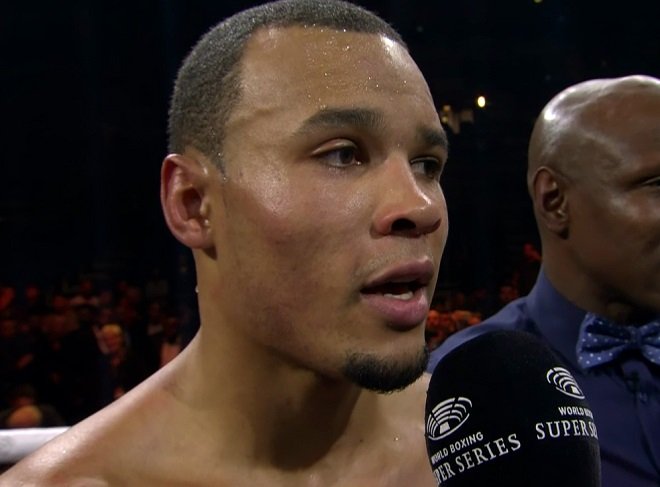 By Gavin Howie: Chris Eubank Jr. has been making some bold claims regarding sparring between himself, and George Groves a few years back. Eubank Jr. says he “dominated 90 percent of the rounds we boxed”, and also states he has actual footage of the sparring sessions. This may be the truth in what he says, but as I have not seen this footage, I can’t comment.

I do have my doubts, as he has made many bold claims over the years, without much substance. He also slags off the pre-tournament bookies favorite Callum Smith, “I’m not sure if he is still currently the favorite to win at the bookies, which made me laugh”. As it stands today, Eubank Jr. is now the favorite to win the tournament. Eubank Jr did look good in defeating Avni Yildirim last Saturday by a 3rd round TKO, but would Groves, or Smith have done the same, if not better?

Just over a year ago, Eubank Jr. had entered negotiations to fight middleweight king Gennady Golovkin, before Eubank Jr. lost his pen, and Kell Brook stepped in at the 11th hour. I had a bet on with someone who shall remain nameless, regarding whether Eubank Jr. would even get in the ring with Golovkin. I was adamant that Eubank Jr. had no intention of ever getting in the ring with Golovkin, and was correct. I also have my doubts about Eubank Jr. making it in the ring with Groves next, should he get by Jamie Cox this Saturday night. Although Groves is not as daunting a task as Golovkin, he is still a step above anything Eubank Jr. has been in the ring with, since losing to Billy Jo Saunders 3 years ago. At 29, Groves is only 1 year older than Eubank Jr., at his peak, and has been in the ring with far better quality than Eubank Jr. It would be a great fight, but Groves beats Eubank Jr. every day of the week. Eubank Jr. does not have the same kind of power as Groves, and usually beats opponents with punch volume, over actual punch power. The only reason Eubank Jr. moved up from middleweight, was because he didn’t fancy a rematch with Saunders, and there was no way he was ever going to fight Golovkin. He seen the Super Middleweight division as an easier chance to perhaps win a genuine world title, and I won’t even credit his IBO belt he wears like it’s the main championship belt in boxing. He may be right, I think he gives IBF champion James DeGale a good fight, and could beat him, but he won’t win this tournament.

The top 2 promoters in the UK, Frank Warren, and Eddie Hearn, have both worked with Eubank Jr. in the past. Neither still work with him, and have both stated how difficult it was dealing with the Eubank’s. ITV box office PPV, now appears to be the new home of Chris Eubank Jr., and forcing the British public to pay to watch a man, who has yet to win a meaningful fight in his career. He certainly has talent and charisma, but will be judged for his performances in the ring, and so far, he lost his 1 and only real test in his career. You don’t just make yourself a PPV fighter based on your father’s name. You earn it. I’m just not sure the public rate Eubank Jr., as much as he rates himself.