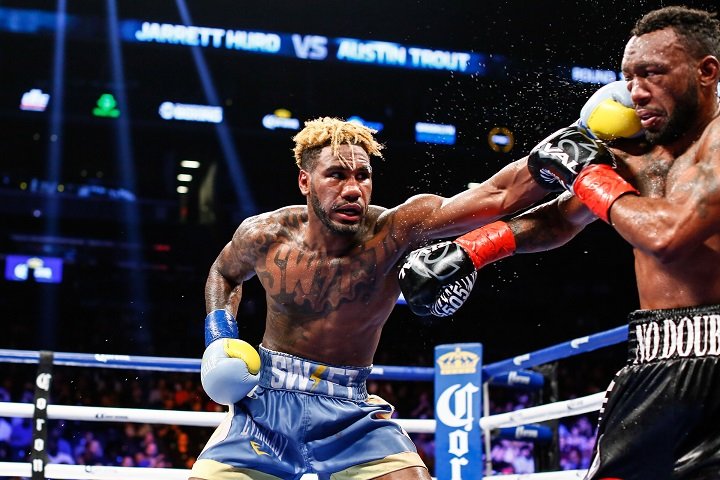 The fight was halted at the end of the 10th round, as requested by the ringside doctor. Trout was exhausted, and his legs completely worn out by the end of the 10th. Trout was hurt by a series of big shots from the 27-year-old Hurd late in the round had had him looking ready to be knocked out.

After the fight, Trout, 32, was taken to a nearby hospital to get checked out. He looked exhausted and beaten by the end of the bout, but so did Hurd. His face was a mess. Hurd suffered a bad cut over his left eye in round 6. The cut bled constantly from round 6 until the end of the fight.

Hurd seemed to just give away the first 6 rounds of the fight to the 32-year-old Trout by plodding forward and eating his left hands and right hooks as if they were cookies. Hurd showed no defensive skills whatsoever. He was like another Arturo Gatti with the way he led with his face. If Trout had the punching power of Jermell Charlo, Hurd would have had a tough time making it to the 6th. Hurd was definitely bothered by Trout’s shots. He might have wanted to make it seem like he wasn’t. but those punches had his face reddened.

By round 8, both fighters looked exhausted. But in the case of Hurd, he looked more punch drunk than truly tired. He’d absorbed so many punches from rout hat it seemed to wear him down. Trout was even more tired, which is why Hurd was able to walk him down and win the fight.

At the time of the stoppage, Hurd was ahead on the scorecards by the scores 96-94, 97-93 and 96-94. Boxing News 24 had Trout ahead 6 rounds to 4. Hurd resembled a punching bag in the first 6 rounds of the fight, and it was impossible to give him any of those rounds. It was only after Trout grew tired in the second half of the fight that Hurd was able to come on and walk Trout down and win rounds. Hurd didn’t appear to do enough to hard the lead at the time the fight ended. Hurd took too much punishment in the first 6 rounds. Even in round 8, you can argue that Trout did enough to win it, which would mean he was ahead 7 rounds to 3 at the time the fight ended.

After the fight, Hurd had this to say when he was asked by Showtime Boxing if he wants to fight Jermell Charlo or Erislandy Lara:

“Most definitely, I’m ready to unify. I will take on Lara or the winner of Lubin-Charlo. We’ll take that fight too. It’s most definitely tougher to defend the title than win it. I’m always the one that comes on stronger at the end of the fight. We knew we were going to wear Austin Trout down in the later rounds and eventually stop him. My cut made me a little better with my head movement.”

This was far from an easy fight for Hurd. He took a great deal of punishment from an older guy, who had been inactive for 1 ½ years leading up to this fight. It wasn’t a good sign for Hurd to struggle as bad as he did against Trout, because he says he wants to fight Jermell Charlo or Erislandy Lara. Those guys hit harder than Trout, and have better boxing skills.

The way that Hurd fought, he’s EASILY the weakest of the 4 champions at 154. Hurt looks like the weak link by far. I can’t picture Hurd beating Jermell Charlo, Erislandy Lara or Miguel Cotto. I think Hurd would have lost to Erickson Lubin tonight if he’d been in there with him. We saw what happened with Lubin with his 1st round knockout loss to Jermell Charlo.

This is what Charlo had to say about wanting to fight Hurd next:

“We’re going to unify. The other champions want to fight me and I’ll take any of them. Give me another title. I want Hurd. Hurd just won. Give me Hurd.”

If Hurd is serious about wanting to unify the division, then he has Charlo ready to face him immediately. Hurd needs to pull the trigger on the Charlo fight before he looks to face someone else.

In hindsight, Trout made a mistake of fighting at such a fast pace in the first 6 rounds of the fight with Hurd. If that was the game plan for the fight, then it was a foolish one. Trout has never fought at a fast pace in the past like he did tonight, and he was coming off a near 2-year layoff from boxing.

To use a fast place game plan, you only want to do that if you’ve been active and you can truest your cardiovascular system to handle to a high energy pace. It would maybe have worked if Trout was working hard on conditioning in the last 17 months during his off time. Somehow, I don’t think Trout has been doing that. I think he’s more likely than not been taking it easy at home, sitting on the couch and watching TV. What Trout should have done was throw punches and then wrap Hurd up in a clinch to prevent him from being able to get his shots off. Trout could have conserved energy fighting like that and he would have been still strong in the 10th. Trout came into tonight’s fight with Hurd as the more experienced fighter, but he didn’t fight like that.

At this point, Trout may need to start thinking about retiring from boxing. This was his second consecutive loss. He was beaten by former IBF 154 lb. champion Jermall Charlo by a 12 round unanimous decision on May 21 last year. Trout did better against Charlo than he did against Hurd. The likely reason for that is because Trout had been active and not sitting around for nearly 2 years like he did going into tonight’s fight with Hurd.