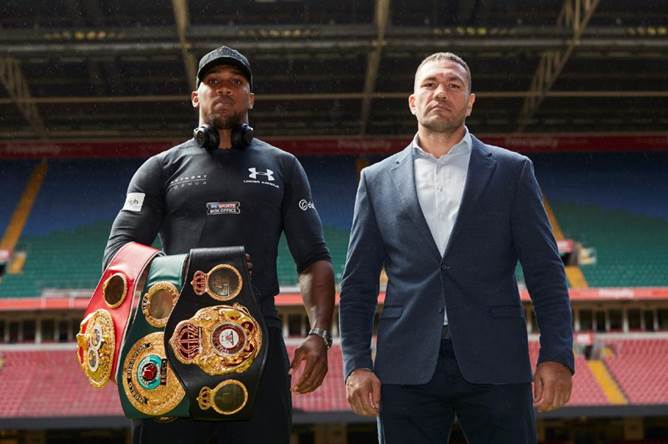 By Allan Fox: Heavyweight champion Anthony Joshua (19-0, 19 KOs) will be getting a career high purse of $20 million for his title defense against Kubrat Pulev (25-1, 13 KOs) on October 28, according to the express.co.uk. 36-year-old Pulev’s purse will be $5 million, which is quite good for a challenger.

Joshua’s $20 million dwarfs the $5 million that Pulev is getting for the fight. But most heavyweights would jump at the chance to get $5 million fighting Joshua. Deontay Wilder making $1.5 million for his fights at heavyweight, it shows you how well Pulev will be doing against Joshua.

It’s unclear what the taxes will be on the money Pulev brings back to his home country of Bulgaria. But if he can bring home most of that money, he would be doing well even if he never gets another world title shot for the remainder of his boxing career. Pulev has the talent and the promoters to get him another title shot within 3 years if he comes back strong from a loss to Joshua. It won’t be hard for Pulev, especially if he faces the mostly journeyman level opposition that he beat to get this title shot against Joshua.

This will be Pulev’s biggest payday of his 8-year pro career. Pulev had a long amateur career in Bulgaria, which included him competing in the 2008 Olympics. Pulev arguably should have turned pro at earlier age rather than spending so many years fighting in the amateur ranks. He likely thought he could win a gold medali in the Olympics. Unfortunately for Pulev, he was eliminated in his first match of the 2008 Olymoics in losing to Oscar Rivas (Colombia) by a 11-5 score.

Joshua’s $20 million purse is more than he made for his fight against Wladimir Klitschko on April 29 of this year at Wembley Stadium in London, England. If the $20M is correct, it suggests that Joshua’s popularity is increasing with each and every fight.

Joshua vs. Pulev will be taking place on October 28 at the Principality Stadium in Cardiff, Wales. The stadium seats 74,500 boxing fans. For it to sellout for a fight that amounts to be a mismatch in favor of the 27-year-old Joshua shows what kind of star he’s become in the UK. The boxing fans want to see Joshua fight in huge numbers even when he’s facing someone that is up there in years and has little in the way of punching power in Pulev.

There’s a lot riding on this fight for Joshua, as he’s got to get past the 6’4 ½” Pulev for him to get to the much bigger fights against Deontay Wilder, David Haye and Joseph Parker in 2018. Those are 3 fights that will make Joshua a ton of money.

With Joshua getting $20 million for Pulev, he might be on his way to becoming a billionaire like he spoke of in the past. At 27, Joshua could have another 10 to 15 years as the top heavyweight in the division. If Joshua’s paydays increase exponentially with each fight, it won’t be long before he’s making 9 figures per fight just like Floyd Mayweather Jr. Mayweather’s last 3 fights have brought him a fortunate of over $500 million. That’s just 3 fights. Joshua heading towards the same status as Mayweather would be scary, since he’s still not even 30. Joshua can make a fortune before he’s finished with his career. Joshua’s huge size at 6’5”, 245 lbs. means he doesn’t have to take punishment like other heavyweights do. Joshua is big enough to drop his bombs from the outside without getting hit in most of his fights. Where Joshua could have problems is when he eventually faces 6’7” Deontay Wilder, who has the height, reach, speed and power to land his concussive power shots.

Joshua will be defending his IBF/WBA heavyweight titles against the Bulgarian Pulev. This would have been a great fight if it had taken place before 3 years ago before Pulev was knocked out in the 5th round by Wladimir Klitschko. That defeat took a lot of the steam out of Pulev’s boxing career. He went from being the guy that was viewed as a threat to Klitschko, to that of a one-dimensional fighter without the power to take his career to the next level. Now it’s been 3 year since that fight, and Pulev has done anything of note to deserve this latest title shot against Joshua.

Pulev’s wins since his embarrassing loss to Klitschko have come against this mediocre lot:

Those are not major players in the heavyweight division. Chisora was a top guy at one time, he’s now scraping to keep his head above water. To his credit, Pulev did do a better job beating Chisora than British heavyweight Dillian Whyte recently did.

Joshua had all he could handle in his last fight against Klitschko on April 29. Klitschko didn’t do much other than move around the ring to survive until the 6th. In that round, Klitschko was getting pummeled early on. When Klitschko finally started fighting back for the first time in the entire fight, he surprisingly dropped Joshua. It wasn’t a fluke thing. Joshua was seriously hurt and completely exhausted. But rather than continue to fight to finish the fight, Wladimir went back into his survivalist mode, and he let Joshua escape when he probably could have taken him out with one hard right hand to the head.

Pulev has to be licking his chops at seeing how fragile Joshua looked against Klitschko. Pulev doesn’t have Wladimir’s pedigree or near the same power as him but he hits hard enough to knockout most fighters when he’s sitting down on his shots.


« Eubank Jr. in confident mood ahead of potential Groves fight