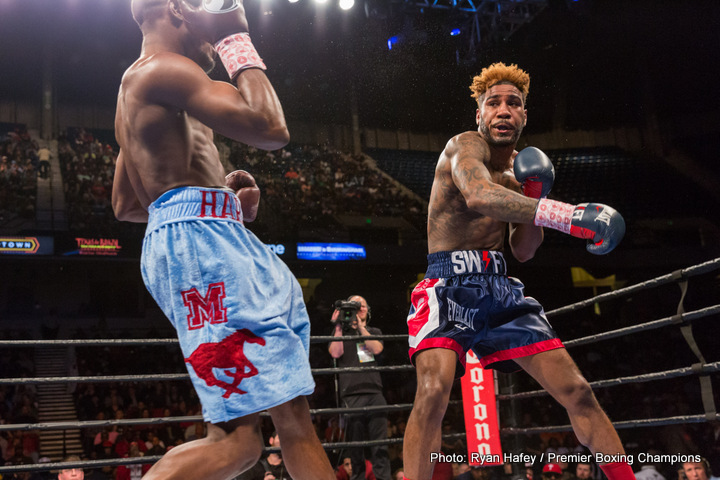 By Dan Ambrose: IBF World junior middleweight champion Jarrett Hurd will be defending his title for the first time next month against former WBA 154lb champion Austin Trout on July 29 at the Barclays Center in Brooklyn, New York. Hurd, 26, needed to get an exception to face #14 Trout by the International Boxing Federation, because he was supposed to fight #3 IBF Cedric Vitu in his first defense.

The IBF instead let Hurd (20-0, 14 KOs) take the fight with the former WBA champion Trout (30-3, 17 KOs), who is arguably better known that Vitu due to him being a past world champion. The winner of the Hurd-Trout fight has 90 days to face Vitu or else the IBF will take their IBF 154lb title away by stripping them. The winner of the Hurd vs. Vitu fight must face Vitu by December 29.

The 31-year-old southpaw Vitu hasn’t beaten many notable fighters during his 12-year pro career. It’s unclear why Vitu is rated so highly by the IBF. Based off Vitu’s flimsy resume, he’s lucky to be ranked in the top 15 at all. Vitu was beaten by Siarhei Rabchanka by a 12 round split decision in 2012. That’s easily the best opponent Vitu has fought during his pro career, and he lost to him.

Rabchanko has a recent 9th knockout loss to Tony Harrison in 2016, which kind of tells you a lot about Rabchanko, The fact that Vitu lost to him doesn’t say much about him or the IBF’s rankings. The rankings don’t make much sense. Never the less, it’s good that Hurd will be facing a good fighter in Trout.

Trout, 31, has fought well-known fighters Miguel Cotto, Saul Canelo Alvarez, Jermall Charlo and Erislandy Lara. Those fights put Trout on the boxing map, making him well-known to a lot of fans. Trout’s career has tanked since his loss 12 round unanimous decision loss to Canelo Alvarez four years ago in April 2013. Trout lost his next fight after that against Lara. Since then, Trout has won 4 out of his last 5 fights in the last 3 years.

Trout’s only loss was a recent 12 round unanimous decision defeat to Jermall Charlo. Trout gave Charlo a lot of problems in the second half of that fight with the way that he rallied to make it close. Charlo gassed out badly in the last 4 rounds. Charlo had problems making weight for the fight, and it left him in bad shape down the stretch. Trout deserves a lot of credit because of the pressure he put on Charlo, forcing him to fight harder than he was willing to fight.

Hurd recently beat Tony Harrison by a 9th round knockout on February 25 to claim the vacant IBF World 154lb title at the Legacy Arena in Birmingham, Alabama. Hurd struggled through parts of that fight. However, after Harrison faded late in the fight, Hurd was able to come on to get the knockout win in the 9th.

For Harrison, it’s now becoming a pattern for him to fade late in his fights and get stopped in the 9th against good opposition. Harrison was knocked out in the 9th round in 2015 by Willie Nelson. Hurd was very lucky that he only had to fight Tony Harrison for the IBF title instead of Jermall Charlo, because he probably would have lost that fight. Charlo hits too hard, and Hurd isn’t exactly difficult to hit. The punches that Harrison was bouncing off Hurd’s chin would lilkely have been knockout blows if it had been Jermall throwing them.

It’s going to be interesting to see how much Trout has left after his loss to Jermall Charlo last year in May. It’s been a little over 1 year since Trout took the fight to Charlo, which is good news for Trout. He was hit a lot by Charlo. It’s definitely a good thing for Trout that he’s been resting for the last 13 months since losing that fight to Charlo. Trout would likely beat Hurd if he were the one fighting him last year instead of Charlo. Hurd is a decent fighter, but still very flawed.

You can make a strong argument that Hurd is the weak link among the 4 current world champions at 154. I definitely rate Hurd below WBC champion Jermell Charlo, WBA champions Erislandy Lara and Demetrius Andrade. The World Boxing Organization 154 title is vacant at this time after Saul Canelo Alvarez vacated the belt recently after beating Liam Smith to win the belt. Miguel Cotto and Yoshihiro Kamegai will be fighting for the vacant WBO 154lb title. Trout already beat Cotto 5 years ago in 2012.

Trout’s loss to Canelo Alvarez in 2013 was close enough to go either way. The fight was a lot closer than the scores from 2 of the 3 judges that worked the fight. One judge had an embarrassing 118-109 score in favor of Canelo. It was sad scoring. Trout deserved a draw if not a win. But in looking at the scoring for the fight, you could see what Trout was up against.

It wasn’t going to win that fight, especially with the pro-Canelo crowd the Alamodome in San Antonio Texas. Trout’s only loss in which he was beaten decisively was his 12 round decision defeat at the hands of Erislandy Lara in 2013. The timing for Trout to fight Lara was bad one with Trout having lost his last fight to Canelo. In hindsight, Trout probably should have taken 2 or 3 confidence boosters after the Canelo fight before fighting someone as good as Lara. It was not a good idea for Trout to fight Lara in his next fight after the Canelo bout. That was poorly thought out.

Trout has the talent to beat Hurd if he’s at his best. The only thing we don’t know is how much the long layoff and the punishment in his loss to Charlo will affect Trout. If he’s at his best for the Hurd fight, then he’s likely going to win the fight, because is someone that can be beaten. Trout has the style to give Hurd all kinds of problems. Trout will need to go to war for him to beat Hurd.