Brook ready for Spence, says GGG fight was a positive 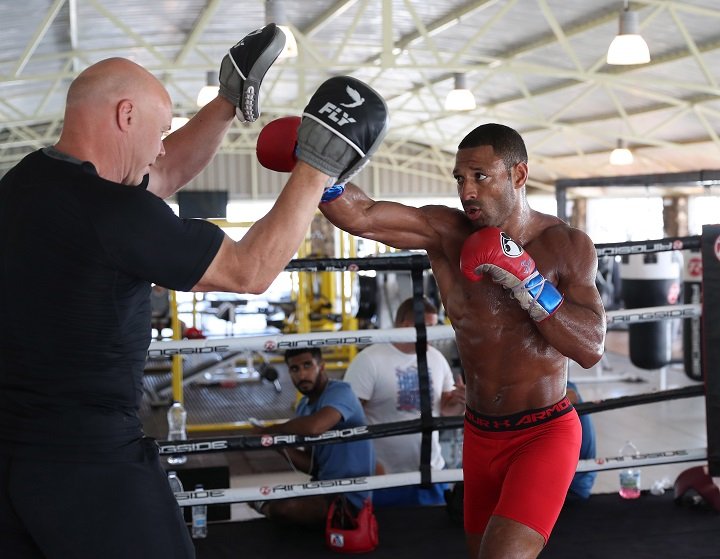 By Scott Gilfoid: Kell Brook is coming into the Errol Spence Jr. fight on May 27 after having been badly injured in his 5th round stoppage loss to unbeaten middleweight champion Gennady “GGG” Golovkin last September. The loss to Golovkin was forced because of a broken eye socket that Brook suffered earlier in the fight.

”I was in there with the big, most-feared middleweight there is but I showed I could stand with him,” Brook said to skysports.com. “I sent out the blueprint to show that I am worth being at that level and for all the negatives that came from it, they all turned into positives. I took nothing bad from that fight. It is one big positive. You will see.”

I personally think Brook didn’t come out ahead from him fighting Golovkin. Despite Brook thinking it was a positive for him to fight Golovkin, I think the eye injury he suffered and the subsequent beat down that he took in the fight made it not worth it in the long run.

Here are the positives that Brook got from the Golovkin fight:

– Respect from fighters and boxing fans for facing Triple G

– The illusion that Brook created the blueprint to beat Golovkin, even though he lost the fight.

– More attention from the fans and boxing media. Before the Golovkin fight, Brook wasn’t widely known by many of the casual fans due to him fighting largely weaker opposition during his 13-year pro career. Brook was unbeaten, but you can argue that the main reason for that was because he was fighting beatable guys like Matthew Hatton, Hector Saldivia and Vyacheslav Senchenko instead of the very best at welterweight.
Here are the negatives that Brook got from fighting Golovkin:

– Suffering a broken right eye socket. We don’t know how that eye will respond from contact once Brook starts getting hit hard in that area. Brook is saying the eye is 100 percent after surgery, but we don’t know if that’s the case. The eye remains a real unknown at this point. We’ll know more about it after Brook fights Spence on May 27. I wouldn’t be surprised if Brook’s eye swells up and closes at some point during the Spence fight. If that happens, then you’ll have to conclude that it was a negative that Brook fought Golovkin.

– Brook took a lot of heavy shots from Golovkin in the 5 rounds. We don’t know how those shots will impact the remainder of his career.

– Losing the way Brook did against Golovkin could make him less confident in future fights. When unbeaten guys get blown out the way that Brook was by Golovkin, it sometimes impacts their confidence.

We don’t know how Brook would have done if he hadn’t suffered the injury. Never the less, the early moments of the 1s round of the Golovkin-Brook fight gave us a brief glimpse of how the remainder of the match had gone if not for Golovkin breaking Brook’s right eye socket with a crushing left hook in the last moments of the round. Unfortunately, what happened is now history and there’s nothing that can be done about it.

Brook DID suffer the broken eye socket and he DID spend pretty much the remaining 4 rounds on the run, trying to get away from Golovkin instead of fighting him. For all intents and purposes, the battle was lost in the 1st round for Brook after he suffered the eye injury. Brook was done for the most part after the 1st. Brook threw a brief flurry of shots in the 2nd round, but he didn’t want to stay and fight Golovkin. That was Brook’s best round and it wasn’t that impressive because he ran most of the time.

Whatever moral victory Brook wants to take from the Golovkin fight, it doesn’t mean squat for him in the Spence fight. Spence isn’t going to slap Brook on the back, and say, ‘Great job with the Golovkin fight. I’ll now be giving less than 100 percent because of your great fight with GGG.’ Brook is going to find out the hard way that whatever he did in the past is meaningless. In boxing, fighters don’t care what you did in the past. You’ve got to prove yourself all over again with each fight. Brook seems to be sitting back, lost in his reverie in glorifying his fight against Golovkin last September.

Instead of putting things in perspective and realizing that he lost the fight to Golovkin, Brook keeps thinking about the fight as a positive. I think that’s a big mistake. Brook needs to think about fixing the mistakes he made in the Golovkin fight so that he doesn’t make them against Spence. We’ve already heard from Spence that when he looks at Brook’s fight with Golovkin, he was looking for flaws in Brook’s game that he can take advantage of. Spence is looking at Brook’s past fights like a scientist in picking out areas in his game that he can take advantage of.

I’m not sure that Brook is doing the same thing with Spence. I think Brook is still looking backwards instead of forwards with his game. As baseball great Satchell Paige once said, “Don’t look back. Something might be gaining on you.” It’s fine to look back at your past fights to pick out mistakes that you need to improve on, but it’s a waste of time if you’re looking back and getting lost in being proud of having lost to a particular fighter. I think that’s a big mistake that Brook is making with his defeat to Golovkin.

“I am champion of the world for a reason. They call me the ‘Special One’ for a reason and I want to show the world why, by using everything I’ve learned throughout my career, even the Golovkin fight,” said Brook.

Brook is the IBF champion because he beat Shawn Porter in 2014. Brook got away with clinching Porter over and over again in each round without being penalized by the referee working the fight. In my opinion, Brook should have lost the fight to Porter if the referee had taken points off from him for holding him all night long. I re-watched the Brook-Porter fight this week, and I’m just baffled at how Brook was able to get away with holding Porter as often as he did. Brook didn’t beat Porter in a conclusive manner by out-hustling him or out-classing him. Brook beat Porter by doing a lot of holding to keep him from throwing punches. The referee working the fight should have done something about it by taking off points from Brook or disqualifying him. I hope that Brook doesn’t choose to hold Spence all night long like he did against Porter, because that would make the fight really ugly to watch on May 27.